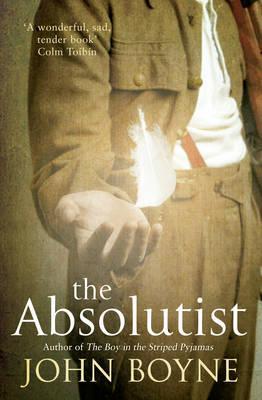 I picked up The Absolutist in a second hand shop recently for something like 50c. I’ve enjoyed John Boyne’s books up to now, I haven’t read the Mutiny one as yet as leafing through it, I wasn’t sure I’d have the stomach for it. All of his books stay with me and while that probably shows how good they are, I’m a bit of a wimp when it comes to historical fiction that is brutal and you know it was very very close to the truth.

The Absolutist is set around World War One. Tristan Sadler has survived the war, the only one of two survivors from the twenty in his regiment. Aged only 21 now, he was underage when he signed up to join the war. ?He is on the way to visit Marian Bancroft for the first time, sister of Will, whom he trained with and fought alongside in the trenches. In 1917, Will laid down his guns and declared himself a conscientious objector. While other conscientious objectors became cannon fodder as they were sent out as stretcher bearers and usually lasted days if not hours before they were shot and killed, absolutists refused to do anything to help the war effort. ?He was shot as a traitor. ?His family are suffering – not just because he is dead but because he died as a traitor. ?A memorial is going up in the town for all those who lost their lives in the war and Will’s name won’t be on it.

Tristan is bringing letter to Marian, letters that she wrote to Will during the war. ?Both of them are eager to hear stories of Will, to exchange memories. Tristan is surprised to hear that Marian thought he was dead, not just because she never heard from him but because Will had told her so, shortly after they arrived in France. ?Why did he do that? ?Tristan has a secret, something that is burdening him – will he have the courage to tell Marian?

Tristan is the son of a butcher, his father has cast him away and refuses to see him, even telling him that it would be better if the Germans shot him on the first day. We soon find out why but what is also noticeable is the difference between the two men – in terms of language, brutality, loyalty and outlook on life.

We have all heard of the terrible conditions of being in the trenches, the trench warfare, the rats, the floods, the constant bombardment, the terror, so many young men killed. And yes, we’ve heard of the ‘white feathers’, of men punished for not fighting, no matter what their reasons were. ?What Ireland has lacked though are the personal stories of men killed, yes, so many Irish men fought in the war but their families didn’t tend to speak publicly of it. ?As farmers, I’ve no knowledge of any of our ancestors that fought, they seemed to stay and farm the land. But within the farming communities there were younger brothers that went to fight and many were killed. This is one reason the book resonated with me, although fictitious, it is a personal story of a survivor from WW1 and how events shaped the rest of his life.

It deals with many issues – bullying, homosexuality, familial ties, fear, pacifism, sibling ties, guilt, but it really throws up the terror and confusion that must have been felt by these young men. And yes, it makes it all seem so senseless in a way.

When reading this book, I so admired how it had been crafted. A simple story and through the use of flashback, memories and excellent dialogue, it kept me captivated. Although I suspected what the second secret might be, it still shocked me. I enjoyed the book for its look at humanity and indeed, man’s inhumanity to man.

One thought on “Book Review: The Absolutist by John Boyne”