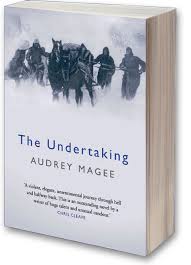 I ordered The Undertaking by Audrey McGee earlier in the week, having heard her interviewed recently on the radio, I thought it sounded like one of those books that just had to be read. When it arrived in the post from Kennys Bookshop, I started reading it while waiting for the spuds to finish cooking – let’s just say we had rather overdone potatoes for dinner. I couldn’t put it down.

Set in World War Two, many have described it as very dark. Yes, it is but there is a vitality throughout and the storyline just keeps the pages turning. Much of it is told through dialogue too which makes it seem much more ‘real’ and moves it along at a fast pace too. Dialogue is a really hard nut to crack in writing, I cringe when I read novels when the dialogue is overlong or sometimes doesn’t ring true for a character but McGee does it so well.

We don’t tend to consider the German side of things when we think of WW2. When we think of Germany, we think of the Nazi concentration camps and their extermination of six million Jews, we wonder why didn’t the ordinary Germans do anything to try and stop it, were they aware of what was going on, did they agree with it? ?We don’t think of their suffering during the war or even post-war as Germany had to rebuild.

The novel tells the story of Peter and Katharina who marry for convenience. He, to get away from the war front for ten days leave. Her, to get a widow’s pension if he dies. However, it becomes much more than a marriage for convenience. They enjoy the passion of their honeymoon and seemingly fall in love. As time moves on ?and she gives birth to their son, you wonder how much of their love actually exists to give them a reason for survival – is it the idea of being in love that keeps them going. Peter needs a reason to keep fighting and enduring horrific conditions. Rather than think of himself as Berlin’s cannon fodder, he believes he is fighting to make the world a better place for his wife and son. ?Katharina has had enough of being a dutiful daughter, she wants to be independent and live in her own house or apartment with her husband and child. ?As far as the Nazi Party was concerned, their wedding is part of the ‘breeding programme’, an attempt to fill the world with Germans.

Katharina Spinell and her parents are welcomed into the Nazi party as they move into a lovely apartment recently vacated by Jews. ?The Dr Weinter and his comrades are favoured by the Fuhrer. We see enough of the Spinell poverty to see how things might have been for them if they hadn’t received these favours of food, coal and other gifts. The ruthlessness of the ‘Party’ is shown when Katharina is turned away when her son needs medical helps and when her father insists that their shellshocked son can’t go into the cellar during bombing and has to return to the front – all for the sake of the cause even though his death is certain. ?The dinner parties in Berlin are contrasted with the women queuing for hours for rations and then to the soldiers fighting in Russia, fighting through snow, killing Russian villagers so they will tell them where their food is. There is one mention of rape by German soldiers when some of them pinpoint an attractive young Russian woman. ?(Apparently there are very few reported rapes by German soldiers during the war compared to?2 million German women being raped by Russian soldiers when the war has been lost – it just shows how rape was used as power and to impregnate).

Katharina has to endure a rape by Russian soldiers. As they all sit waiting, they all know it is inevitable. They even say that the waiting for the Russians to arrive is worse. Although this is a book that describes the worst kinds of cruelty and depravation (Peter is taken prisoner and has to endure various torments too), the human spirit somehow survives. ?Katharina decides to stay in Germany, with women who have experienced what she has. She feels Germans are hated worldwide and she wants to stay where she knows.

I can see this book being adapted into an amazing film – a film that will be hard to watch in many ways. ?When I heard McGee’s interview, she spoke about how she struggled with wondering if she was entitled, as an Irishwoman, to write a book from the perspective of a German woman. ?It definitely works and even more so because it is written from an outsider, an outsider who, like the rest of us, grew up with sympathy for the Jews and everyone else who suffered at the hands of the Nazi, grew up knowing what it felt like to be the victors (Yes, I know Ireland was neutral but it was more Allied-neutral than German-neutral and so many Irish fought for the UK that we knew which side we were on) and yet reveals what it was like for a certain sector in Irish society.

Do read it – I thought it was wonderful.

3 thoughts on “Book Review: The Undertaking by Audrey McGee”