You might remember me telling you about a calf we named Arthur dying some time ago. As he was born from our best cow, we were hopeful that he would be accepted by an AI station. And yes, they would have taken him to try him out. The good news though is they took another one. It will be the autumn before we find out if he will definitely be fathering lots of calves but here’s hoping. 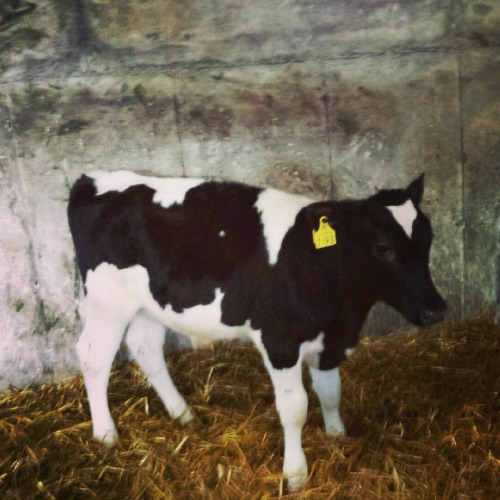 We had to register him as pedigree and decide on a name. As the previous one was called Garrendenny Matchmaker, I wanted to keep up the dating / matchmaking / marry a farmer theme so we decided on the name Bachelor. I was thinking of the name as having the connotations of ‘eligible bachelor’ but when the pedigree certificate came, it bore the name ‘Batchelor’! All I could do was laugh realising he’d have the connotations of baked beans. Brian said to leave it and we could call the next one Heinz but I rang up and it was changed no problem.

We went for a ‘traditional cow’ name for his mother so she is Primrose.

Yesterday was the longest day of the year. No news there but I have been blessed with a farmer who doesn’t get tetchy on the full moon (apparently lots of others do) but you can multiple his tetchiness by twelve when it comes close to the longest day of the year. He loves the long hours of daylight and if not working on the farm, will potter away in the garden until near midnight if at all possible. As a busy farmer, he always has a long to-do list and once that sense of ‘the year is flying past’ hits him, he expects me to do a million things in a day too such as tidy up the garden, wash windows, paint the kitchen, help him do a thousand things on the farm. ?I’m thinking to myself that I have a month to get this book completed and to my editor and I just want to go into a writing cave and have someone cook dinners and keep the house clean so I can just emerge every so often to be fed and watered. At this stage I’m used to his tetchiness and I just smile and nod, knowing it will pass in a week or so.

Listening to a discussion on the John Murray Show last week about what makes a good wife, I was amused to hear Mairead Lavery say how she and her husband share the cooking at weekends and how if you had to cook all the time, it would be a chore. Yes, Hello! Besides keeping kids clean, house in an orderly state and despite the fact that I don’t really like cooking, muggins here cooks almost every day. I couldn’t even get him to go out for Sunday lunch yesterday for Father’s Day as he didn’t want to waste gardening time going out for the day! Gosh, I’m surprised I’m not the tetchy one.

Farm wives out there – how many of you get meals cooked for you – I want to know! 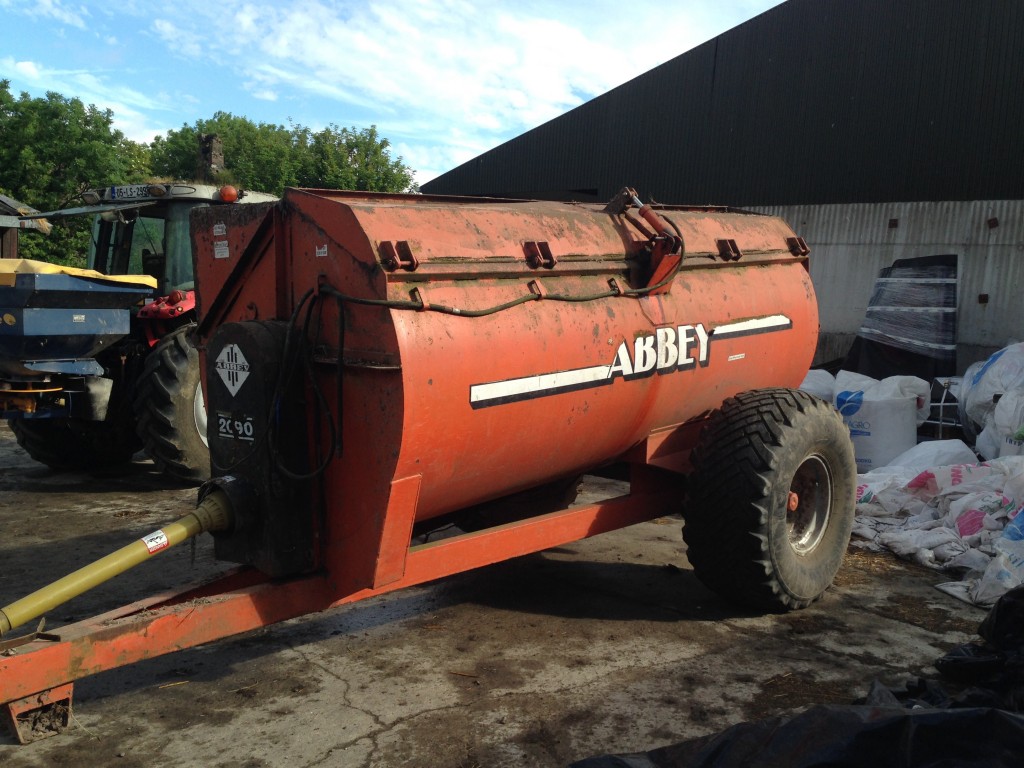 At least his Father’s Day present arrived on time – a second-hand dung spreader. ?We do know how to live!

Whenever I see a farmer out and about, if I do give any consideration to how he is turned out, I would assume his attire is his own responsibility. If he is scruffy, he’s a scruffy kind of guy or else he’s very busy at that time of year. If he’s well turned out, I guess he takes care of that himself. I was amused then to overhear a conversation when a couple of women were wondering what kind of women send some men to the mart, given the state of their attire. It seems that it is the woman in a farmer’s life who is responsible for how he is turned out – whether she is his mother or his wife.

My husband is sometimes very scruffy. There are times when I’m busy and I do wonder if I should change before I run down to the local shop or the creamery. If it’s in the winter, I can cover up a lot with a hat and a long coat but it’s not so easy when the weather gets warmer. I tend to hold the opinion that men won’t notice how I’m dressed and if a woman sees me dressed in jeans splattered with muck and looking scruffy, if they don’t know me it doesn’t matter. On the other hand, if they do know me, they know that I can dress reasonably well at other times. I guess I don’t tend to worry about the fact that some will think to themselves ‘would you look at the state of yer one’.

Given that the woman in a farmer’s life is responsible for his appearance – I really hope people realise that our beloved ten-year-old daughter is now chief clothes mender. She was on a mission to repair all the tears in Brian’s clothes particularly torn pockets. One shirt didn’t have a chest pocket (and they are so handy for the mobile phone) so she sewed one on. 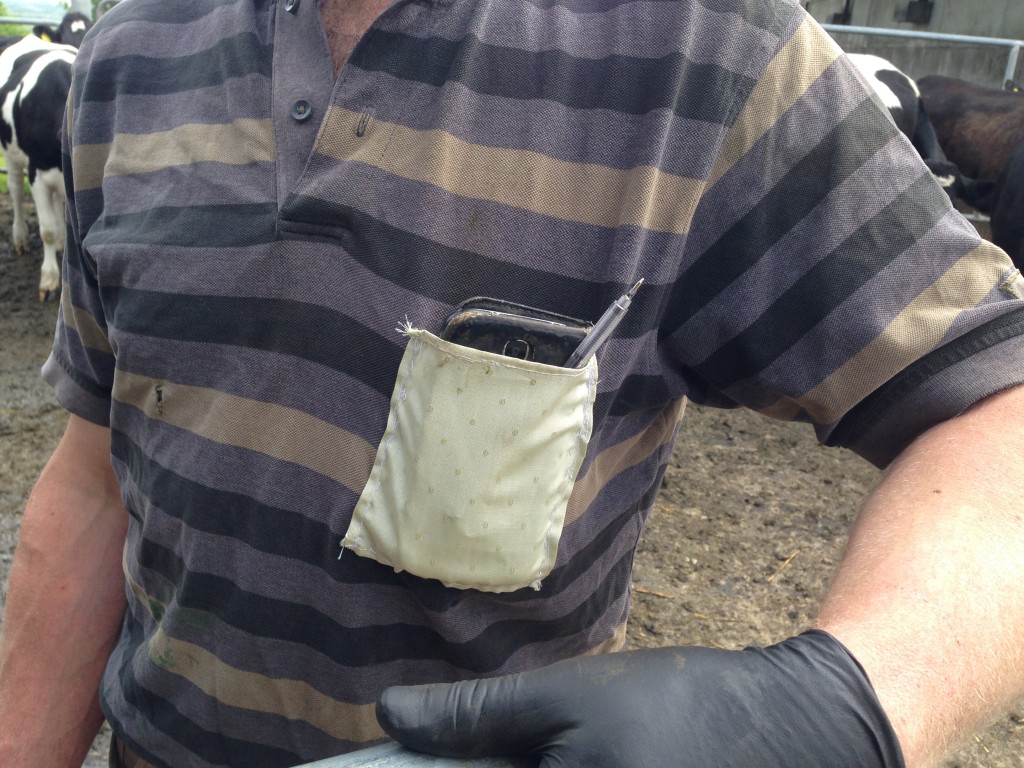 I think she did a great job but maybe critical commentators mightn’t be as appreciative of her efforts and her choice of coordinating fabrics – we were in hysterics wondering what some comments might be. What do you think?

I’m attending the Wexford literary festival next Saturday. I’m delighted to be speaking on the self-publishing panel but even more so, I’m looking forward to meeting other writers like Louise Phillips and Felicity Hayes McCoy for the first time as well as listening to what they have to say. I really enjoyed the festival last year – it’s informal, smaller than most others and intimate with lots of great speakers.

As you probably know, Amanda and I aren’t running the blog awards anymore (delighted to say another company is taking it over so it will continue) but we are running a summer event. Follow the Recipe is a summer evening social media conference with content relevant for food businesses, food bloggers and food lovers. It’s being held in Dublin and we’d love if as many people as possible came along.

2 thoughts on “My Farming Week: What’s in a name?, Tetchy Farmers, Sewing and Who Cooks?”