Milk Quota Is No More

Well, the milk quota is well and truly over now – we are 12 days past it and every possible future scenario has been flagged by farmers, journalists and advisors. Irish dairy farmers will be paying superlevy fines of up to ?75million spread over the next three years. It sounds mad doesn’t it? I do wonder why so much expansion had to happen before the quota actually ended. The end of the milk quota has been cogitated, ruminated over, contemplated, discussed, celebrated, commiserated – but it’s not like it was a surprise, we knew it was coming. I have to admit as 1st April was the first non-quota day, I was wondering would someone suddenly announce that it was all a big April Fool’s joke?! 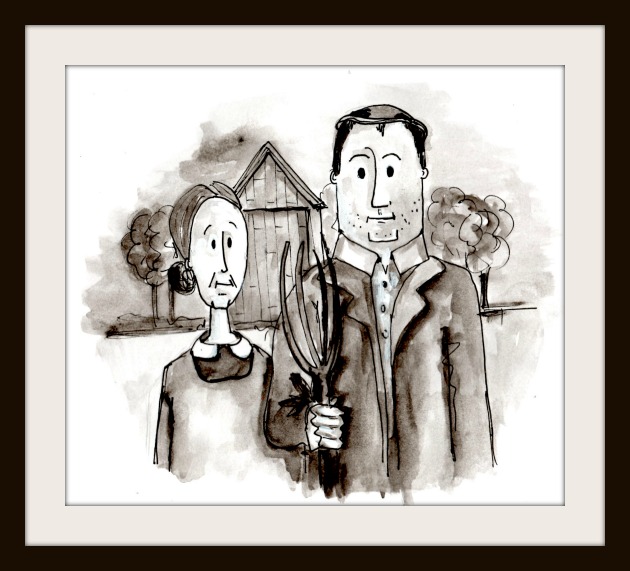 Will we end up as old married dairy farmers??

The number of dairy farmers in Ireland at the moment stands at 18,000 and it is predicted that it will decrease to 10,000 within ten years or less. Farmers have to get bigger to stand still in terms of income so it is presumed that those who aren’t making sufficient income and can’t get bigger because of lack of land or infrastructure will get out. Of course, reasons for leaving dairying may be due to lack of a successor on the farm. Others wonder why other farmers aren’t getting into dairying as though suckler, beef or sheep farmers are now the poor relations! Some predict that dairy farmers are milking white gold as the sky is the limit now. Others predict that they will be facing finanical ruin as prices will be so volatile. Mind you, they were volatile even with milk quota, 2009 was a year that saw a very bad summer weatherwise and poor milk prices. Dairy farmers in the UK are struggling with low milk prices at the moment so who knows what way it will go.

The cost to the enviroment has been flagged as though all this extra fertiliser to grow grass to make milk will make it into the rivers (we’re actually limited as to how much we spread). There’s concern over the flatulence from dairy cows but although dairy cows will increase in number, they will probably replace suckler cows on many farms.

Some feel that dairy farmers should be compensated for their milk quota. It’s true that it did have a value, for example, if we had sold ours a few years ago at 30c, it would have been worth ?120,000 but I think most farmers are just so glad to see the back of it. There’s a lot of farmers that have wanted to expand ten and twenty years ago and found the unavailability and the price of quota made it difficult. Many will expand by ten or twenty cows, some will triple or quadruple production.

Some farmers milked a cow at midnight to mark the occasions, others chinked champagne glasses. I think most of us just saw it as another day and wondered what time the milk in the tank would be collected as it was getting very full!

The emphasis now is how to increase milk volume from individual cows but also increase protein and butterfat. There has never been a quota on protein but the butterfat did affect quota volume. We will see more emphasis on good grass management and compact calving as every missed heat will cost farmers money and it’s more important than ever to get cows calving every 365 days or less. The breeding season will start in three or four weeks for most Irish dairy farmers so many will be observing cows and heifers for signs of heat over the next week, making notes on little white books or on smartphone apps.

I was loaned this old book (as research for my forthcoming book) and there were some fascinating insights into rural life within its hundreds of pages. Published in 1850, it shares the latest veterinary and agricultural research of the time. 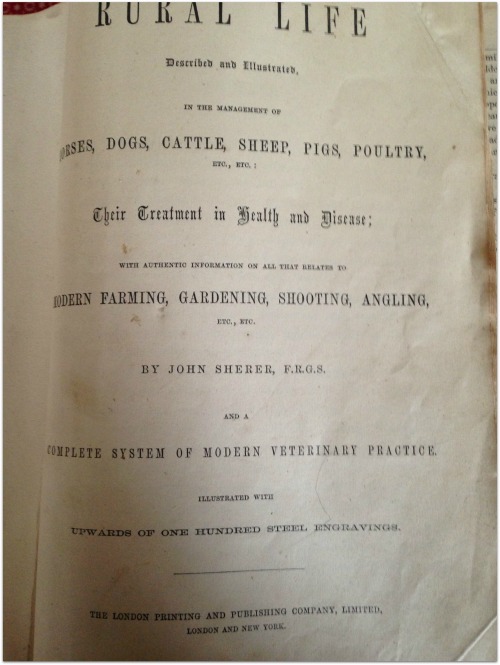 The following experiment was proving popular at the time: Once a cow had reached its 5th or 6th gestation, the ovaries were removed five or six weeks after calving. Apparently that could be performed without an external incision. As a result, it was found that milk became more regular, there was ‘full abundance’ for a year. Although volume decreased over the following two or three years, it was believed that the quality of milk was better. They believed that when a cow was on heat that it affected the taste of her milk and hence affected the quality of the butter. It was ascertained that the milk from ‘spayed’ cows was creamier, richer in ‘caseum’ and was excellent for nourishing infants!

We’ve been busy with sick calves! We lost some calves last year due to many of them contracting crypto. There’s no cure as such, it’s a case of treating them, keeping them redydrated and crossing our fingers. We’ve been dosing every calf with halocur for 7 days from birth, ensuring that they got 3 litres of colostrum within hours of birth, disinfecting and keeping everything as dry and clean as we can.

I was on high alert when feeding calves – if a calf was slightly off, it was double checked. Sometimes they were just having a shy moment when coming to the feeder but I was double checking that they weren’t off their feed in any way. We were just starting to feel we were in the clear.

Then two weeks ago, a couple of the oldest calves developed a scour and wouldn’t drink. Was it the dreaded crypto? We took precautions as it spread to the adjoining pen (there were 29 calves in the 3 large pens in the haybarn). I was feeding them last, using buckets just for them, using disinfectant and lime. It spread to the third pen. We had brought samples into the vet lab and were awaiting results. To our relief, even if they were off their milk feed for one or two feeds, they were taking water and we were adding replenalyte to it so they weren’t getting dehydrated. They seemed to be recovering after 24 hours. Then a couple got sick again. Was it recurring?

It spread to all the other sheds. It seemed that each shed had a different one or two calves sick at every feed. Feeding them was taking ages as if they felt a bit off, they either weren’t drinking or were very hesitant to do so. They may come and stand at the feeder but they couldn’t be bothered feeding or if they attempted to and a stronger calf brushed against them, they just couldn’t be bothered to latch onto the teat again. Even if they started off feeding, there was no guarantee they were getting a full feed. Feeding them was taking double the length of time as I couldn’t just throw the milk into a feeder, check they were all on it and go and feed another batch. I was offering some milk by bottle to see if they would take it. Just like a young sick child might seek a bottle or the breast more where they were accustomed to drinking from a cup, the calves were regressing. But they were recovering quickly. We still hadn’t got the results from the vet lab – wouldn’t you think they would have got them to us before the Easter long weekend but no, it took 11 days to get the results. It’s just as well they weren’t dying! The results said it was rotavirus which we are taking with a pinch of salt to be honest as all were vaccinated with Rotavec Corona.

It had spread into the shed with the youngest calves in the old parlour by then and working its way through them. We were isolating newborns by then and while I was feeding all the other calves, Brian was looking after the newborns and I wasn’t going near them. The youngest twins though, a week old, caught it and didn’t seem to be recovering. Then last Monday morning, both drank well and I thought we were on the road to recovery. That evening it was a different story with one calf very sick and the other not great. The bull calf tried to feed on the Tuesday morning but gave up, he wouldn’t take milk from the bottle but did take two litres of electrolyte over four hours. We called the vet out and he gave them both an IV as well as injections. Such a transformation – the next morning they were both bawling for milk. I fed them both 2 litres and we left them on the drip for the rest of the day. They have been jumping around the pen since.

Touch wood – we’re at the end of it now. Calves in all four sheds are fine now and I hope it doesn’t affect the eight newborns in the isolation unit – we’re keeping them there for the time being!

By the way, according to Rural Life of 1850, a pint of port wine can work wonders on a calf with scour! I didn’t try it.

This is one of our oldest cows, she was born in 2003 which was the first calving season we were farming. She gave birth to her sixth set of twins this week and is going into her eleventh lactation. 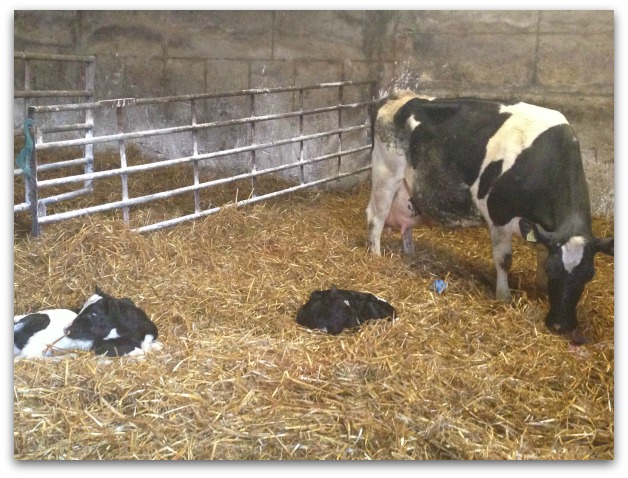 She’s in good condition so there’s no reason she won’t last for another couple of years at least. Twins can be hard on a cow but all three cows carrying twins were on a straw bed for months. She must have thought she would never get out of the maternity unit! She has had two sets of dairy heifers and four sets of mixed now. All three sets of twins this year have been mixed which means the heifers will be infertile due to the testosterone in the womb from the male.

The children are back to school tomorrow after a lovely Easter break, the fact the weather was so nice all last week made a huge difference. They had a swimming lesson each morning at 11 and I was seriously wondering how on earth I had time when they were younger to bring them to toddler groups, beavers, cubs, swimming, badminton etc. Even though I did various messages while they were having their lessons, it meant having to drive to town every day and I’m not so used to that now. Mind you, this week will involve driving too – I’m doing a talk on ‘Building Your Brand with Social Media’ tomorrow in Portlaoise, training in Carlow on Tuesday and have meetings on Thursday. 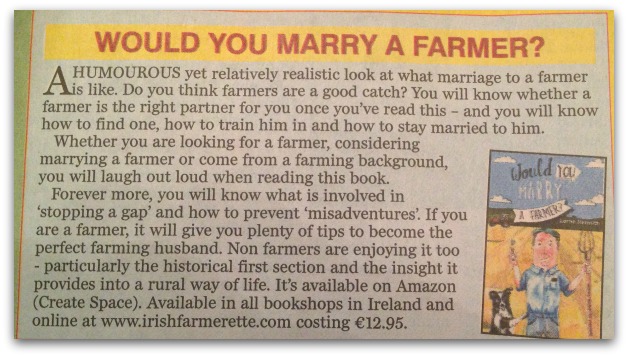 Oh, and I was delighted to have my book mentioned in Ireland’s Own magazine and I was interviewed on a UK radio station for the first time – the podcast is here if you’d like to listen to it. I’m delighted to say they loved my book and have published an extract on their blog too.

The kids are back to school tomorrow – I hope you have a good week too. Lorna

2 thoughts on “The Future of Milk, Sick Calves, Interesting Research From The Past and an 11th Lactation Cow”