So much for me waffling about positivity in my last post and there’s so many farmers in crisis at the moment. The news are full of stories of farmers in the UK and Ireland (with Antrim being hit worst in Ireland) suffering huge losses of sheep and lambs. Many farmers choose for their lambs to be born at this time of the year so the weather is mild enough (usually) for them to lamb outdoors, hence they don’t have the housing for them. Unexpected and large snowdrifts means that sheep are dying in the snow. 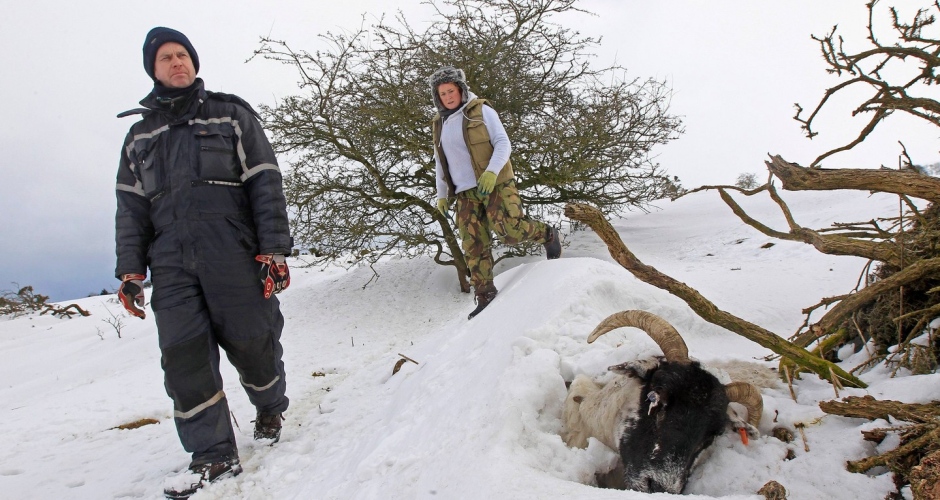 Financial loss is one thing but witnessing death on such a scale is extremely upsetting. I saw a tweet earlier about one UK farm experiencing the loss of 700 sheep. Supermarkets are advertising half price lamb for Easter at the moment too and it makes me wonder are the farmers having to take half price on their prices or are the supermarkets using it a loss leader? It doesn’t leave a nice taste somehow.

These harsh conditions this late in the winter, while unusual, isn’t setting a precedent. ?My father was reminiscing yesterday about the 6 weeks of snow they received around this time of the year back in 1947, he was 9 years of age and had 6 weeks off school. It was also late in the winter and followed an extremely wet summer from the year before.

I also remember my sister’s birthday party on 24th April, back around 1978, it started snowing on 23rd April and everywhere was completely white on 24th.

Things are harsh at the moment though as snow or no snow, there’s no grass growth, animals have had to be rehoused and many farmers have little or no silage left. What is for sale isn’t necessarily great quality either following the poor harvest last summer. For farmers who have bank managers breathing down their necks, having to fork out for more fodder, the pressure is on. Teagasc has texted farmers telling them to contact them if they are short of fodder. I’m not sure what they can do but it is good that farmers in crisis get an invitation to get in contact if they need to. It can be hard to feel positive when one is facing debt, hungry cattle and dead sheep and cattle! Apparently many cows are doing ‘down’ pre and post calving and don’t recover. The number of deaths (animals going to knackery) had increased by 20% in January and February apparently and with the recent weather being so severe, I dread to think what the percentage increase will be for March. We have been lucky – we’ve only lost 2 calves this year which were at birth. We lost 3 calves last year with Rotavirus and while a few calves are a little poorly on and off this year, all are reasonably healthy. My heart goes out to each and every one that is badly affected this spring. Reports of suicide amongst farmers were too high last summer, we don’t want to be hearing of them this spring.