We had a lovely Christmas, really relaxing – did nothing but cook, eat, drink, be merry and play and read books of course! ?I had intended doing a blog post on the best book I read in 2011 and then I couldn’t work out or remember which was the best so I’ve decided to review a couple of my most recent reads.

I’ve been reading Harry Potter to the kids since August and we all love it, we are now almost mid-way through book 6 and I can really understand why people queued at midnight for the new editions. I’m not going to review them, just to say we have thoroughly enjoyed them although the bits that Brian hears, he thinks they are very drawn out and longwinded whereas we are eagerly soaking up every single word.

I loved the Steig Larsson books and have read a couple of the Jo Nesbo series and read The Devil’s Star over the Christmas. While I found the Snowman a tad brutal, I enjoyed this one – Harry Hole is one of those main characters that you grow to love. His disasterous relationships with women, his alcoholism, his rudeness, his desire to lock up the bad guys, his disregard for his personal life – yes, there’s plenty of other literary detectives out there of a similar ilke. ?Devil’s Star is one of a series of 6 and I’ve now got them all apart from Redbreast which is supposed to be the best!

Nesbo does keep the reader guessing right to the end and if you enjoyed Stieg Larsson, you’ll enjoy these. I went to see the new film ‘The girl with the dragon tattoo’ and it is excellent. Daniel Craig is top notch and while it certainly has its share of brutality, it is so watchable. Brian hasn’t read the books and he thoroughly enjoyed them too.

If you like crime, you’ll love these. Mind you, the electricity went off around 4am the other night, (we discovered afterwards that the wind had brought down a tree which knocked against our transformer). Will woke up and was alarmed at it being so dark and when I went to reassure him, I was blearyeyed coming back out onto the landing and sure I saw a shadowy figure in front of me, I sort of yelped/screamed which woke up Brian and Kate! I then stuck my hand out and the shadow disappeared which made me think of Nearly Headless Nick at Hogwarts! 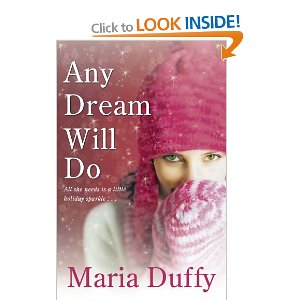 I won a copy of ‘Any Dream Will Do’ by new Irish author Maria Duffy in the Farmers Journal and was intrigued by the plot whereby a single 30 year old Dublin woman invites her 3 never-met-before twitter friends to her flat for a weekend. I suspected that each of them had presented a certain persona through their twitter profiles and each of them would be quite different in reality and yes, this was indeed the case. ?The main character, Jenny Breslin, is revealed in the first person and we learn of all her insecurities and worries about being seen as boring by her work colleagues, friends, possible boyfriends and now her new friends on twitter.

If you are looking for a light chick lit read, this is perfect. I read it in less than 3 hours and it doesn’t require any work trying to work out who is who. The only thing that irritated me was the inaccuracies with how the tweets were laid out on the page. If someone sends me a tweet, it will start with @Irishfarmerette and the tweet follows whereas in this, it was written as though the tweeter’s tweet started with their own username, ie @irishfarmerette and then the tweet. ?I’m not sure if this was an error by the author or by the publishers but it annoyed me. I know it was probably done like this to make it clear as to who was tweeting but as we tweeters know, it’s not how it is done in practice.

It is published by Hachette Ireland and can be purchased here or if anyone would like to borrow my copy, you are very welcome to it. Incidentally, the Irish Country Living is looking for people to volunteer to do an occasional book review for them. You simply email Ciara (cokelly[at]farmersjournal.ie) and when it is your month, she will send you a book to review.

One thought on “Reviews”