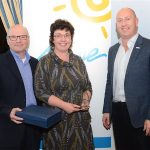 25th October 2016 was  a big day for book awards. There was the Man Booker award announcement, the Bord Gais Energy Irish Book Awards shortlists were announced and the Carousel Aware Prizes for Irish Indie books award night was held in Dublin. Guess which one I was at?!

Carolann Copland was the brainchild behind Writing CAP, determined to bring recognition to the quality of independently published books and she also thought it would be great if the charity [...]