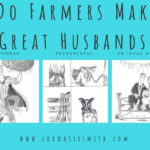 When I started writing my first book Would You Marry a Farmer? I was genuinely surprised at the number of single women who told me they really wanted to marry a farmer. Part of the reason for my surprise was because farmers definitely weren’t seen as a good catch in the 1950s when draughty farmhouses, lack of electricity and piped water, living with your mother-in-law and hard work were the norm for many. However, in the twenty-first century, farmers are [...]