Are you wondering if I had disappeared off into an abyss? I don’t think I’ve visited this blog at all for the last month, I’ve lots to post about but just didn’t have the time – just as well I was organising rather than trying to do well in Blog Awards Ireland?and there you can read our post on how the ‘power of we’ managed to create an event on Saturday night that turned out to be a great success. 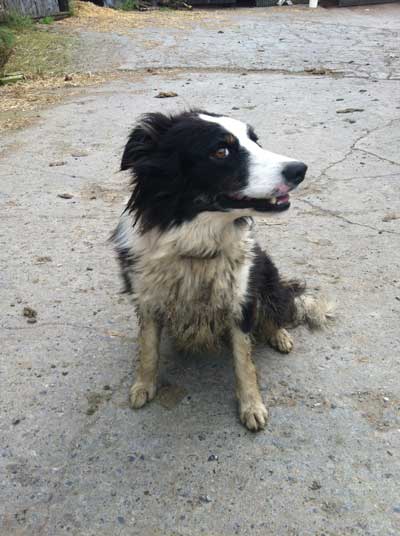 Blog Action Day’s topic this year is the ‘power of we’ and rather than rewrite the blog post above, I’ve decided to focus on the power and teamwork of a farmer with his dog. As a child, I always loved watching the programme ‘One man and his dog’, marvelling at the skill of both dog and farmer as they seemed to communicate so easily. ?We had a wonderful cattledog when I was very small and he was killed on the road when I was 4. ?Apparently he used to lie under my pram in the garden and no one but my parents or the workman could go near that pram while I was in it. All my dad had to do was tell him to go for the cows and he’d be off. ?He was loved like a child and I heard many stories of ‘Pupsy’s’ skills when I was a child.

We never had a decent cattle dog again, my father claimed that each dog was spoilt by we children but I suspect it had more to do with his impatience. We did buy a trained cattle dog once but he was killed by the tractor – something else I wonder at on farms – they are dangerous places for dogs and children and so many people leave their dogs loose all day. ?I was totally amazed when we moved back from the UK to a housing estate in Carlow – the number of dogs roaming the estate during the day was astounding.

Brian was always reticent to get a cattle dog, the timing never seemed to be right. Then, in 2008, our neighbours dog had an unplanned pregnancy and we agreed to take one of the pups. ?He travelled everywhere on the farm with Brian, falling asleep at his feet on the tractor, sitting impatiently at the back door when Brian was in for his dinner and hero worshipping him. ?Watching them work the cattle was something like poetry in motion and other times it didn’t work so well and insults would be hurled across the field at the dog who was doing his best to understand.

It is true what they say that every dog only has one master. While Sam will obey me for standard work such as bringing in the cows, we just can’t communicate effectively for trickier work. ?He is 4 years old now, the mad puppy stage is well and truly gone, he was castrated last year as he suddenly started to roam, he is much more sensible and settled. He even finds bringing in the cows a bit boring and will lie down for a rest and then go after them again. ?He loves working the bulls as he knows they can be dangerous and he sees it as a challenge. Indeed, it would be impossible to work the bulls without him.

A good dog is worth more than his weight in gold. ?Many’s the time I ran up and down fields trying to round up cattle when moving them – a dog can do it so much more efficiently!

Do read this fabulous post about one man and his beloved dog that won the ‘best blog post’ in Blog Awards Ireland. Word of warning – it will make you cry. ?I often wonder why it is that one’s dog cannot live a longer life as they really are man’s best friend. ?A working dog offers not just much needed help, also companionship, conversation and unconditional love.