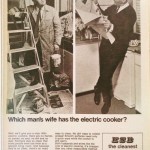 Well, my week didn’t include as much farming as usual! In fact, it contained a lot of socialising. Last Wednesday evening, I headed to the Big Smoke for the launch of the Modern Wife Modern Life exhibition. Curated by Ciara Meehan, it is being hosted in the National Print Museum until the end of August. It’s well worth a visit and it is free. Ciara is researching how the magazines in the 1960s reflects life for Irish women then as well as investigating how women themselves responded to the magazine content. 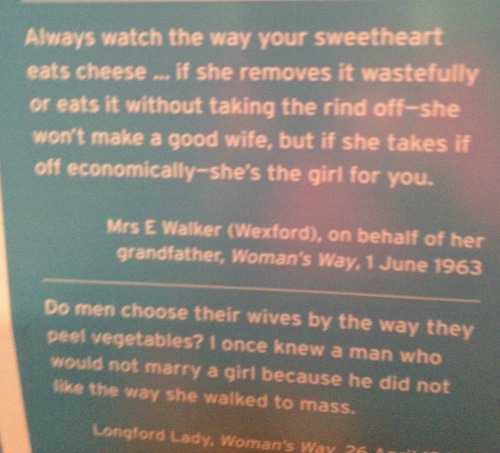 How to work out if she will be a good wife! 1960s Ireland

At first glance, it’s easy to presume that the magazines follow the status quo of the time but that’s not necessarily the case. Sex and returning to work were discussed. The exhibition shows many extracts and magazines from magazines as well as letters offering employment (which included confirmation of termination once she gets married). 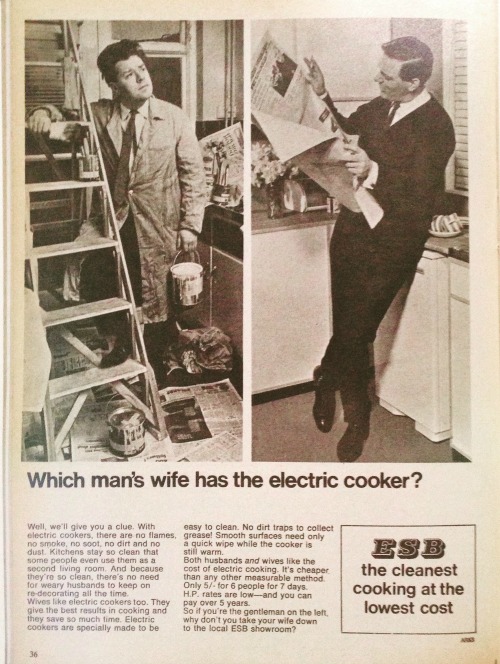 Interestingly, as Ciara points out, many of the ads are for aspirational products such as dishwashers and electric cookers. Remember that while urban women had piped water at this time, less than half of rural homes had running water and the ICA was allegedly behind a rumour stating that no woman would marry a farmer unless there was piped water in the house. When you think that many women were still carrying in buckets of water and handwashing clothes, a dishwasher must have seemed very modern indeed. I particularly liked this sewing machine too, still in its original case. 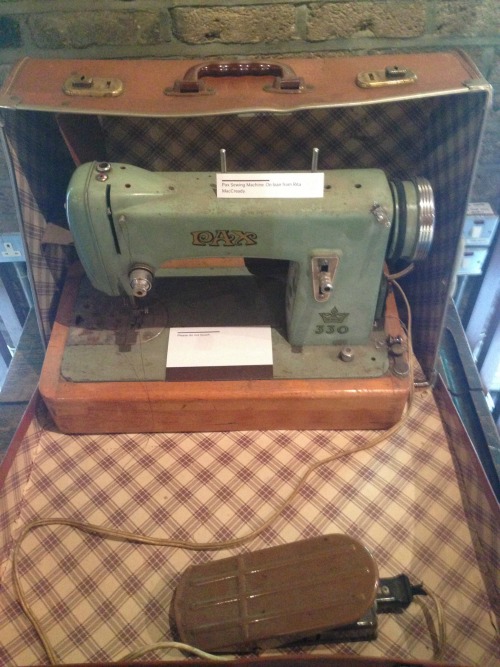 My mum bought hers secondhand in 1958, a Singer, and it was electric. She used to buy fabric on a payday ( Thursday) ?to make a new dress for going out on the following Friday night.

Do make your way to the National Print Museum during the summer to see the exhibition. It’s well worth it and the cafe there is supposed to be excellent too. 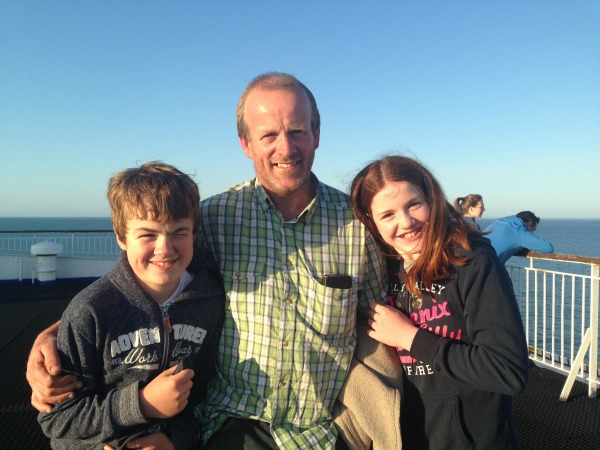 We also headed over to the UK for a long weekend. It can be hard to get away during the summer, we do have a reliable relief milker and my dad is around to herd but there always seems to be something that crops up. Will has been a fan of Formula One since he was six and Brian put the TV on for him one Sunday afternoon saying to him ‘you might enjoy watching this’. That was it, he won’t move from the armchair while watching and will gnaw his nails down to the quick if it is tense. He’s a huge Lewis Hamilton fan too. Brian has promised to bring him to Silverstone sometime so becoming a teenager seemed like good timing. The plan was to go for all three days, we were staying with friends in Hungerford. Kate and I went on the Friday too as well as calling into a fabulous bookshop in Brackley with two rooms of second hand books. We headed to Oxford on Saturday for a girly day and met up with a friend. 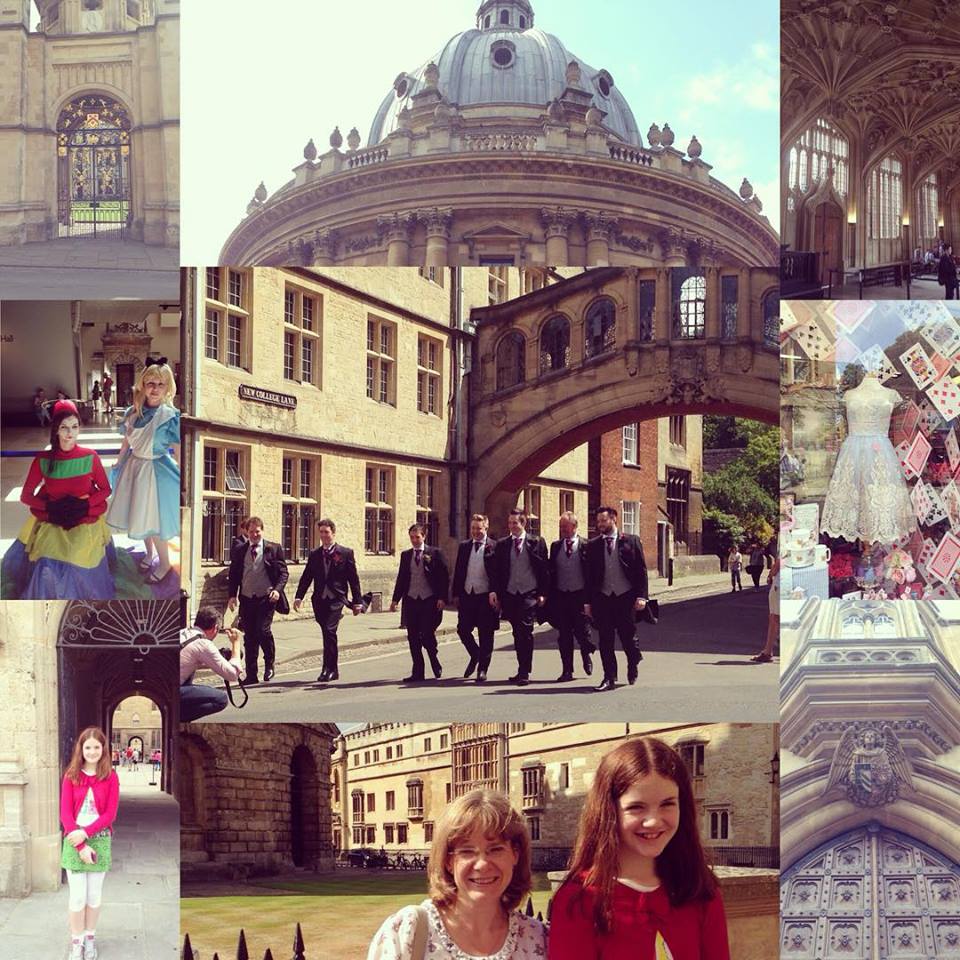 Our day in Oxford

Between seeing the Bodleian library and some of the places where Harry Potter was filmed, it being Alice’s Day (150 years since Alice in Wonderland was published) , popping into bookshops, buying Harry Potter paraphernalia and generally soaking up the atmosphere, it really was a lovely day and she loved it. We even spotted a groom with his six groomsmen walking under the Bridge of Sighs – had to get a wedding in there somewhere! There were a lot of weddings on and we couldn’t get entrance to some colleges / Harry Potter sets as they were closed for private weddings. 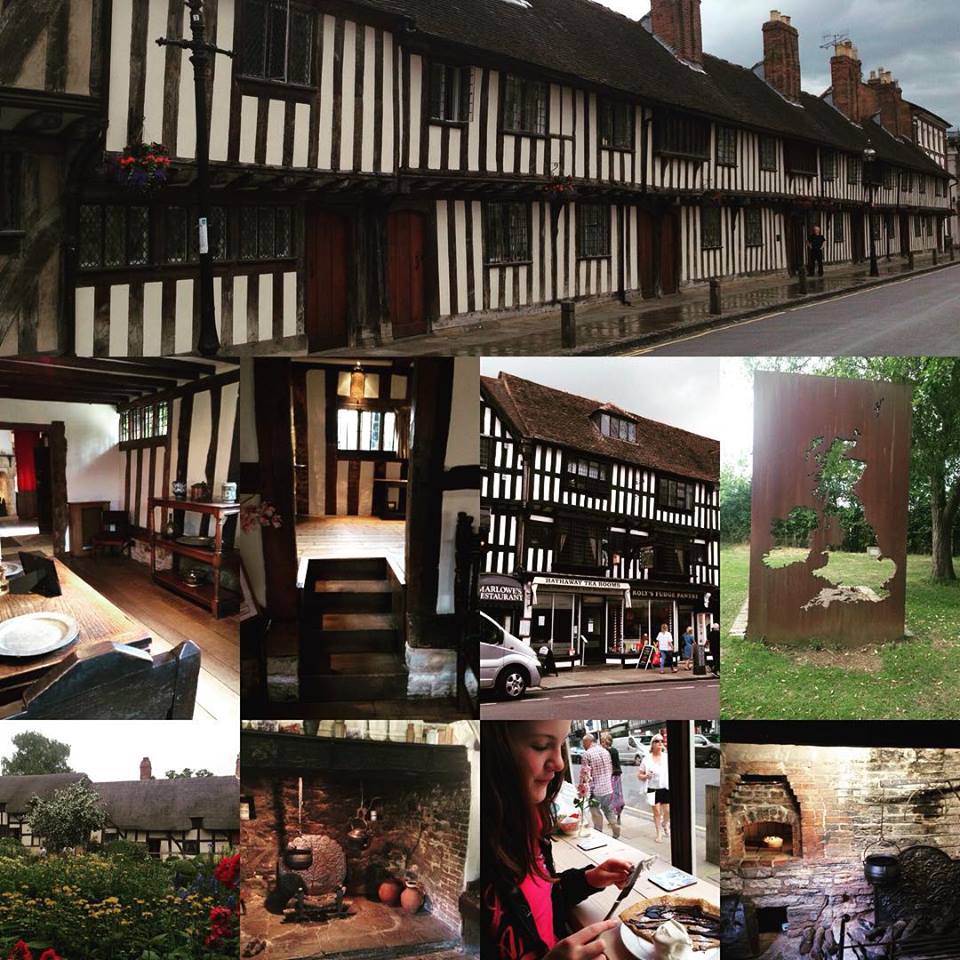 We went to Stratford the following day while the boys went to the F1 (Hamilton won thank goodness) and between looking at second hand bookshops, new bookshops, having a nice lunch, looking around some Tudor houses, visiting Anne Hathaway’s cottage and buying clothes, we had a lovely day. Then it was a drive back to the boat, stopped in Chepstow for a nice Italian meal, and onto Fishguard. Home on Monday morning to find the cows hadn’t missed us a bit and no fairies had come to clean the house either! It’s quite ironic that writing a book about perfect farm wives means my own house is starting to fall down around my ears. I’m supposed to be planning a new kitchen and haven’t even had time to check out Pinterest for inspiration yet.

One thing that amused me were the number of Mercedes, Jags, Ferraris, Porsches, Aston Martins, Bentleys and other ones that I can’t spell that the kids spotted on the road. It got to the stage that we decided that kids over there must get excited when they see a tractor as we only spotted one of those!