This post is a ‘tagging post’ amongst writers – a little bit of fun, gives readers a chance to get to know more writers and it’s interesting to see authors share the ‘Why, What and How’ they write. ?I was tagged by Pat Fitzpatrick, author of ‘Keep Away From Those Ferraris’, which I reviewed here some weeks ago.

What Am I Working On?

I’m supposed to be writing my second book but between writing lessons for We Teach Social, training with Write on Track and feeding calves morning and evening, I haven’t made much headway. ?I am re-starting on April 1st with an intention to write the first draft in three months. I read Stephen King’s On Writing last year and on reading this blog post which summarises some of the best points of the book, it was good to see that he recommends a first draft should be written in no longer than three months so that is my aim! ?I know I should be striving to have it out for the Ploughing Championships in September but mmmm. I’ll let you know how it is going by the end of May. I write best when under a tight deadline and as I am self publishing, I need to self inflict a tight deadline.

It will be non fiction again (planning a novel for next year). While reading a few farming books last year, I enjoyed those that recounted their stories and adventures of farming so this book will be a type of memoir for want of a better description – some of my childhood memories of farming, stories I have heard and tales of our own farming adventures – all told with some humour hopefully.

How Does It Differ From Others In The Genre? 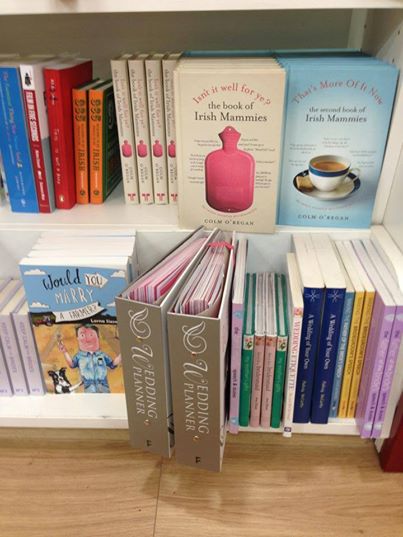 I guess ‘Would You Marry A Farmer?‘ is best placed in Humour, or indeed,Humour -> rural life or humour -> love, sex and marriage! I was delighted that Easons in Carlow are now stocking my book (and they have had people inquiring for it) – it is filed under Irish Interest and Humour – in the good company of Colm O’Regan’s Irish Mammies books.

I suppose it is best described as a ‘tongue-in-cheek’ description of life married to a farmer and farming in general. ?Like many other humour, it does provide a realistic view of life, all with a liberal pinch of salt. I suppose the subject matter is what makes it somewhat different in that it looks at marriage and farming whereas most in either humour genre concentrate on either marriage or farming.

Why Do I Write What I Do?

I have toyed with the idea of writing a book for some time and started a novel a few years ago. I may return to it next year. I do agree with the saying ‘write what you know’ and as my book was inspired by the popularity of one of my blog posts, it showed me that there was an interest in this topic and indeeed, in the way I write it too.

It has been wonderful to see the positive response to my first book as farmers and farmers’ wives see their own experiences lives echoed in the pages and how they tell me that they have never laughed as much. Farming can be tough but if we can see the humour in some moments, it makes for a good life.

How Does My Writing Process Work?

I’m an owl, not a lark. ?I admire people who say they get up at 6am to write in the quiet of the house. ?I write much more effectively at 11pm! ?I would love to be able to write late into the night if the muse strikes me, safe in the knowledge that I could sleep on the next morning but kids need to be sorted for school and calves to fed so the latest I can manage is about midnight.

If writing seems overwhelming, which can sometimes happen, I pretend I am writing a blog post so it seems a manageable block of 500-2000 words and then the fingers tap away. ?Writing late at night also means that I am subconsciously and consciously mulling over content in my mind during the day and jotting down notes so that writers block isn’t too much of an issue once I get started.

When editing, I have to print it out and then take the red pen to it. I do edit a little bit on the laptop but to assess it properly, I need to see it on paper and then rejig sections around and cut out extra words as my sentences can be quite longwinded sometimes. ?Once it is covered with red ink, I take to chopping it on the laptop and then print it out again! I then pass it to my long suffering husband. By this stage, I can’t see any humour in it at all so when he smiles or chuckles, I’m demanding to know the exact bits he finds funny.

As part of this tagging game, I then nominate (arm twist) three other writing bloggers to answer these questions and they will publish their post on 7th April and nominate another three each.

MT McGuire blogs here and her trilogy has now become a four part and will be out within the next month or so.

M T McGuire enjoys the real world but wouldn’t want to live here full time. That’s why she writes books. She grew up, or at least, got bigger, half way up a windy down in Sussex. Her home was also the first location choice for Hogwarts, in the Harry Potter films, so maybe it’s not so strange that she’s ended up writing spec-fic. Perhaps there’s something in the water up there, apart from chalk. She now lives in Bury St Edmunds, in Suffolk, with a McOther, a McMini and a selection of very silly cars. She hasn’t found a way to make any of the cars fly, and none of them are fitted with ordinance, but she and her team of evil scientists are working on that.

Despite being 45 now, and supposedly, an adult, M T checks all unfamiliar wardrobes for a gateway to Narnia. She hasn’t found one so far but she lives in hope. 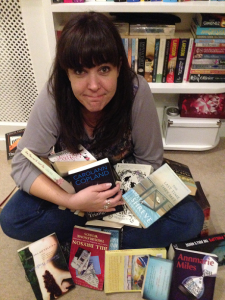 She is currently working on 3 novels, all in various quantum states of editing and, for now,?submissions limited to competitions;?a couple of?feature length screenplay treatments, and usually, at least three or four?short scripts. It?s a lot of work, but it keeps her out of trouble. More or less. 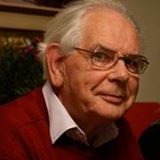 In his mid-seventies PJ Connolly published his debut novel The Priest?s Wife, set in?Catholic Ireland in an era when the Church?s influence was all pervasive. As a young man?he studied for the priesthood but abandoned that path before it was too late.?He devoted his working life to counselling teenage girls in a convent secondary school.?Which might go some of the way towards explaining his surprising attempt to penetrate?and portray the female mind in his depiction of Susan the former nun.

As it happens, I reviewed The Priest’s Wife a few weeks ago, I really enjoyed it. And you will find PJ’s blog here too.

Visit their blogs next Monday to read about their writing processes and find the nine writers that they unleash on the world. Many thanks again to Pat for inviting me to take part.?