I went to the National Women’s Enterprise Day in Portlaoise the week before last. It was a busy week for conferences with the Women in Agriculture one on in Killarney and the Web Summit on in Dublin. At ?700 a ticket for the web summit, it was well out of my league!

I delivered a short talk on blogging at last year’s NWED conference and I was looking forward to the social media session again which proved very informative. I missed out on the networking session (speed networking) which was a pity from a business point of view. I was teaching social media to a Start your own business group in Wicklow. 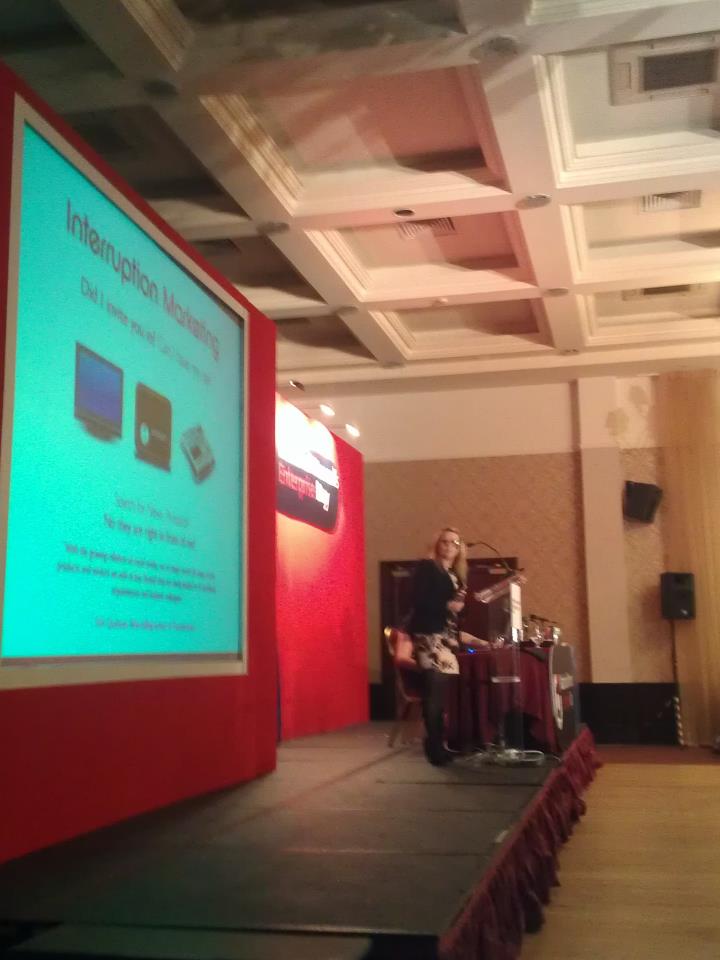 Back on the Thursday then for more. ?It’s a great way to meet people although I have to admit, I also enjoy it as a way to meet up with people I don’t see as much of as I would like! ?4 women presented on Thursday morning, sharing their stories of how they managed to get where they did, often not taking a straight ‘expected’ route at all, taking jobs that they hadn’t planned on and how those led to other opportunities. One theme of the day seemed to be that Emotional Intelligence is so important, much more important than IQ.

Another recurring theme was ?that women are every so slightly damned! Damned if they act like men in the workplace and damned if they are the primary carers in the home and assume that role. One speaker made the point that if you ask a man about his children, he will be delighted to talk about them before getting down to business but that tends to be more unexpected than happening as a matter of course. Men won’t necessarily ask other men about their families.

The question was asked of the audience ‘Raise your hands if you do 90% or more of the childcare’. I raised my hand as high as it would go! I have to admit though that is because Brian works all hours under the sun, plus I’m my own worst enemy – as Brian was going to the parent-teacher meeting this year, I needn’t have gone as both kids are doing great but I insisted on going as well, after all, he might miss some nuance from the teacher!

I was a little bit perturbed by one thing though. When one of the speakers admitted that she had accepted a job weeks before expecting her second child and returned to work a week after the child was born, a gasp of admiration rather than shock seemed to go around the room. Together with statements that women on maternity leave should be kept in the loop regarding what is going on in the company, I was left wondering if we’ve actually got back in time rather than forward. Surely we should be negotiating for fathers to have paternity leave rather than women being happy to forego some maternity leave. ?I’m not sure if anyone would have got any sense out of me if they phoned me on a business-related matter in the first 6 weeks after birth but that’s not the point. ?In some Eastern countries, the extended family looks after the older children for 40 days, leaving the mother to bond with the baby. ?It’s not necessarily the mother I’m so worried about either – surely a baby needs that primary care giver there for the first weeks and months of life. ?I get so cross when I see articles in the Farmers Journal every spring about the importance of colostrum for calves yet there is such little emphasis on the importance of breast milk for babies – not just for the actual milk but that closeness and skin contact. ?People are shocked when dairy calves are removed from their mothers shortly after birth yet women returning to work after a week is deemed to be okay! ?Personally I think we should be campaigning for more paternity leave rather than feeling that women are left out of the loop and disadvantaged in work because of ‘having’ to take maternity leave. Maybe I was reading too much into it all (it’s the kind of stuff that is like a red rag to a bull with me) ?- I’d be interested to hear what others think.

While I don’t have a problem at all with women staying in touch with work while on maternity leave, and let’s face it, most self employed women have to, to some degree, I do have a problem if it becomes the norm and women feel they have to do so, in order to stay ahead. To be honest, that is probably happening anyway but it doesn’t make it right.

Maureen Gaffney gave an excellent presentation, her main point being that we need so many positives in our day to counter any negatives, for example, for an average day, we actually need 5 positives to every single negative we encounter. Her whole presentation was positive though (compared to quite a negative one I’d heard before – similar material but delivered in a different way) emphasising how much we are in control of our own destinies by making efforts to be positive. ?It shows the importance of being positive in the family home and the workplace too. Apparently humourous people are amongst the most important in any workplace – now isn’t that food for thought!

All in all, an excellent conference and I hope it will be nearby again next year.

Speaking of food, off to Savour Kilkenny tomorrow and looking forward to seeing Mona and Ron of Wise Words doing a demonstration. Coderdojo and a hallow’een party tomorrow too! Hope you all have a great Hallow’een too.