I was intrigued by the title of this book when asked to be part of the book review panel for Sean O’Rourke’s programme on Radio One. American Housewife – was it going to be a parody or a serious take on the housewife of today or perhaps of times gone by? 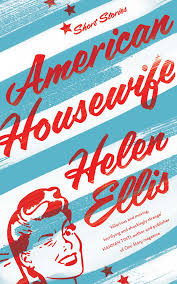 American Housewife consists of 12 short stories of varying length. It opens with “What I Do All Day” which was apparently inspired by the responses to her own tweets and Ellis’s observations of other tweets. My favourite lines are “I hope in the shower and assure myself that behind every good woman is a little back fat” and “I see everyone out and face the cold hard truth that no one will ever load my dishwasher right.” Hilarious. Ellis had her first book published over a decade ago, she then wrote three novels, none of which achieved publication and from then on, she described herself as a housewife rather than having to admit that her writing wasn’t achieving literary success. She found it was quite convenient as people didn’t ask much more after that. I thought it was interesting too though as perhaps the occupation of housewife is becoming more respected in the US, just as farmers’ wives see themselves as an important part of the farm business with their roles as provider of meals, standers in gaps and gophers.

My favourite short story was “The Wainscoting War” which involves an email correspondance between two ladies in an apartment block. Most of the emails centre around the decor of their shared communal area. The content becomes angrier and more abusive as time goes on with many comments going way below the belt. Apart from being interesting from the point of view of do we write messages that we might never say to a person’s face, it also made me realise that I wouldn’t be at all suited to apartment living either – it’s just as well I live in blissful solitude on a farm!

The last short story in this collection, “My novel is brought to you by the good people at tampax” made me glad I’m an indie author! As with all her stories, you hope they are wildly exaggerated. This describes an author having to produce her book within a specified length of time. The publishers and sponsors control her life to the extent that her husband is removed from her life and she has neighbours delivering food to her (the latter sounds good). Her concerns about the quality of her writing are brushed aside, she has to include specific content, reviews aren’t forthcoming yet the book sells well because Tampax promotes it everywhere. Her life only promises to return to normal when sales reach a certain level and then she dreads them commissioning a sequel. Plenty of food for thought there.

She does go close to the wire and yes, a couple of the stories did shock me and made me feel somewhat uncomfortable, particularly the one on young beauty queens!

I learnt much from Ellis too – no, not how to murder someone but I thought it was interesting how she used Twitter to provide feedback on her work. I know I’ve used blog posts for feedback and yes, shortening ideas to less than 140 characters is a challenge.  I liked this line too “Twitter gives me instant feedback if what I write doesn’t work. It’s the ultimate editor: if it’s not retweeted, it’s deleted.”

Many of her short stories in American Housewife were published first in literary journals and then she published with Doubleday. As writing short stories is on my to-do list (and I have a couple of first drafts completed), it certainly seems that sending short stories to journals or competitions is a clever marketing tactic and it’s one that I’m going to try. 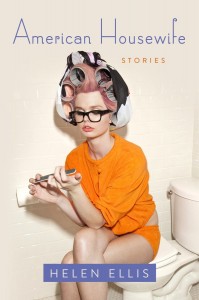 The book covers are interesting too. The top one is the UK cover and yes, the colours, the 50s icon, the stars, the Eddie Rocket diner look, all serve to emphasise the American nature of the book. I prefer the US cover though, how this 1950s housewife is sassy in her orange underwear and huge curlers.

If you’d like to listen to our book panel (it’s about 15 minutes), here’s the link to the podcast. I do think this book is like Marmite though, people will either love or hate it. Me, I loved it.

Interestingly, as an aside, Ellis is also a shrewd and successful poker player. I wonder will poker players feature in her next collection? Looking forward to it already.

Have you read it yet? What did you think of it?