I’m not sure if this reveals that I am dopey, conscientious or just plain tired – maybe a mixture of all three. It’s been a busy time on the farm. While normally the cows would be getting all their feed from grass in the fields during the summer (unless it’s very wet which happens more often than we would like), this heatwave and lack of rain means we’re having to spend time (and money) providing them with soya hulls and silage. It’s surprising how much time it takes up but has to be done. We knew on Saturday morning that we would be working late but were determined to get 80 calves dosed and moved to the outfarm to graze what was left of second cut ‘silage’ in half a field. 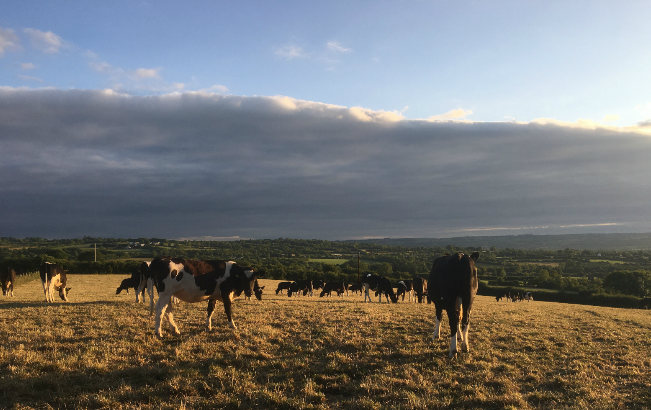 Dark clouds but no rain. The silver lining is the number of beautiful evenings we are getting at the moment but at the back of our minds is the knowledge that once the weather breaks, it might not stop raining for months. A feast or a famine this year!

This is a record breaking summer in terms of weeks without rain and high temperatures. Many are comparing it to the heatwave of 1976. My memories of 1976 are of watching the cattle roam around the Banks Field which was yellow, bare and cracked. Once the silage was cut in the adjoining field,the gate was opened and the cattle didn’t need to be told twice to run in and start grazing the tall green grass left in the headlands. This year, we had a fairly normal couple of weeks in May after an extraordinarily long winter. Our only concern for the summer was wondering if we’d be able to make enough silage in case of another long winter as all of our reserves were eaten. We never dreamt we’d be feeding cows silage in June and July. People are announcing on Twitter when rain is falling on their farm such is the scarcity of it. Rainfall is almost becoming breaking news in parts of Ireland and the UK – it’s just incredible. It’s taken forty years for a summer to be as hot and as dry but I think we’ll be describing 2018 to our grandchildren as the year of two extremes.

Back to Saturday: we were fairly efficient. As Will and I injected and bolused each lot of 20 calves in the crush, they were loaded into the trailer and Brian brought them to the outfarm while we did the next lot. Good old family farming with all hands on deck.

We ate late and Brian went to milk while I gave milk to the seven youngest calves that are still housed and meal to the 55 youngest in a nearby field. The heifers were in the adjoining field. I had to check them too as a few have been on heat (they lost embryos due to the hot temperatures, the first 50 days of pregnancy in a cow can be very touch and go if there are stresses)eat. If any proved to be on heat e, even though we have a young Friesian bull with them, I would to bring her in to another bull to be sure (to be sure to be sure). We have a couple of 16 months old bulls indoors. They weren’t ready to go to the factory with the others and now they are getting a bit of extra exercise!

It was 9pm when I was giving meal to the calves and had just about finished when I noticed one was quite a bit taller than the others. Yes, one of the heifers had jumped the fence. Judging by the paint streaks on her, she was on heat. She was tucking into the calf nuts like they were the tastiest food she’d eaten in months. As the heifers are just on yellow grass at the moment, overeating could make her bloat and die so I had to get her out of there. I called Will to give me a hand and with Lou’s help we almost had her out on her own when she bolted back into the field. She was flighty  and it wasn’t going to be easy. We tried again but to no avail. I scooped what was left of the nuts back into the bags and decided to let her calm down while I finished the other jobs.

Half an hour later, she was still flighty. I decided I’d have to get her in with all the calves and then separate her from the batch. As it worked out, we got her out with just a couple of calves so it was easy enough to send them back to the field. In she went to the bulls and I wished her a pleasant evening. All was well and I headed indoors for some supper before bed.

At 4:15am I shot up in bed. ‘I never shut the inner gate,’ I said. Brian mumbled something. I jumped out of bed to run to the loo. I couldn’t believe it. After all my work removing her from the calves meal in case she got bloat, I had put her in a shed with lots of the stuff as the bulls are on adlib meal (this means it is there for them all the time). If she ate too much, she could already be bloated. I’d no idea how long it would take or how close she might be to death. I should have shut across an inner gate to stop all of them getting to the food for the night but had stupidly forgotten.

Should I wake Brian or not? If I went out and she was bloated, I’d have to get his help to get her out anyway. For some reason, an image of Brian waking up at 6am and finding me gone, and then discovering me dead and bloody from being battered by the bulls flashed into my mind. I’m not sure why as they aren’t dangerous as yet although I still wouldn’t be complacent around them. 4:15am is obviously the time of the morning to be dramatic. I could have gone out and checked her and then come back in for help if necessary but I think I knew I’d be so devastated if I found her lying on her side with a huge stomach that I’d need emotional support. So yes, I woke him. Poor guy. He didn’t complain though. He also knew I’d be inconsolable if I found her in a bad state.

It was quite a nice morning as we walked up the yard. It was getting light and the trees were full of chirping birds. The bulls and heifer were lying in the inner part of the shed so we had to go in to check her. Thankfully, all was fine. She looked like she was full but not overly so. We fastened the inner gate so they couldn’t get to the food any longer and that was it. 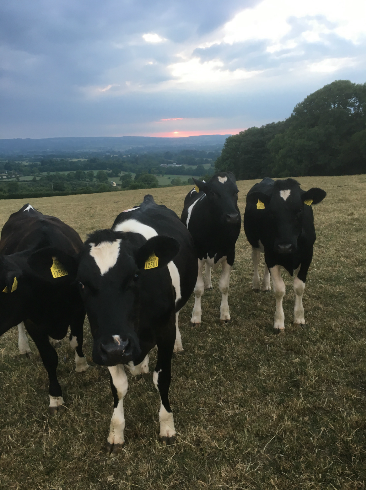 The heifers in High Shores, our driest field, and often a saviour as one of the only grazeable fields during wet weather

I was hugely relieved. It’s bad enough finding an animal ill or dying but to know I had caused it would have been devastating.

So, what do you reckon? Dopey? Dopey and conscientious? Or just plain overtired? 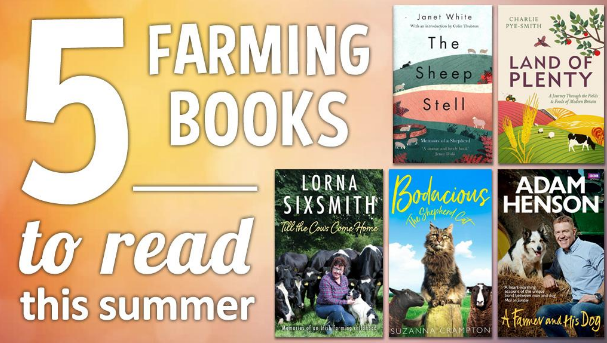 And if you would like to hear more about farming in our corner of Ireland, my memoir Till the Cows Come Home covers three generations of farming life. I was delighted that it was included in ‘Five summer farming reads’ in the Farmers Guardian this week. If you’d like the convenience of ordering it online but also want to support an independent bookshop, then do order it from Kennys  – they ship worldwide for free. Also on Amazon of course 🙂