As the bulls will be going to the factory over the coming weeks, I remember one particular bullock that had such character. ?Perhaps this story also shows that although farming is a business and has to produce a profit, some animals can be very special to farmers.

As a dairy herd, all of our calves are sired by mostly AI, using top dairy bulls and we finish off with one of our own dairy bulls but years ago when we first took over the farm, an Angus bull was used on the heifers to ensure easy calving as they tended to be smaller calves. (Heifers are first time calvers). The calves (male and female) would then be kept and fattened at two years of age and sent to the factory although we occasionally put the heifers in calf and sold them as suckler cows.

An Angus bull was born at 7 months gestation and miraculously he survived, not much bigger than a dog he was fed on a baby’s bottle initially. He would have been completely black like the bullocks in the photo below. 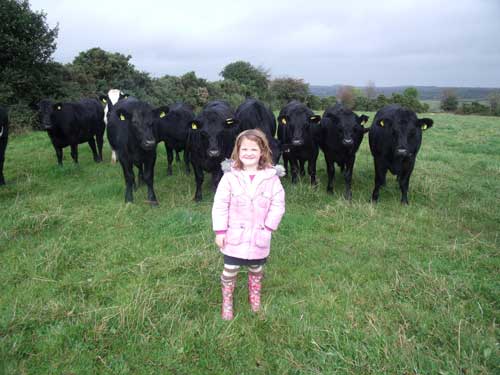 Whether it was because he was hand reared (although all our calves are bucket fed) or he got hand care for longer but the bullock was always tamer than any others. He always came close to Brian when he was herding them and seemed to have more personality than any of the others.

The day came to bring him to the factory and Brian hated doing it but it is part of farming. Farmers seem to often have their particular favourites and many cows may be kept a bit longer than they should be if they are indeed favourites but a male one has to go. Having delivered the batch of 8 cattle to the factory, Brian went down to the pen where the eight of them were left and the Angus bullock came over to the edge to be rubbed down. It was with difficulty that Brian left and headed home on the tractor.

2 thoughts on “A Special Bullock”