Christmas to me means nativity and school plays, lots of good food, not to mention plenty of time for reading, relaxing, crocheting, writing and decorating. Hmmm, I think I need each day to have 36 hours instead of 24! I’m making slow progress with the decorating and didn’t read as much as I thought I would either but there was plenty of relaxation and board games!

I met Karen Power via twitter, a mutual friend introduced us to each other. Finding that we were both married to farmers and self published authors, we met up for a coffee before Christmas and did lots of comparing of notes. We talked so fast that I think we managed to fit about 3 hours of chat into an hour, sharing experiences, tips and plans for future writing. 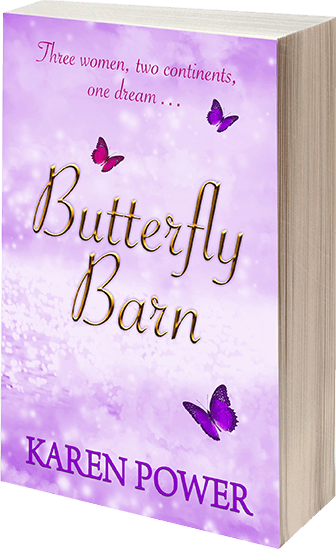 I had read about a quarter of Butterfly Barn when I met Karen and was then even keener to get back to it.?Set in Co. Waterford, the novel does a lot to highlight the beauty of Ireland and the increasingly growing potential for tourism. It made me renew my wish to retire to a cottage near the beach! Containing the themes of love, romance, family and friendship, there’s plenty to enjoy within its storyline.

I thought Butterfly Barn is an ambitious novel in that it seemed to me to have many more characters than most “women’s fiction” novels. It focuses on three characters in particular. Grace who is working hard to build up her business, has agreed to marry Dick but wonders if she is doing the right thing when she spots her first love at the airport. Jessie, happily married, one son, wants more children. Sophia, widowed, American, visiting Ireland and chasing dreams. Karen also manages to provide viewpoints from many other characters which include: Jack (Grace’s first love), Richard (Sophia’s son) and Kate (Grace’s younger sister) – no mean feat at all. I don’t read ‘chick lit’ that often but have noticed that it often happens that I find myself wondering what a male character might have thought, that they are shadowy and it can be irritating.

There’s plenty of serious topics highlighted in the novel too – it’s isn’t just a story about a number of characters – pregnancy loss, the effects of dyspraxia, agri-tourism are amongst the topics. I have to admit I like to read darker novels (just my own preference) and that while the character experiencing pregnancy loss had a rant at God on the beach and experienced depression, there was so many other things going on, that I felt it was glossed over somewhat even though it was a major theme of the book. Having said, that, the pages describing the pregnancy loss did move me to tears and it’s not many books that do that!

If you enjoy Irish contemporary fiction, you should enjoy this novel.?Butterfly Barn is the first of Karen’s novels, expertly presented and flying off the shelves, with lots of people (including me) looking forward to the sequel. It’s available on various ebook formats and in many Irish bookshops. Check out Karen’s website for more details.