The Beasts They Turned Away by Ryan Dennis is a very different novel to the norm. When I think about it, most farming books I’ve read tend to be memoir or definitely non fiction. So many novels with farms as their setting are romantic or comedic. I’m thinking now of novels like Cowgirl or the Aisling books and while it’s great to have farming showcased, the authors get so much wrong that it sets my teeth on edge. 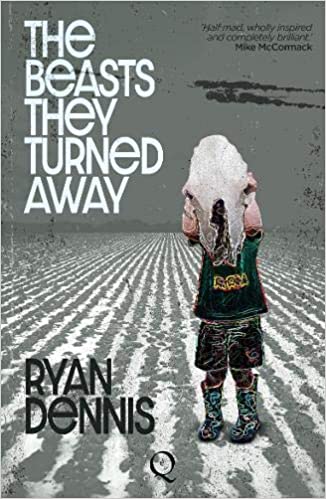 The Beasts They Turned Away is about Iosac Mulgannon, described constantly as ‘the old man’, farming in a small community and looking after a young child who is deaf and mute. They experience much hostility from those in their area, who suspect the child is cursed, want to remove the child and with the farmer’s mounting debts, he faces adversity from the bank and his suppliers as well. I found myself continually trying to work out when the novel was set but in so many ways, the issues raised are timeless. Neighbours commenting on what each is doing, support from some, hostility from others, the claustrophobia, the tension you could cut with a knife at times.

The descriptions are beautiful, often harsh, very detailed. I found myself only able to read a few chapters at a time. It’s quite an intense book with its emotive language, the darkness and the heartrending nature of some occurrences.

I’m a very matter of fact person and I often found myself wondering ‘did he suggest that actually happened or is it metaphorical’ and then ‘oh, for goodness sake, it’s not real, all in a book anyway’. The hurl had huge significance throughout the book, or at least it did in my interpretation. The old man seemed to have won much praise and prowess with the hurl in his youth and given the importance that many people give the game, he might once have been worshipped as a local hero.  He reads the story of Cuchulainn to the boy. The hurl is now a walking stick; a weapon; a defence mechanism and also a tool with which to hit an old cow. When I read that short chapter, I had to put the book away for a few days.

The child wears the skull of a cow over its head, seemingly for months on end. Signifying his deafness and muteness, further marking him out as different and/ or demonstrating his kinship with the bovines and the land?

The novel opens with a description of the old man driving an old Ford tractor, a dead cow in the bucket of the tractor. Initially I presumed he was moving the cow into position to be collected by the knackery lorry but no, he is bringing it to a copse where the bones of other cows lie, where foxes and other animals have chewed the animals down to bone. Beautiful descriptions of a cow graveyard but the practical side of me is screaming ‘you can’t do that.’  Bovines have had to be collected by knackeries for decades (I’m not sure when it became a legal requirement, certainly in the 1970s and probably before) and paperwork has to be correct. I’m not sure what the Department would do if they found a farmer was burying bovines but it wouldn’t be pretty. Then I tried to place the novel into a decade yet found the issues within it are timeless.

I often found myself wondering if something had really happened, if it was metaphorical and signified something else and then remembered, it’s fiction, it’s a novel! There was one short chapter which describes the old man working at the rear of the tractor and comes in close contact with the PTO. Given the state of the yard, house and farm in general, you can bet that health and safety wasn’t on the top of this farmer’s agenda. Why wasn’t his arm removed by the PTO? Why wasn’t he killed by it? I still remembered the cow being hit by the hurl and it wouldn’t have bothered me if the old man had suffered a long and lingering death!

The milkings twice a day happen as naturally as breathing. Indeed, there is one lovely description whereby the old man reckons if he were to die in the bed overnight, his body would still get up to milk the cows.

At times I felt sorry for the old man (his desperation to protect the boy, to hold onto the farm, to ignore the mounting bills, to keep farming in his own way surrounded by expanding and improving farmers)  but I never warmed to him. At times I wanted to reach into the pages and hit him with his own hurl to be honest.

The Beasts They Turned Away would be a good choice for a book club I think, particularly for those who farm the land or live in small communities. There’s plenty to discuss, including the changes within farming (still happening) and within communities. Some for the better, some for the worse. In many ways, the book strikes me as being a eulogy to a way of farming that has disappeared. It’s a book I’d like to read again sometime and I’d imagine I will find even more amongst the pages.

Update: I discovered afterwards that the cow was actually dead when the old man struck it with the hurl. The book is not in chronological order. (Phew – am relieved). It just shows why it would be a good book for a book club, so many different interpretations especially if the readers are from a mix of backgrounds.

One thought on “Book Review: The Beasts They Turned Away”