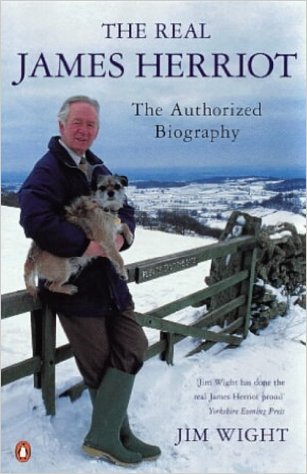 Along with millions of others, I’ve loved James Herriot’s series of books. I read them as a teenager many times, my copies are very dogeared!  James Herriot’s books was one of the reasons I wanted to live in Yorkshire but never got there. Maybe we’ll head there for a while when we retire. I reread them again about two years ago, enjoying them just as much. I’ve just read The Real James Herriot: The Authorized  Biography by his son Jim Wight and discovered that I’ve never read his final book so I’m looking forward to getting a copy of Every Living Thing.

The biography covers Alfred Wight’s life from the cradle to the grave, written in a chronological order. One of the enjoyable and endearing qualities about his books was his ability to be mildly self-deprecating – he always seemed to look up to the Farnons as more intelligent but Wight was not only academic but talented musically. As is clear from his books too, becoming a vet wasn’t a path to riches and he seemed to have many financial struggles as well as occasional bouts of depression along the way.

It’s really interesting finding out how his life varied from the books: for example, his wife wasn’t from farming stock, “Siegfried” wasn’t overly pleased with how he had been portrayed in the first two books so Wight toned down the stories involving him in later books, and as you’d expect, he changed names and details of most of the farmers and owners of pets.

What I found incredible, and which really helped Jim Wight in the writing of the biography, was the extent of correspondence left by his dad. Unpublished short stories, letters to his parents, letters to others, letters from publishers – there’s a plethora of sources. I got the impression that Jim was trying to protect his dad a little bit in the writing of it, especially when defending a decision of Alf’s or sticking up for him when revealing someone else’s dislike for something he’d done. The thing is I think all readers of the biography adore Alf Wight / James Herriot so we would have felt protective on his behalf. There were very little about Joan, his wife. Perhaps because she didn’t want to be much in it and after all it was a biography about Alf but it seemed a bit sketchy. My  memory of her, having read the book, is of her scrubbing the stone floors in “Skeldale House” on what sounds like a daily basis, not because they were continually dirty but she sounded like a perfectionist.

Jim revealed the background to many of his dad’s funny stories and also shared some of the details he changed so that people wouldn’t sue him for libel. Apparently he did this so well that one person was disappointed he hadn’t been included (even though he was) but didn’t recognise himself. A woman who loved pigs confided that the story could have been about her, but didn’t realise it was – because Wight had changed it to a male character.

I also enjoyed Jim’s descriptions of the publishing process. His dad was in his 50s when his first book was accepted and sales only really took off when he got a US deal for the first two books which were published as one in “All Creatures Great and Small”. It’s interesting that his early books were serialised in a newspaper too, which sounded quite lucrative. Part of the book also deals with all the tax he had to pay as income tax was 83% for high earners then. Alf refused to do what most writers did: go and live in Jersey for a year and avail of it as a tax haven. Part of his reasoning was he was 60 and wanted to enjoy the rest of his years in Yorkshire where going to watch Sunderland play was important to him. 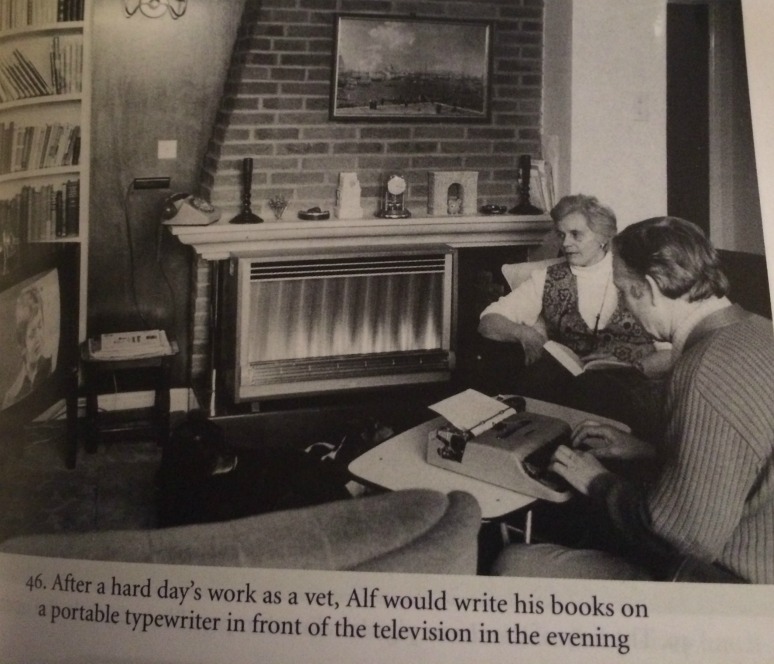 I love this photo of Alf sitting in his living room, with one ear to the television and typing away at one of his stories. I do that too, I totally tune out of the TV or radio until I need a few minutes break and then once another idea strikes for the next page or so, off I go again. I’d imagine the clicking of those typewriters keys were fairly loud though!

We all know Hemingway’s expression “The first draft of anything is shit” but when you’re writing and you know it isn’t great, it can be hard to keep going sometimes. I really appreciated the inclusion of this example of how a sentence from a first draft was edited to make it so much more dramatic and really demonstrate Siegfried’s personality in all his urgency.

First Draft: When he arrived at the house he found he had forgotten to take his p.m. knife and decided that he would have to borrow a carving knife.

Final Copy: We arrived at the farmhouse with a screaming of brakes. Siegfried had left his seat and was rummaging about in the boot before the car had stopped shuddering. “Hell” he shouted, “no post mortem knife! Never mind, I’ll borrow something from the house.” He slammed down the lid and bustled over to the door.

Just that single example makes it much easier to return to my first draft and keep plodding away!

I enjoyed this biography and have passed it to my dad to read. I’m looking forward to reading Every Living Thing soon. If you enjoyed James Herriot, you’ll enjoy this biography.