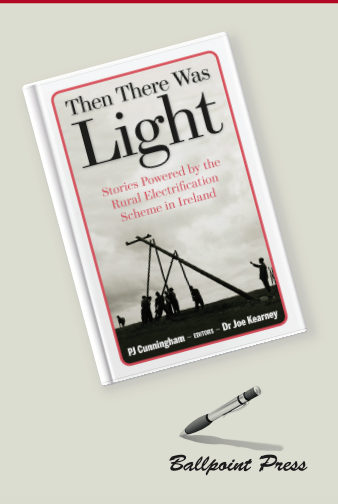 Then There Was Light is an anthology, mostly memoir with a couple of fictional stories and a few poems, about people’s experiences of when the electricity arrived in their area and the effect it had on their lives. It’s now 70 years since the rural electrification scheme began. Stories reveal the hostility to “the electric”, often due to fear about the cost or a wish to keep to traditional ways of lighting the home. It was often women who persuaded the menfolk in the house to get it in, knowing that it would make their lives so much easier. Unless a reasonable number of homes in an area signed up to it, it wasn’t economical for the ESB to supply it so too many people refusing it meant everyone in an area had to do without. It seems the parish priest was also influential in changing people’s minds.

Although the theme is the same throughout, the stories vary in mood: from the hilarious tales of washing machines dancing around kitchens and the mother wondering if the brown bread from her new oven would taste as good as from the range, to the sadder tales of broken relationships and pregnancies as ESB workers came into an area and left again. Many ex-ESB workers also shared their experiences of digging poles for good wages and their various methods of persuading farmers to let them put poles on their land. My favourite anecdote was the tale of the widow woman and parish priest, she was disapproved of as she had a single man as a lodger but she got her own back on the priest by suggesting it was improper that he was in the house with a single woman – his housekeeper. A very brave move back then. (It reminds me of when my brother, aged 12, was in hospital with glandular fever and my mother was staying with him. A priest called in and said he was too old to have his mother staying with him. She drew herself up to her full height of 5 feet 3 inches and told him that as he wasn’t a parent, he couldn’t expect to know how a parent feels – that was the end of that debate!)

We got electricity in Garrendenny in 1949 but by a lucky fluke. Although only a couple of miles from Ireland’s most populated areas (due to the number of people who worked in the coalmines), we were too far away to be considered an economical holding especially as other neighbours were resistant. Then the decision was made to run electricity to a nearby coalmine and with a ground rent of £14, we were considered economical enough. The benefits and some stories of what happened once electricity was installed is included in my story story “Vanishing Dust at the Poor Man’s Castle” within the anthology.

The book also contains many photographs and advertisements from its early days. It really is a treasure trove and well done to the ESB, PJ Cunningham and Joe Kearney for bringing it about. There will also be a radio documentary on 5th November, the 70th anniversary of the first pole being erected. Then There Was Light is a perfect Christmas gift for anyone interested in Irish rural history – available in all Irish bookshops and on Amazon.

3 thoughts on “Book Review: Then There Was Light”