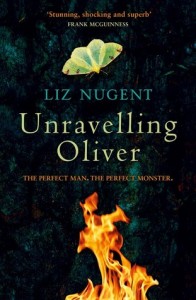 Unravelling Oliver – a bestseller and a first novel for Irish author Liz Nugent, I bought this book some time ago and got around to reading it this weekend. I flew through it – it is such a page turner. The shocking start (when Oliver attacks his wife Alice and she ends up in a coma in hospital) certainly got my attention. What kind of ?a man was this Oliver? He certainly seems dominating, likes being in control, ensures his wife doesn’t get pregnant but tricks her. Why doesn’t he want children? Although my sympathy was with Alice, and I didn’t have a particularly high opinion of Oliver, it was hard to hate him.

The novel is told from the perspective of many characters, each one taking a few chapters. There’s Oliver, the famous author, the ‘street angel and house devil’. There’s Barney, kind and good natured, who loved Alice and let her go. There’s Eugene, Alice’s brother who has a mental age of 7. What about Moya – the next door neighbour who has a long standing affair with Oliver. There’s Michael, one of Oliver’s friends, he has his own demons trying to come to term with his own homosexuality in early 70s Ireland, what happened in 1973 that drove himself and Oliver apart? And there’s Veronique, single mother and owner of a vineyard in France. How are these people interlinked and what did they do that contributed to Oliver being pushed over the edge, taking out all his anger on his defenceless wife? How does Oliver manage to write his books in just an hour a day? Alice, his devoted wife, who illustrated all his books, who turned down the adoring Barney to marry Oliver, who has had to remain childless, not only is she silenced by being in a coma but she isn’t given the privilege of narrating a chapter either and telling us her side. Doubly silenced.

The Ireland of the times is constantly in the background, when Ireland was far from being multi-cultural, when priests protected secrets, when kids went to boarding school from the age of 6, when social class was even more evident, when homosexuality was illegal and the marriage bar (which prevented married women working) was still in place.

The story laps fifty years, yet is a relatively short book. Would Oliver have turned out like this if he hadn’t been neglected as a child? Nature or nurture (or lack of nurture) – which was the cause of this horrific attack and other crimes? You’ll ponder plenty of questions as you read this novel. Unravelling Oliver is a surprisingly easy read despite the brutal beginning. Poetic, beautiful language, yet savage and cruel with unexpected kindnesses by some characters. A real page turner.??Definitely recommend it.