Working from home means I don’t talk a lot. I can still remember having a croaky voice after a couple of days of teaching after each summer holiday – how the extra talking affects the voice and the energy levels. Talking for 3 days at the Ploughing Match last week made me feel like I’d been steam rollered by the end of the third day!

There were record crowds at Ireland’s biggest agricultural show this year, about 80,000 on days 1 and 3 and a record breaking 120,000 on the middle day – the crowds on the main thoroughfares were like Grafton Street at Christmas! The weather was fabulous, dull mornings but very sunny afternoons. People seemed in reasonably jovial moods though I have to admit if I had to trek through 120,000 people with small children, I think I would have gone home but I’m not great on busy streets at Xmas either! People were happy enough taking their time getting through the crowds and queuing for free samples. I was in the Laois LEO tent, not on the main thoroughfare but a good location behind the HQ. Footfall was steady, not so huge as to put people off coming in but good enough to ensure there were almost always people passing.

I had ordered these stickers, mostly to engage those people who would probably retort that they’d never marry a farmer (as happened at other shows) and partly to see which would be the most popular. ?Interestingly, the ‘I Would’ far exceeded the ‘I Wouldn’t’. The stickers were great for getting people into conversation as after a couple of hours, people were almost dazed from looking at so much stuff so asking them ‘would you marry a farmer?’ and getting them to choose a sticker encouraged interaction and prompted many sales. 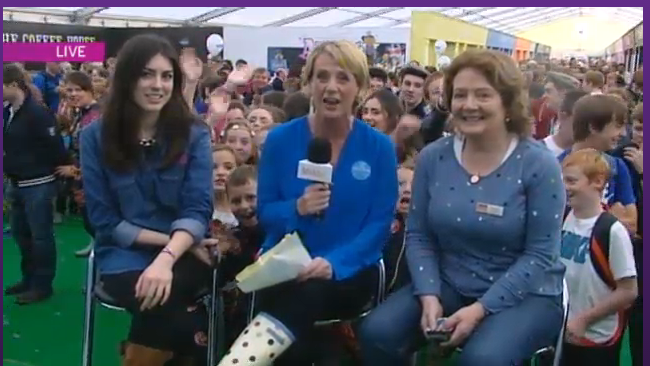 Even Sybil Mulcahy wore the ‘I Would’ sticker when presenting Midday on TV3 on the middle day! ?I got good press coverage coming up to and at the Ploughing Championships too, print coverage in the Leinster Express, Laois Nationalist, Irish Examiner and a small mention in Irish Country Living, and 7 radio interviews – most were local stations plus an interview on News Talk at the Ploughing. ?I was also interviewed twice for Irish TV (channel 191 on Sky). Many of the radio interviewers didn’t state where the stand was though but I hope it will deliver on sales in bookshops.

So many businesses have a presence at the ploughing for brand awareness, not necessarily to make sales. They are there to remind their customers of their existence, to chat to customers, get feedback, to get some press coverage if they can, make contacts etc. There’s probably also a feeling of if they are not there, their competitors might steal the limelight. Many of the larger companies offer refreshments to their clients too and this is growing in popularity again, Brian got lots of texts from companies inviting him to call in for sandwiches and tea. 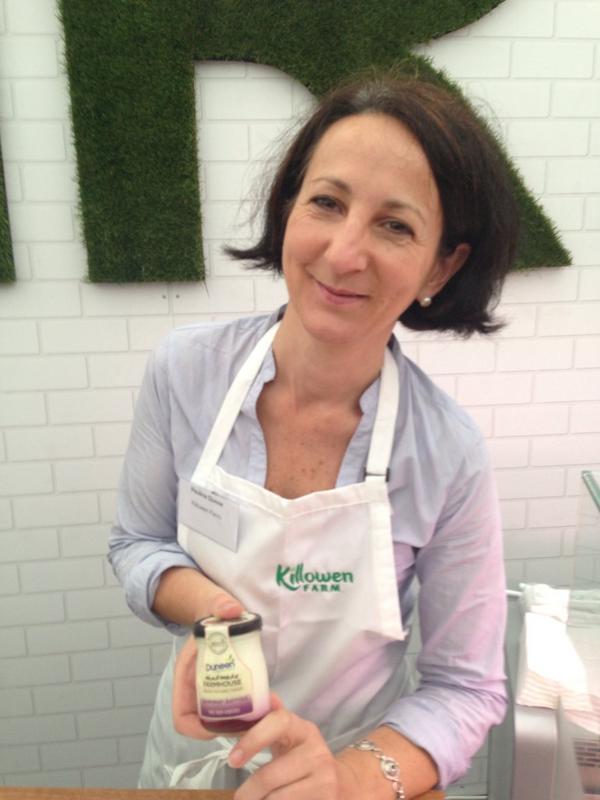 I didn’t get a chance to look around that much but visited Pauline from Killowen Farm in the Aldi marquee. So busy that is operated a one way system, the interior was designed like old fashioned shop front, one shop front for each section eg. there was one for dairy. Killowen Farm produce yummy yogurts and were providing samples from their brand under the Aldi label which is Duneen. I thought this worked well for brand awareness, for example, I’d never realised that they supplied under that name and it now means I will buy it when shopping in Aldi – it definitely grows trust in the brand too. ?I didn’t make it to the other supermarket marquees but I’m sure they were just as impressive. It’s a huge investment on the part of the small and medium sized food producers though – both in time and money. 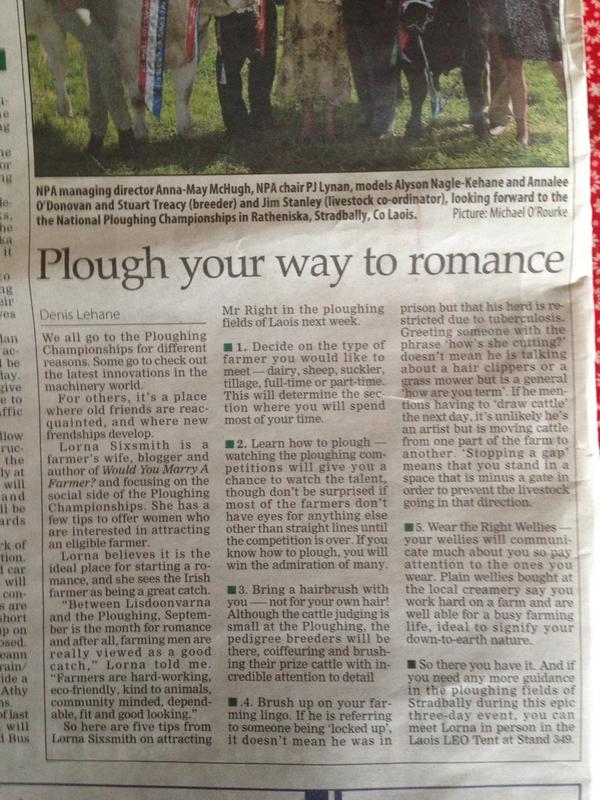 One thing I found interesting was people’s reactions to the book. Most had heard of it and it was intriguing to see what the source was. Many kids on the Wednesday said they saw me on Irish TV the day before. Many mentioned Irish Country Living, Laois Nationalist, Leinster Express , Teagasc magazine and Irish Examiner – proving that the recent mentions had worked. Radio, particularly the News Talk interview was mentioned. What delighted me though was the number of people who said they read my blog, and followed me on facebook and twitter. It really proves that social media works well. There were a few who had never heard of it and yes, it can be hard work explaining to them what it is about, especially when the brain starts to go! 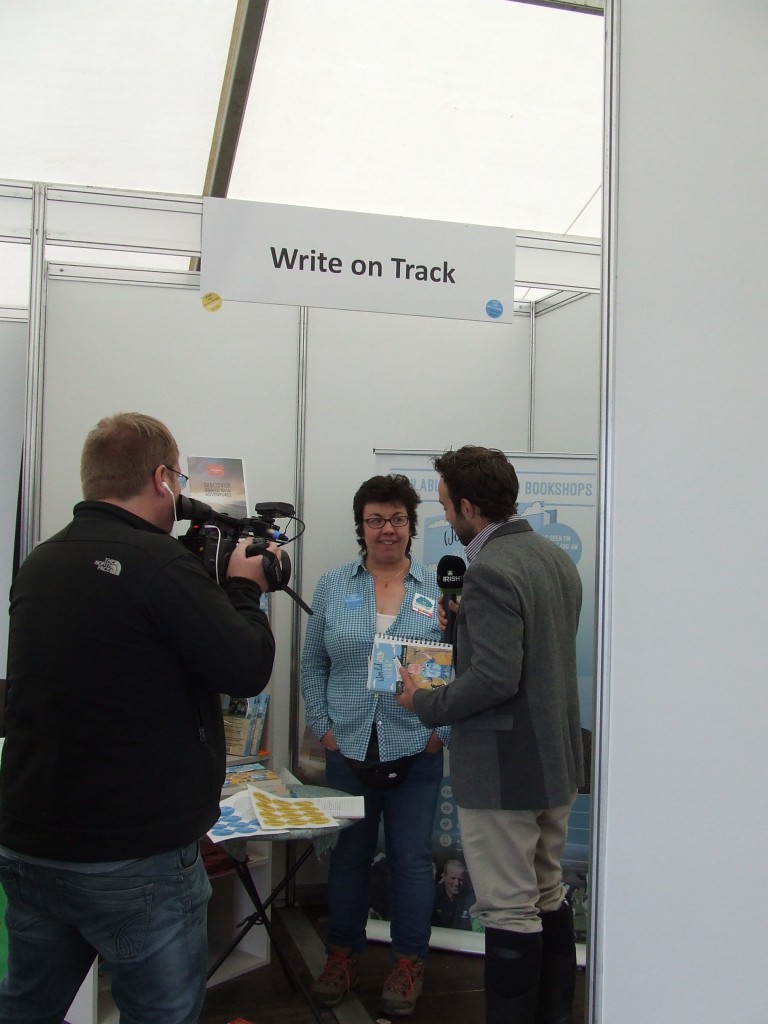 So the five million dollar question – how were sales? I’ll be honest, I thought I would have sold more. Having sold 44 at Tullamore from a not fantastic location, I was expecting to sell double that each day at the Ploughing – given the larger crowds and the increased press coverage but no, sales each day were comparable to Tullamore, selling about 140 in total over the 3 days. Thank goodness my stand wasn’t expensive!

So was it worth it? Well, time will tell. Just as for so many businesses there, the true value of doing the show will reveal itself over the next few months. For me, it will be the run up to Xmas. Doing the Ploughing meant that I got press coverage and time will tell whether people remember and decide to buy the book as Christmas gifts. Having got another print run, I really hope they do!

A lovely elderly gentleman rang me from the UK yesterday, he’d seen me on Irish TV and tried to get the book in Waterstones but they gave him my phone number and he rang to order it. What was also good was the number of people who came up to tell me that they had read my book and really enjoyed it. Fabulous to get that feedback particularly if there was someone standing there wondering whether to make the purchase or not!

Blog awards this weekend and then my life will return to normal and I’ll be starting back to book number 2!

10 thoughts on “Book Sales Update – At The Ploughing”