The efforts of Norma and Brian Rohan in setting up Embrace Farm, the holding of a memorial church service last June and another one tomorrow, the focus of the media on farm safety and the new laws put in place, for example, forbidding children under 7 to be on tractors, are all putting a focus on highlighting farm dangers. The fact is that farming is one of the most dangerous occupations, second only to mining. No one would bring children onto a construction site yet the proximity of the farmyard to the farmhouse can be a challenge for farm families.

A car accident is one thing but a farm accident is something else entirely. I can’t even imagine what it must be like to lose a family member in a farm accident and to see the same spot in the field again and again. Whatever about an adult dying, losing a child is something else entirely. Machinery is getting bigger, more powerful, faster. Livestock aren’t handled as much and can therefore be more flightly and unreliable. We are all aware of the dangers of cows that have just given birth, of bulls, of rams and sometimes it can just be a case of being in the wrong place at the wrong time.

What I do think is working in terms of awareness is sharing stories about how people died in accidents or how accidents could occur. We were coming back from Kilkenny one day and a bull had got out of the shed and was on the avenue. The dog was locked in his kennel so we couldn’t whistle for him. Brian got out to run the bull back up the lane but he wouldn’t move and I was ready to beep the horn and drive at the bull if need be. Brian reached for a pigtail stake and brandished it at the bull with a shout and off he ran back up to the shed but he took his time about deciding. Brian was replacing sheeting on a roof and having heard of a man dying from a fall off a similar roof, pushed extra dung into the shed so he’d have a soft fall if he did fall. He did have one fall (from the inside of the shed) and it could have been enough to damage a leg or a hip if the dried dung hadn’t been there. It really is about taking the time to calculate risks and reduce the chances of an accident. Farm safety statements are one thing but risk assessments need to be carried out all the time. 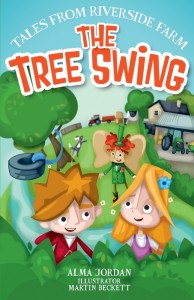 Farmer’s wife and marketer Alma Jordan set up AgriKids last year, having had the idea that children were capable of learning about farm safety and even informing parents and grandparents. She has published two books about Tom and Sarah. A tiny hedge sprite, Mr Brambles, also lives on the farm. The story makes it clear that parents can be so busy that they forget to put away possible dangers, that farmyards are not playgrounds, that there needs to be a secured gate between the garden and the farmyard. It’s ideal for 5-8 year olds. I asked Kate to read it and give it a score out of ten. They used to love the Apple Tree farm books – we had loads of them and had to read them again and again and again. As the kids were learning how to read on their own, they used to read the writing at the top of the page and I read the text at the bottom. She gave Apple Tree Farm ten out of ten and the Tree Swing 8 out of 10. The story is charming, the illustrations are lovely?and I can see it being a very popular purchase by parents at the Ploughing Championships. You can buy it here too.

The Embrace Farm memorial service is on tomorrow in Abbeyleix. They are expecting up to 800 people. I think about 400 attended last year if I remember correctly, a very respectful and emotional service as the names of the some of those who died in farm accidents were read out. I’m not going tomorrow but my thoughts will be with them.