This week’s farming focused on bulls and fertility! There’s wasn’t so much farming in my week this week between going to the Wexford Literary Festival yesterday (read about it here) and delivering a talk on Pinterest in Dublin during the week. This post comes with a mild warning for squeamish readers!

We did get four bulls tested for their fertility. It was the first time we’d done it and we’ll definitely do it every year now. We had intended getting it done before now as the AI finished last week. We don’t buy in bulls but use AI for six weeks and then use our own yearling bulls to ‘clean up’. ?Friesian bulls are just too dangerous now to keep them for long and our bulls are good enough but we just use them for the one season. The bull with the heifers was quiet enough in the shed but is very raucous now he is out in the field, the instinct for protecting his harem has kicked in. We had two in a shed for use with the cows. However, one seemed a bit lazy. The gate between their house and the cows opened one morning and while one guy was jumping around, the other was looking around blearily as if to say ‘what’s for breakfast?’. 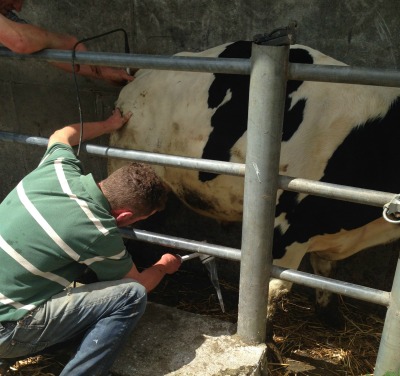 It’s an interesting process for the fertility testing! A large rocket-shaped tool is inserted into the bull’s rectum, there’s a hook that goes up around his tail to ensure it stays fairly stable. An electric current is plugged into it to make it vibrate slightly and that causes the spasms to start. ?They start at the rump and then work their way forward. It’s a bit strange watching them get worked up when there’s no female there to make them act. It’s a case of taking a sample then and it is read on the microscope.

The keen bull (with the cows) had low mobility so his fertility was only about 60%, not good enough to rely on. The lazy bull was very fertile but has put on a bit of condition and as I mentioned, just doesn’t seem that interested in too much action. Next up was the bull with the heifers who is fertile but has a wart! He’ll be fine with 3 or 4 heifers but there would be a risk that too much action would lead to the wart going septic. We decided to test the bull that is on the outfarm then and he turned out to be very fertile. ?Having gone out to see what the process was like and thinking it would take me ten minutes, by the time we got that bull tested and home, I was probably out there for 90 minutes – an example of how a small job on the farm can take a lot longer than you first think. Even though he is only 16 months old, I wouldn’t trust him as far as I’d throw him. I know he was put into a cattle crush, tested and then removed from his friends but I was glad we had the dog with us running him down to the home farm.

That’s it for this week, I’m beavering away with ‘How To Be A Perfect Farm Wife’, I’m at the stage that I’m wondering if it is funny or not because I am just so close to it – do put 11th September in your diary for the launch if you are able to make it. Would love to see you. ?If you’re interested in coming along to our Social Media Event for Foodies, do click the image below to book. Look forward to seeing you at one or both.