I used to be a reasonable baker.

I quite like baking as you can put everything into the mixture, put in the oven and just presume it will turn out alright. If it doesn’t, there’s nothing you can do about it at that stage. That’s what I liked about it – there was no expectation that this seasoning or that herb could be added during the cooking to improve the taste. Mix, put in oven, eat. Simple.

Before children, I hardly ever baked. Brian did most of the cooking before we returned to farming and I suppose when we were both working 9-5, we didn’t eat that much cake. When the children were small, I used to bake a lot and would get them involved in sieving flour or mixing a crumble mixture or putting the chopped rhubarb into the bowl.?

Sometimes my baking turned out fine, sometimes it didn’t. If it didn’t, the oven got the blame.

Then about two years ago, my daughter started baking on her own. I’d be outside feeding calves or doing whatever and she would be beavering away in the kitchen, making dough for her homemade pizzas or a Mary Berry All-in-one Victoria sandwich or a marble cake. I’d come in to a happy daughter, heavenly smells and a mountain of washing up.

Because she was doing all the baking, I didn’t have to do any and I genuinely felt that I’d forgotten how to. I made queen cakes one day, they turned out like rock cakes. I had the oven too high said my knowledgeable daughter. ?Then another day, I tried the Mary Berry Victoria sandwich and it turned out fine – perhaps not quite as good as her’s but it was good.

This week saw the annual school bake sale when the senior classroom bakes for the coffee morning and to sell the cakes. She wrote her shopping list so I could get all the ingredients, she planned her timetable and she spent five hours making her Mary Berry cake, scones, carrot cake muffins, a flower marble cake and profiteroles. I was tired watching her (and washing up!!). I made a biscuit cake in less than 15 minutes – that was my contribution. 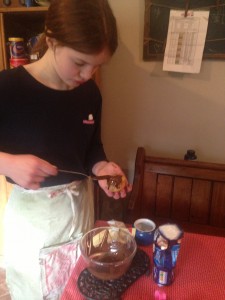 Every woman that has a daughter is extremely lucky but to have a ten year old daughter as beautiful and talented as she is – all I can say is I must have been very good in a past life!

Friday morning was ?a tad hectic. Due to all the baking, I had to drive the children to school as they couldn’t carry it all on the bus and as the twenty maiden heifers we sold were being collected at 8am, the plan was that Brian was going to milk early, I would feed the calves before dropping the kids off, come home to shower and tidy up as well as do a bit of social media work before heading back in to buy some cakes and chat over coffee and bring the children home. Cue some sick calves and I also had to fit in bringing some samples to Kilkenny. As I came in from feeding the calves, I knew I wouldn’t have time to shower and change before dropping the kids to school. There was nothing for it but to swop the wellies for boots (the leggings were fairly clean due to wearing waterproofs) and put a long coat on to hide the fact I was wearing farm clothing and I hadn’t bothered to put on a bra. As it was quite a mild morning, I thought putting on a hat to hide my wild hair was probably going a bit too far so ran my hands through it as driving along. No one seemed to notice anything or do a double take so maybe I always look like that.

I was interviewed for Horse and Countryside magazine a little while ago and picked up a copy on Saturday. Looking at one of the other authors featured in the piece, it struck me that she looked much more like an ideal farmer’s wife than I do – the boots, the white shirt, the jacket. I’m not so sure that I fit that image somehow 😉 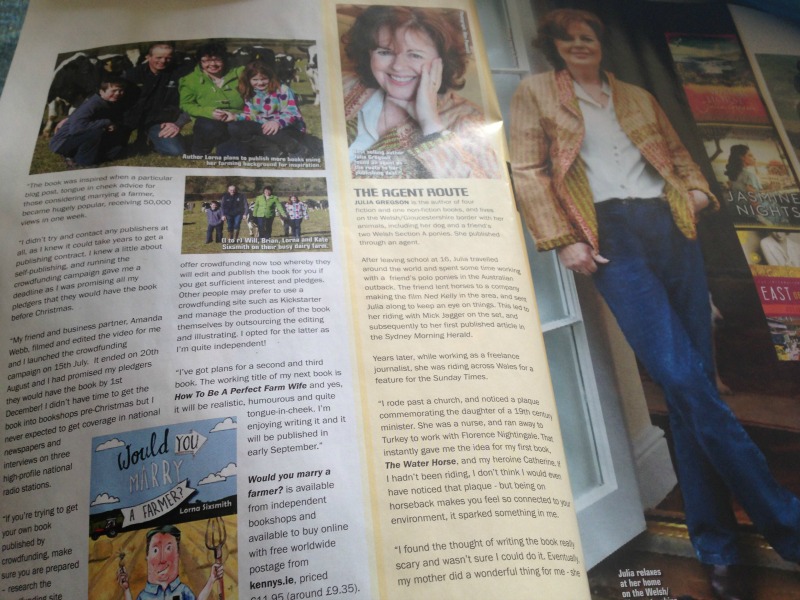 I did quite a bit of social media training and mentoring last week so it was a busy week. I seemed to be racing around all over the place. I’m hoping to get lots of writing done over Easter when the kids are off school for the two weeks but the days seem to be filling up fast between dropping them here and there, a week of swimming lessons, a piano lesson, bringing K and her friend to the cinema, dropping K to sewing classes …….

It really feels like the end of an era this week. We can now supply as much milk as we want. The milk quota situation is over and for the first time in thirty one years, Irish dairy farmers aren’t curtailed by an amount that was decided by previous supply. It’s a huge opportunity for many farmers, particularly those that have wanted to expand for ages not to mention those who want to start dairy farming. It all seems to be going a bit crazy though, Irish dairy farmers owe ?80 million in superlevy fines (that means they have supplied milk over our quota levels to that value, the fine is about 30c a litre). That’s ?80,000,000. It seems bonkers doesn’t it?

We’ve gone over to the tune of 1500 gallons. There will be farmers who are under quota, there will be some who are roughly on level of their quota and there are many who went way over it. I can’t remember what the superlevy usually stands at but it seems extreme this year. ?Farmers affected can pay the fine over three years rather than it hitting them all in one go but it’s still a significant amount of money. I’m not sure that the land will be overflowing with milk and honey from 1st April 2015 but interesting times lie ahead, that’s for sure. We’re going to increase from 86 to 110 cows but I can’t see us going too mad. 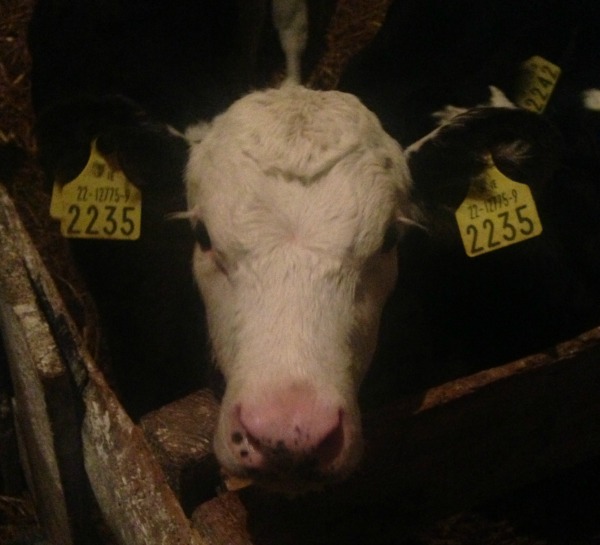 Some of the teat feeders have compartments which makes it easy to see if a calf is a slow or fast drinker. If a calf is slow and not getting enough milk, we’d usually move it to a pen of younger calves. Having moved the eldest 29 across to the three large pens, where a group of 9 were feeding from a ten teat feeder, I usually just scooped some of the milk out of the compartment that had no calf drinking from it – just in case a greedy calf ended up with a huge bellyful. I’d noticed that the Hereford calf was one of the fastest drinkers on it. One evening, there was no full compartment left, all were about half empty and I couldn’t understand it – how come they were all down to roughly the same level. The hereford calf was over at one side, on the second last teat but he was working both the last one and the second last, giving himself a double feed! No wonder the herefords are thriving so well.

We brought another hereford calf into that pen too, swopping her with a slow feeding calf (putting him in with the younger ones), it didn’t take her long to acclimatise to the different feeder and I was amused this morning to see both hereford calves, having started at the right side of the teat feeder, worked their way around to the left, making sure nothing was left after all the other calves had finished sucking. 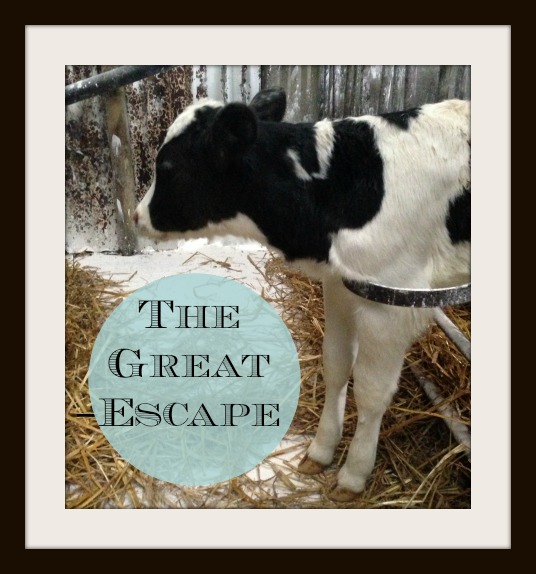 Tnis little guy decided to head off on a little adventure, getting one leg caught in the bucket ring and of course, I thwarted his plans for an adventure and popped him back into the pen.