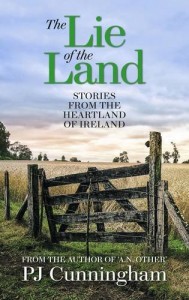 The Lie of the Land is a series of eighteen stories remembered and retold by PJ Cunningham about his farming childhood growing up in Ireland. Warm, sad, funny, poignant – they also shed much light on the Ireland of our past, much of which has disappeared. ?As was common in Ireland then, men married late with his grandfather in his 50s when he married his young wife and his own father was 45 – he had to wait until all his younger siblings were sorted before he could marry.

It recounts farming of a bygone age, of family and neighbourly feuds that lasted through generations but also how communities helped each other through thick and thin. How the hospitality of a cup of tea would be offered to every caller, how the birth of triplet lambs or twin calves was an event that was talked about for miles, how the death of animals caused angst and concern to the whole household.

My favourite stories from the 18 include the visit from the Protestant neighbour to the author’s aunt. ?Welcome for a few nights as he called for tea and chat, he was wearing out his welcome so to get rid of him she instructed the whole family to drop to their knees and start saying their rosary as soon as they heard him coming. Although the rosary was said every night in the author’s house, his aunt’s family rarely said it. Once the neighbour saw them kneeling, he beat a hasty retreat and she chuckled to herself wondering if they were the bigger Protestants after having made a mockery of the rosary. ?Much is made of the differences between Catholics and Protestants over the years and this shows that for the most part, they got on well, although they kept the boundaries of prayer and church services.

The story of his grandparents arranged marriage showed how his alcoholic grandfather’s siblings were determined to get him off the drink so he could be married to the farmer’s daughter with her own farm – once they were married, he took on the ‘acceptably male’ jobs of organising the use of their bulls to neighbours’ cows on heat, going to the mart and other matters dealing with the public. The problem was that once he went towards the town, he found it almost impossible to stay away from the drink and his wife plus her sister were left in the quandary of how to deal with him and the situation. As women on the farm, they were expected to stay in the background and let him adopt the work in the ‘public sphere’. The author’s mother clearly remembered the turmoil caused by the alcohol and before dying of cancer, made her sons promise to never drink.

If you are looking for a nice read, stories that reveal the social history of Ireland and her farming people, The Lie of the Land ?is a good book. You will read it in a sitting by the fire and enjoy.

5 thoughts on “Friday Book Review: The Lie of the Land”