Do farmers ever really retire? Even the odd one who takes up golf or heads off on month long holidays will still potter around the home farm or may even start up a small enterprise on a few acres on an outfarm. It’s said that a farmer is still a farmer until they are six feet under and I’d believe it.

Many are still staying in the driving seat until in their 70s and beyond. The reasons vary between not having a successor or not wanting to hand it over to the successor in case the marriage fails and the spouse walks off with half the farm. Even for those who have handed it over, they do like to keep a finger in the pie and know what is going on. And yes, their expertise and knowledge is often invaluable and usually appreciated. However, on occasion, you just might hear expressions like these:

You’re trying to repair a machine and rather than going away and leaving you to it, he is hovering and sighing and saying things like “That’ll never work”. Rather than admit defeat, it makes you all the more determined to ensure that it will work.

You buy something, a new piece of machinery or perhaps a pedigree animal, and he’s not convinced of its worth. You’ll hear “What on earth do you need that for?” 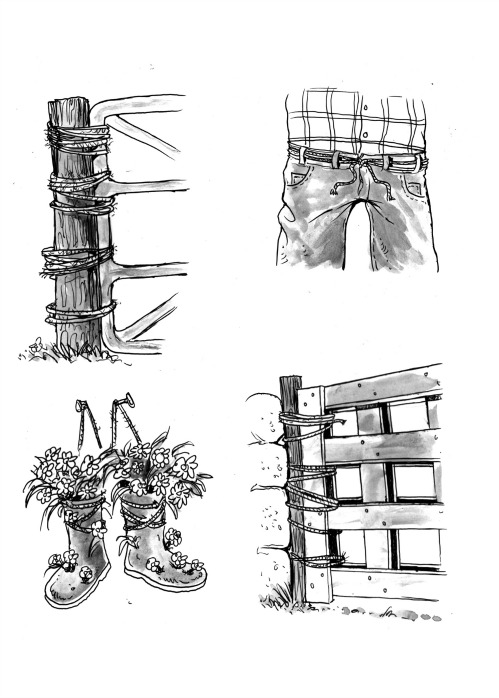 Well, he’s been using baler twine in various ways as a means to save money all these years – what do you expect?!

You are culling one of his favourite old cows and he doesn’t approve. He knows it makes economic sense. After all, she keeps getting mastitis, her udder is nearly touching the ground and she’s not in calf. He’s not going to stop you but he’ll let you know he’s disgruntled by saying “That one paid a lot of bills” and let you live with the guilt!

Your new enterprise or different way of doing things didn’t turn out as you had hoped – for whatever reason. However, he’s adamant that everyone will know he didn’t have anything to do with it. “I let him find out the hard way, I knew it wouldn’t work but sure, he wouldn’t listen.”. He’s off the hook and you look like a fool.

I wonder if it’s different in other countries. I know that, in America, many people have failed businesses, learn from their mistakes and start again. They are admired for this but is it the same in farming? It often seems that, in Ireland, everyone remembers failures or indeed, mistakes.

I found a great quote in a book written by a travelling writer in 1830 which demonstrates perfectly what it’s like in Ireland. Yes, I know this was 1830, but things haven’t changed all that much.

He will over a glass of porter tell you all about the local ancestors. He stands in Mike Finnegan’s drink-shop brooding parentage. He knows everything about everybody.

“D’ye see that man now?” he will ask, half turning from the saloon counter and pointing with his pipe to indicate a man in the street, “That’s Paddy Milligan, the Sheep Stealer!”

“What?” you ask, surprised. “Does he steal sheep?”

A grim, condemnatory look wil come into the man’s face and he will tell you solemnly:

“Shure his grandfather was hanged for sheep stealing!”

So tell me, can you add to my list with any examples of what your farming dad says?