I hope some farmers won’t give others a bad name, like my darling husband did when in the chemist last week. Popping in to get painkillers and antibiotics after a trip to the dentist (remember how the gate smashed into his mouth and broke a tooth), he decided to get his Wellness for Him (or whatever they are called) tablets as I keep forgetting to get them. And just to prove that he thinks of me, or doing his best to ensure that I’m fit and healthy for the calving season, he decided to get me a packet of Wellness for Her.

“Can you giftwrap them?” he asked the sales lady.

“Well, she won’t get anything else”

“Well, you’ll have to get her something else, I’m not gift wrapping them”

Never fear, he was in a large gift shop on  Sunday when visiting members of his family so bought me a surprise. It can be returned within 30 days if it turns out to be something I really don’t like and I have to admit I’m intrigued. I usually end up buying myself books from him which I’ll still do!

But what can farmers get their wives for Christmas or indeed, a happy year ahead, that shows they know them well, or are thinking of them, or might even be romantic?

So – print out these farmer new year resolutions and enclose it with your Christmas card and the gift you bought! She might just frame it to remind you!

And of course, buy her a copy of How To Be A Perfect Farm Wife for the Christmas stocking too. 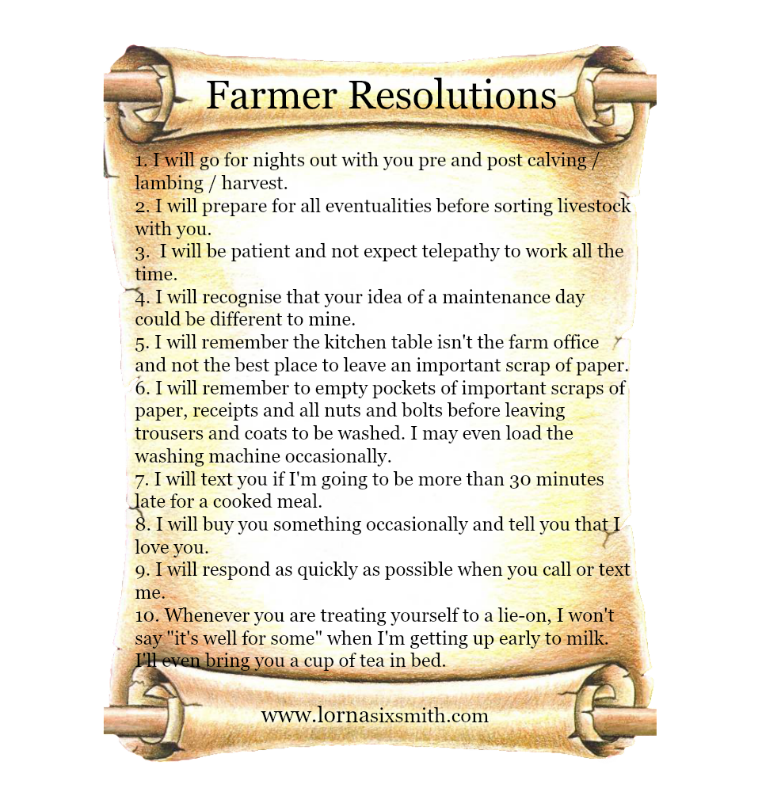 Merry Christmas to you and yours. Lorna x

One thought on “Gifts for Farm Wives from Farmers”