We got Sam from a neighbour and he has been the last surviving dog from the litter for a couple of years, two of his siblings went blind but he has always been in the best of health. He’s only ever had three trips to the vet: for the snip, for a suspected concussion when kicked by a bullock, and for an injury to his neck (the bucket of the loader grazed him and two days later we realised he had significant skin damage. 27th December and trip to the vets for antibiotics and dressings with daily dressings by us for about two weeks). 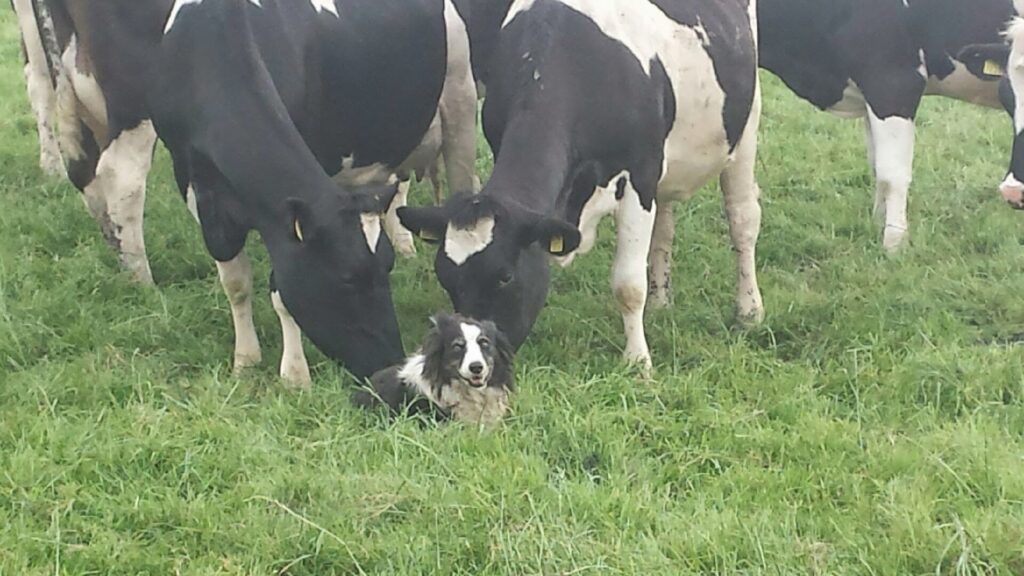 He was such a brilliant working dog. He had a dogged determination and the most obstinate of steers wouldn’t get away from him. He was calm with the cows yet loved the challenge of working with bulls when we did bull beef. We’d never have loaded bulls without him. We just had to stand there and he did most of the work getting them into the cattle trailer.  Sam went everywhere with Brian. He absolutely loved the loader and as he had wonderful spatial awareness, he adored running alongside it. For some reason, the motion of the loader bucket fascinated him. When Brian was feeding bulls, Sam would keep them in place in the shed. There was once that Brian was going up to the top farm to feed them and then realised that Sam wasn’t running alongside. He was swearing to himself (as he wanted Sam to keep the bulls in the shed when he opened the gate) but when he arrived up in the yard, he realised he didn’t have the bucket on the loader. Down he had to travel to the main yard and there was Sam, waiting patiently beside the loader bucket, knowing that was the next job to be done. 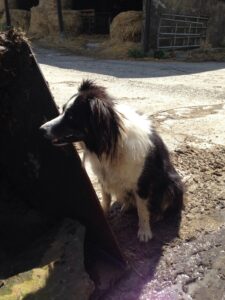 He started to slow down around the age of 7. He was getting bored bringing in cows yet working with bulls was still an exciting challenge so he stepped up to the mark for those tasks. We got Lou as a pup when Sam was 9 and he reacted by becoming more active, whether in competition with Lou or to show her the ropes! Then he used to come for the cows but let Lou to do the work while he waited near the gate, yet still expected praise and a pat as if he’d been running around as well. 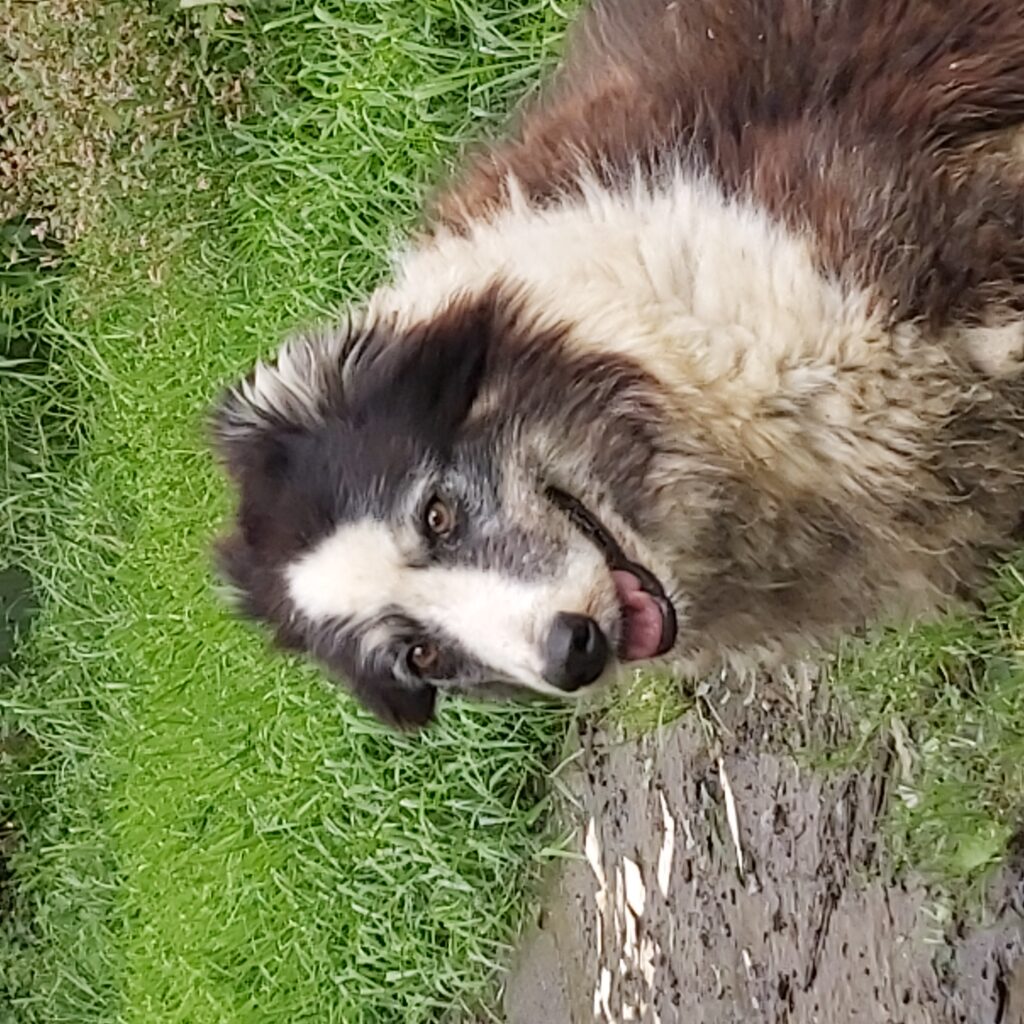 He’s been fully retired for about three years now and he’s had a great retirement. He sleeps a lot, he runs alongside the loader, he tags along occasionally for the cows or he meanders around the yard when we are dosing cattle or doing other jobs. Every spring, for a couple of months, one of my morning jobs is to bring meal to the calves in the top farm using the loader. Lou has terrible spatial awareness regarding vehicles so she always travels in the loader with me. Sam used to run alongside for the first couple of hundred metres and then return home. Yet, for the last six weeks, he has been more energetic and comes up to the top yard with us. He then waits by the loader while Lou and I are herding whatever cattle are up there and feeding the calves, and then he trots ahead of the loader heading home.

A few weeks ago, he went for the cows with Lou and Brian. After milking, I was putting the cows out (across the lane and up on the top farm) when Brian rang me to ask if I had seen Sam in the last couple of hours. I hadn’t. He wondered if he had come home from the field. I was a bit concerned as we have come across a snare once or twice so said I’d walk home that way. There was no sign of him but then Brian rang to say he found him in the hay shed, sleeping on a different pile of straw than normal. As he is deaf, he doesn’t hear us calling him from a distance and he had been in a deep sleep. 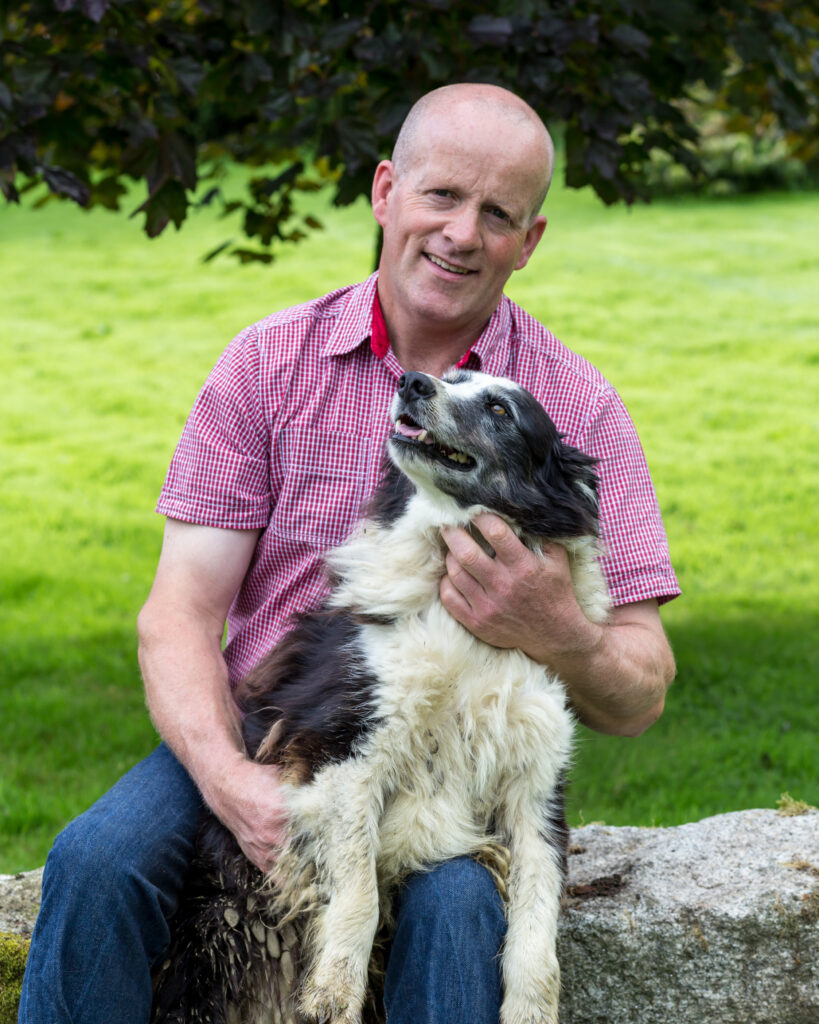 There’s many the time that I have wondered how he has escaped being hit by the loader or another vehicle. Silage tractors have had to veer around him on occasion as he has the attitude that they can move. Yet, his spatial awareness remained as good as ever.

Last Tuesday, we covered three pits of silage. Brian and Kate putting tyres into the loader bucket, Brian driving around to tip them up to the top of the pit where Will and I distributed them. Sam loves running alongside the loader and although he lay down occasionally, he had a really active day, thoroughly enjoying himself.

That evening, Brian was milking while Kate and I threw the tyres around and Will lifted the tyres up to us. Sam was in his element. We finished around 8.30, the kids went inside for showers and I had to go up to the top farm to check on two calves I’d kept indoors and to herd the heifers. The contractors were going to be up there wrapping silage bales and drawing them in. Normally, I’d walk up and enjoy the stroll along the lane but I was tired and decided to bring the loader.  Sam was asleep beside it so I woke him up, put Lou on the loader and off we went, Sam trotting happily in front. I got to the yard, parked, and first went to herd the heifers. As I was coming back, the contractor’s girlfriend had walked down to meet me and said that Sam was beside the loader, that she wasn’t sure if he was asleep or dead. I just laughed, ‘Oh, if he’s beside the loader, he’s asleep, plus he’s deaf so he wouldn’t hear you.’

I didn’t think any more about it, went to check on the two calves in the shed and gave them more food. As I walked back to the loader, I noticed Sam wasn’t there, which was strange. Then I wondered if I had misheard or misunderstood the young woman. I walked around the corner so I could see down the lane and then I saw him and I knew by the position of his legs that he was dead. I still shouted out and ran to him but he was completely still.

We’ve been conscious for a long time that Sam is getting old and his time with us could be limited. Everytime he was slow to come out of his kennel on cold mornings, I used to think the worst for a split second. I always thought I’d be quite accepting of it whenever he died, that I’d prefer for him to have quality of life rather than a longer life but be in discomfort. But as I sat down beside him, and leaned over his body, and stroked his soft fur, I sobbed and sobbed. I rang Brian but it went to voicemail. I phoned Will and he said later that he knew the second he answered that someone had died. He and Kate drove up in the tractor, calling in to tell Brian on the way. After crying over Sam’s body for a few minutes, we lifted him into the loader bucket to bring him home.

We buried him on Thursday on a bed of straw, with a bread roll (he loved bread) and a bunch of bluebells. Although we miss him so much, we’re grateful he was part of our family for 14 years. While I wish I had put him in his kennel last Tuesday evening, or I’d walked up to the top farm, I’m also so thankful that his body wasn’t mangled by the loader, that he took a hit to his back leg and abdominal area without breaking the skin and died hopefully fairly instantly, that he hadn’t been in pain and us having to wait for the vet to put him down.  I miss him every morning when I’d normally let him out of his kennel, I miss falling over him at the back door and he waking up with a start, I miss him coming into the parlour expecting a rub down. Rest in peace, old fella, hope you’re enjoying the happy hunting grounds running alongside a yellow loader.

5 thoughts on “In Memory of Sam”