I headed to Tullamore Show last week, armed with copies of Would You Marry A Farmer?, sharing a stand with Oonagh Monahan, author of Money for Jam and being part of the Business Action Group, I was wondering what to expect in terms of sales. The tent was positioned in the top left corner of the field, good in one way but a long way from the stands at the other end! What became evident was people didn’t want to buy things early in the day and carry them around. Quite a few said they would come back but with the heavy showers in the latter part of the afternoon, the final downpour at 4:30 just killed it and people headed for the car parks. 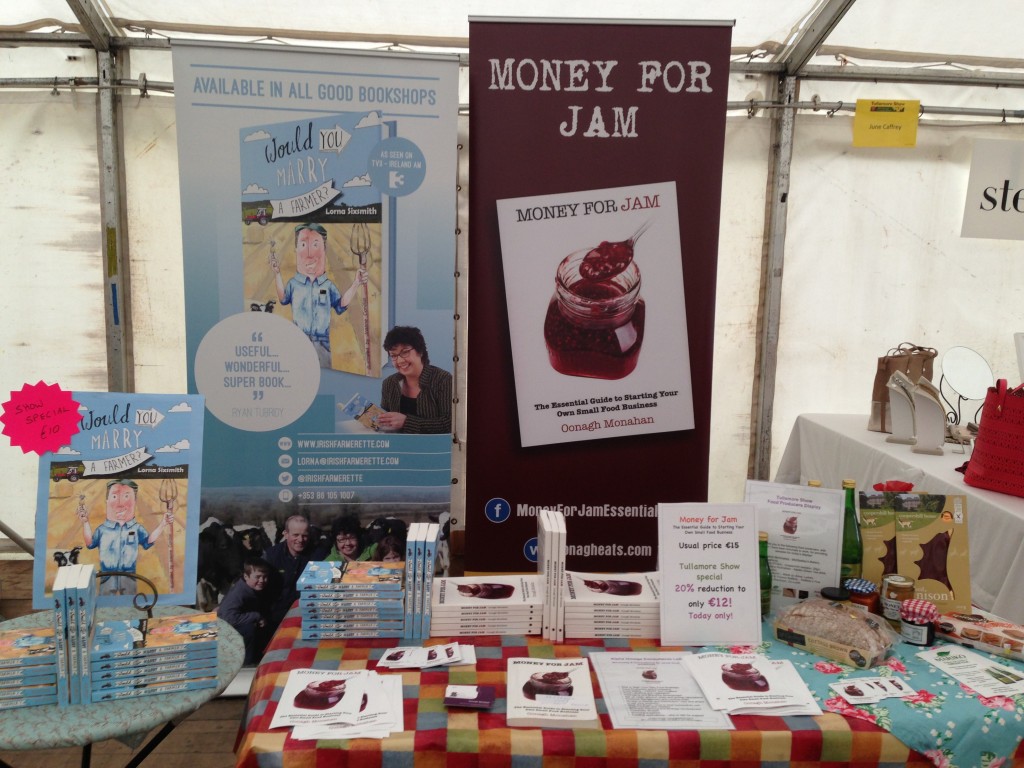 I loved the reaction of my first purchaser, a couple came along and noticed the book. She picked it up and said ‘I’ve heard of this book, I’ll take one’. She turned to her husband and said ‘cough up’. All we could do was laugh as he was stunned and replied ‘Do you really want one?’ and her nod just said ‘You bet, I married you didn’t I?, I want to have something to help me through it!’ ?Hilarious.

As people read the title of the book, it got a reaction every time – the reactions varied but there was always a reaction.

I sold 44 copies. While some people who had never heard of the book stopped to find out more and bought copies, there were many who had seen me on TV or heard me on the radio or read this blog that came to buy it. I didn’t have to convert them to sales at all, they just picked up the book, had a quick flick through, had a chat with me about farming life as they looked for the money and I signed their copy and off they went. It just proved the value of social media to me.

What bemused me somewhat were the number of people who were laughing out loud as they skimmed through the book and yet put it down and walked away! I was amused though at one couple – the gentleman was reading extracts aloud and was laughing heartily while his female partner didn’t find it at all funny.

Tullamore Show is the biggest one day show and attracts about 60,000 people each year. There’s lots of cattle judging – almost every breed imaginable. The ground was very soft underfoot after all the rain for the previous two days so the ground was getting churned up and traffic was having to slow down creating traffic delays for competitors. Cattle trailers were arriving and cattle were being unloaded and hurried over to be power hosed. This is how it is done! 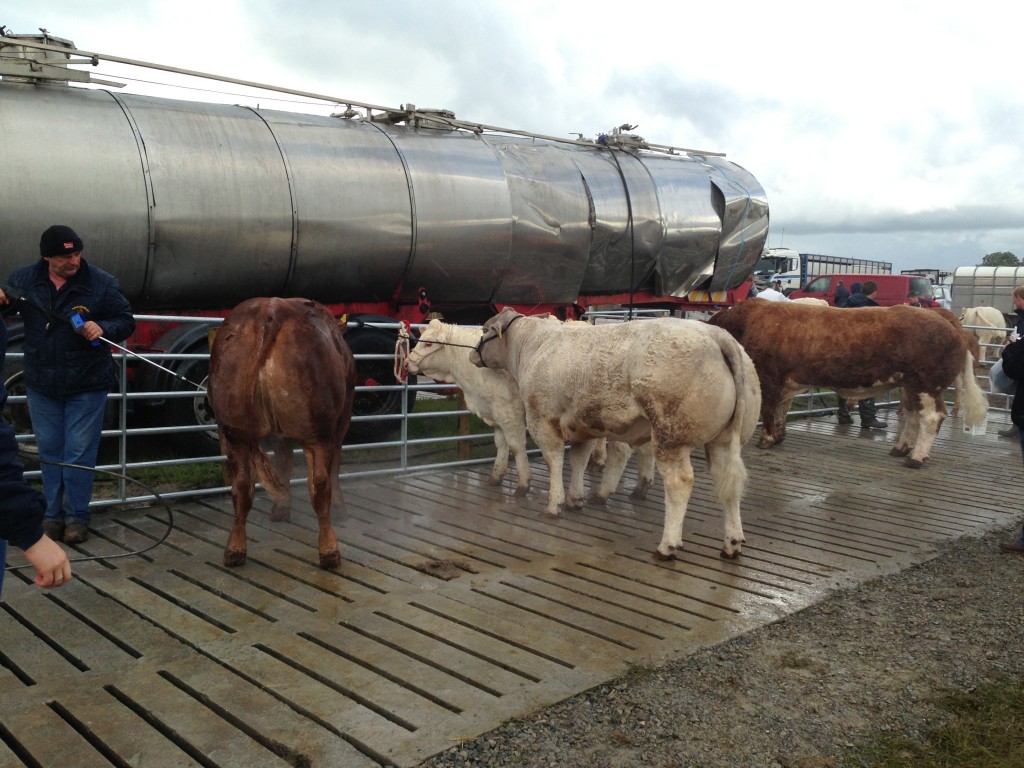 The future of females in farming is alive as well. I didn’t get to meet Catherina of Derrybrack Aubracs as we missed each other – she came to my stand when I was off having a look around and looking for her but here is a teenager who is incredibly enthusiastic about her favourite breed of Aubracs and really wants to continue farming. 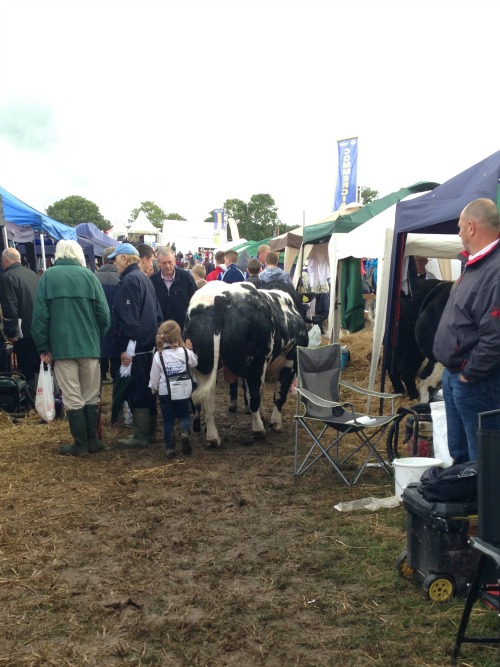 When I was walking along through the cattle judging, I was amazed to see a girl aged about 8 leading a Belgian Blue bull out of the ring. You see young kids showing calves but to see her leading a massive bull took my breath away. As she led him back to his stall, I noticed her two little sisters walking the other side of the bull, both dressed in white shirts and navy ties, the father following along behind. As they got back and the 8 year old tied him up, the other two were busy getting out curry combs and other implements and I overheard the father compliment them on their hard work. To see three such young girls so fearless and so enthusiastic around this huge bull left me with mixed feelings. I have to admit I knew in my heart of hearts I would never let my kids near a bull though – it’s probably because we have Friesian bulls, I was brought up with Friesians and it has long been in my mentality that all bulls should be respected and feared. Although this was a quieter beef breed, well trained, extremely placid, I was also aware that if he was startled and kicked out or headbutted one of those children, it would not be pretty. Maybe I’ve also become more sensitive given the number of farm deaths recently and of course, there’s the fact that I’m an over protective mum! ?But despite my fears, I admired these children and their dad, wonderful to see three little girls being so enthusiastic. The future of farming is safe and well when you see kids like that. 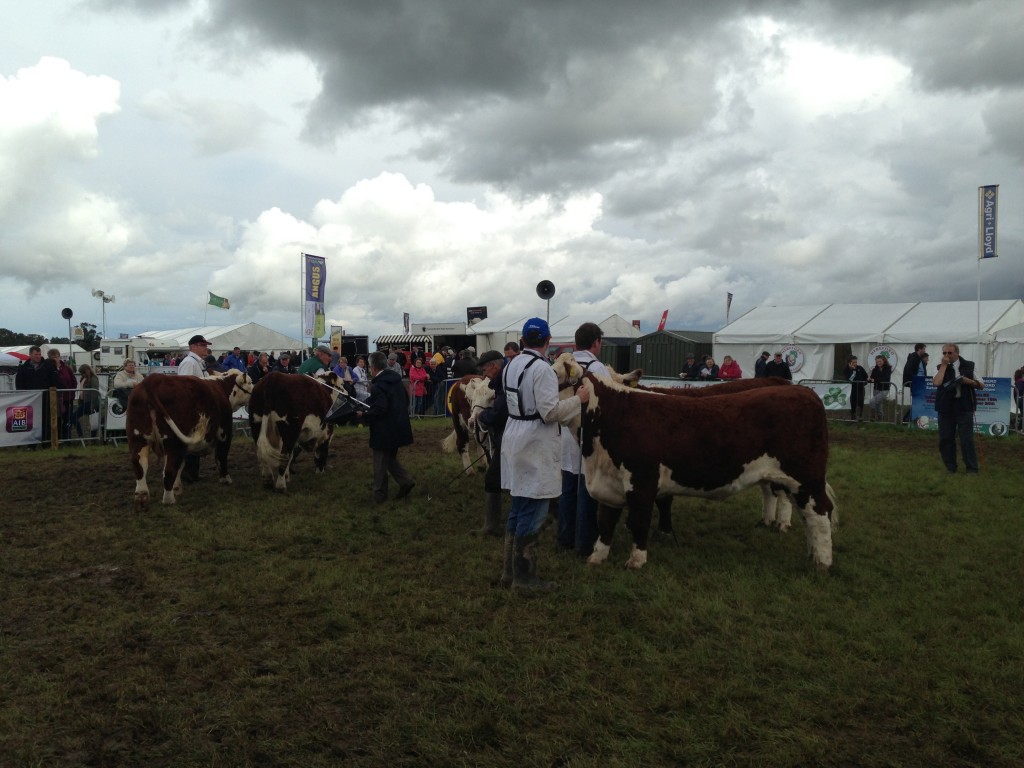 I didn’t make it into the competitive tents – partly due to having the stand and partly because people were sheltering in the tents as it was raining when I was out on one tour around and I couldn’t face the crowds! It’s always good though. What was a bit of a disappointment was the quality of the food tents. I think I noticed it more as I was contrasting it with Nantwich Show where although there were chip vans etc, there was also an emphasis on good food, plus the Good Food Ireland experience at the Golden Shears just blew me away. ?Considering there are usually food demos at these shows, it seems pointless to have food enthusiasts there watching and then not offer them stands where they can buy the best of Irish Foods. I know the shows have to make money but surely people could be offered the choice and perhaps Bord Bia could supplement the cost of the Good Food Ireland food stands. Let’s support good Irish food producers instead of the American franchises. I hate seeing Mr Whippy’s at these shows. Nantwich only had Farmhouse Icecream stands and I still haven’t tasted a nicer icecream since I had Will Taylor’s icecream at the Golden Shears.

To be fair though, the shows do have good food on display, there are small food producers selling food but when you see some foodies complaining that they can’t find any at the Ploughing, you know there is something wrong. They need to be given more prominence and more visibility. I know Aldi showcased all their food producers and it was done very well but I bet they all had to invest in being there. ?It’s just the emphasis on American (or Irish) burger and chips vans and Mr Whippy doesn’t seem right.

I’m sure the food demo chefs would give a shoutout then to the good food producers and use their produce within their dishes. I hope to goodness none of them would do what I am hereafter going to refer to as the ‘James Martin faux pas’ – at least I hope it was a faux pas and not a deliberate error. I rarely sit to watch food demos but I was sitting near the PA guys at Nantwich waiting for my iphone to charge and watching James Martin – he is obviously very popular as well as being a talented chef. Bear in mind that we were at the International Cheese Awards, in the ?corner of a colossal marquee with something like 4,000 cheeses. Surely his researcher could have sourced a British soft cheese from the competition for their recipe but no, he used Philadelphia cheese! What a faux pas!

Toilets are also a hugely important issue at these shows. The individual portaloos are beyond disgusting and I end up drinking nothing after mid-day as I just don’t want to have to visit them again. At last year’s Ploughing Championships, there were the ‘Harpic Loos’, normal cubicles, cleaned regularly, hot running water, normal sinks, soap, paper towel – they were the talking point of the show. Why on earth the marketing department for Harpic hadn’t come up with a hashtag like #harpicloos I have no idea because it really would have spread the word. I really hope they are back there this year and I wish every show would have the Harpic Loos or similar.

I did have a great day though. I’m not the best at selling in person – give me online any day but I enjoyed the interaction, it was fun hearing what people thought of the book and watching their reactions too. I’m off to the Tullow Show on Sunday, not to sell books, just to enjoy it. The Virginia Show in Cavan is on next Wednesday too but it’s a long way! ?It was cool to see someone review my book in the Carlow Nationalist last week as a precursor to looking for a farmer at the local Tullow Show! 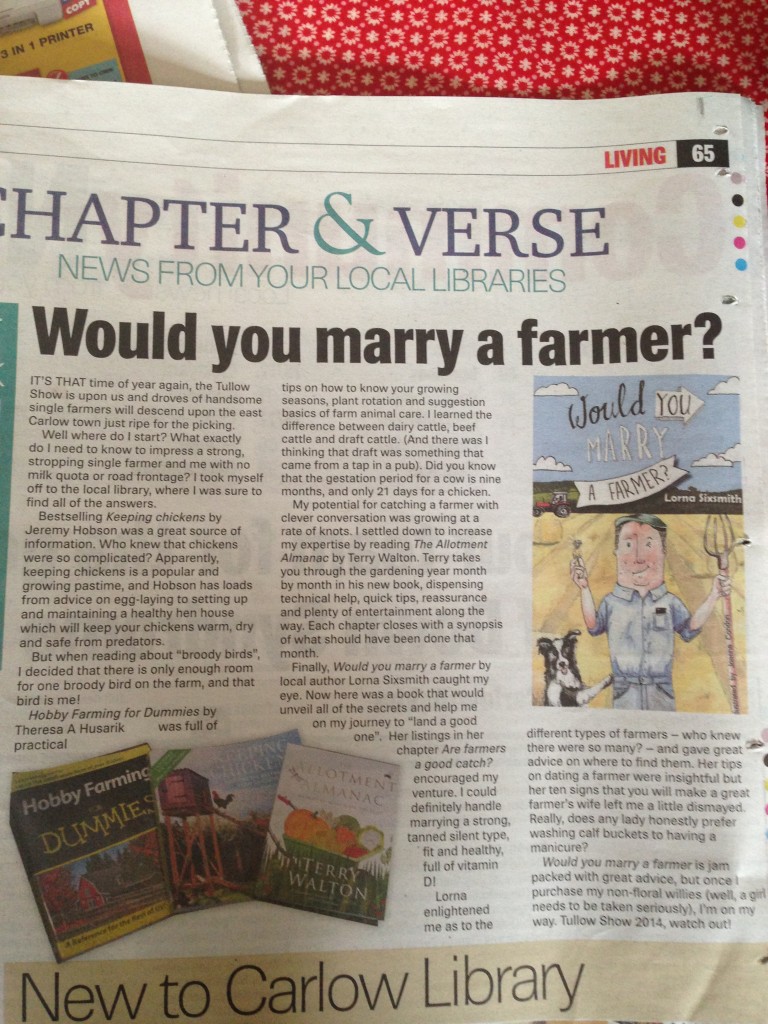 I’m going to be at the Ploughing Championships 23rd – 25th September in the Laois LEO tent and signing copies at Lisdoonvarna on 20th and 27th. I reckon I will have to do another print run which is wonderful in one way but also scary!