Irish Water has been in the news quite a lot lately but it’s not that long since water was a very popular topic in rural areas. We don’t have piped water in a couple of the calf sheds and as I’ve been carrying buckets of water to them, I started thinking about how it’s not all that long since farm women had to carry buckets of water to the house every day of the year – water for making tea, water for cooking, water for washing dishes and clothes, water for drinking, water for washing themselves – that’s a lot of water! Some houses didn’t even have piped water as late as the 1970s and there were many that even though they got water piped to a kitchen sink, the bathrooms came decades later.

When living in Salisbury, we bought a Victorian house in 2000 that had been previously owned by a single elderly gentleman. He had put a basic bathroom into one of the bedrooms but the bath was still in the kitchen – albeit with a type of lid / seat. Then in 2001, we bought a house to renovate and I couldn’t believe it when we viewed it. Bear in mind that this was a small city, not stuck miles out into the country. The previous occupants had been renting it for half a century and very little had been done to modernise it. The kitchen had a large sink and yes, a bath with a lid on it. The toilet was in an outbuilding in the garden. Luckily enough with that purchase, we could afford to stay living in our existing house while we renovated the bathroom-less house so didn’t have to slum it. 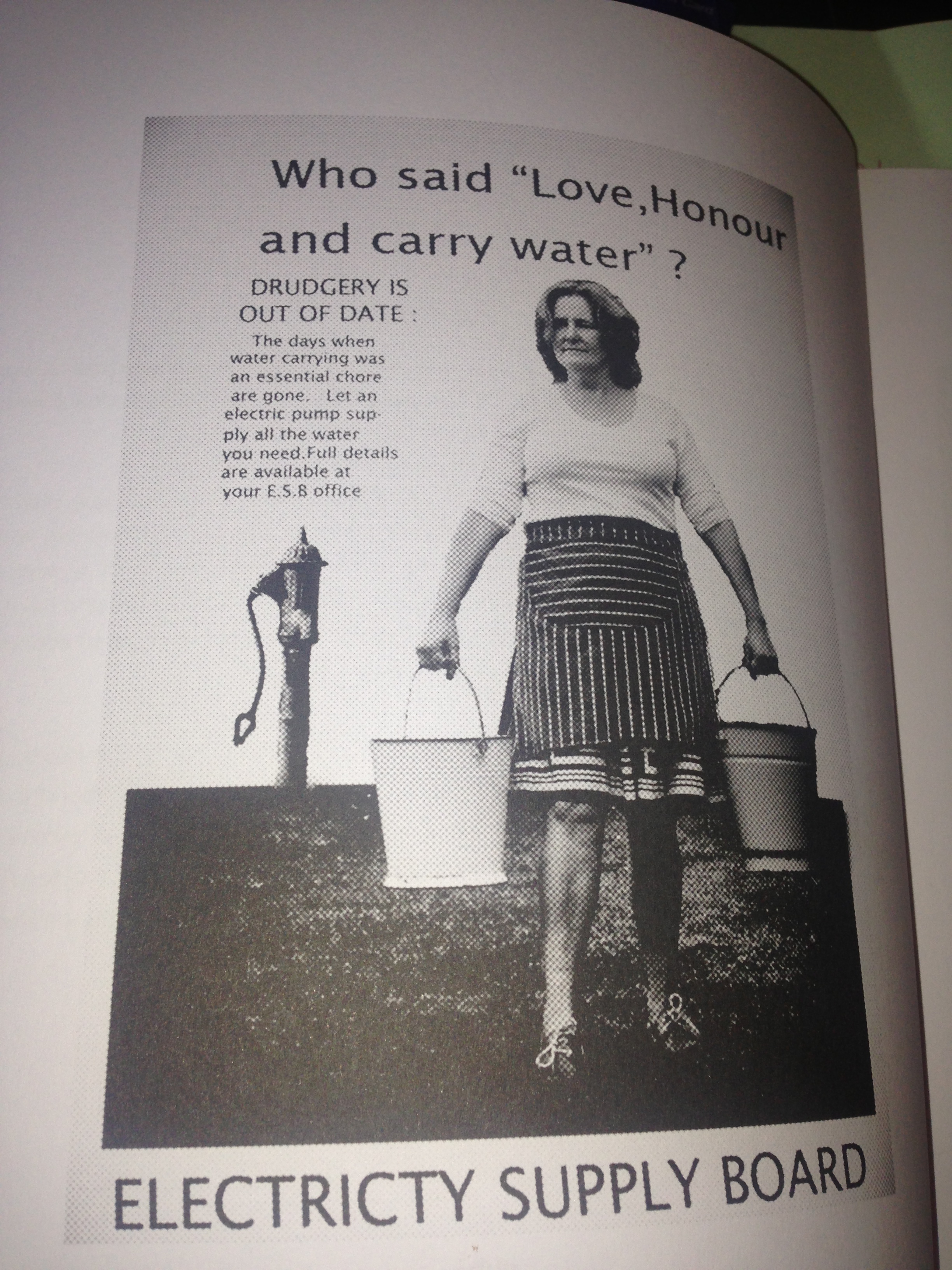 The reluctance to install piped water in the 1960s caused much angst. The Dept of Agriculture was offering a cash grant from 1954, the grant covered half the total cost of getting an electric pressure storage pump and piping to a maximum of £100. The ICA ran a campaign to promote the installation of electricity and piped water – even putting out a rumour that no woman would marry a farmer if there wasn’t running water in the house. Given the concern about the number of ageing bachelor farmers in Ireland during the 1950s and 1960s, I guess they thought it would work. However, many farmers were reluctant to put in piped water believing it would add value to the farmhouse and increase their rates. Many had got in electricity so they could move on from hand milking cows but as the farm wife and children carried the buckets of milk, they didn’t see it as so important.

On this farm, they got electricity in very early, in the late 1940s as there was a supply nearby for the coalmines. Water came off the hill to a tap outside the house and that sufficed until 1964 when the house eventually had a bathroom and piped water installed! My parents got married in 1965.My maternal grandmother was much more progressive. She had water in before they got electricity. A tank was installed in the attic and my grandfather used a petrol pump to pump up water every couple of days, enough to last for the two days. There was many a wife that was accused of being too lazy to carry water (by her in laws) when she got water installed into the house. No wonder my mum was the talk of the county when she got a dishwasher installed in the 1970s!

This farmer’s wife remembers how they dreaded fetching water and what a difference having piped water and electricity has meant to her life. Admittedly, it is written somewhat like an advertorial but the contrast is clear.

What had I hated most? Was it the groping for the matches when you awoke, the feeble light of the candle before you got the lamp lit downstairs or the torture of having to wait for the fire to catch to get a cup of tea?

Putting a cake in the range with its unreliable oven was like putting a bet on a horse, you could never be sure of the result.

We hated fetching water. I can remember coming in from school and seeing the row of upturned buckets on the stool inside the back door, a mute reminder that they had to be filled before tea. There was the chill of the water as it slopped over and trickled down inside your wellington, the ache in your arms despite shifting the bucket from right to left and the sinking feeling when you were told after struggling home, to run off now, and get another.

It’s not all that long ago since farm women had to carry numerous buckets of water – it certainly makes me enjoy a hot shower all the more!