We bought a Hereford bull last week. Not overly exciting news but what was amusing (and of some concern initially) was his reaction to the Friesian cows. 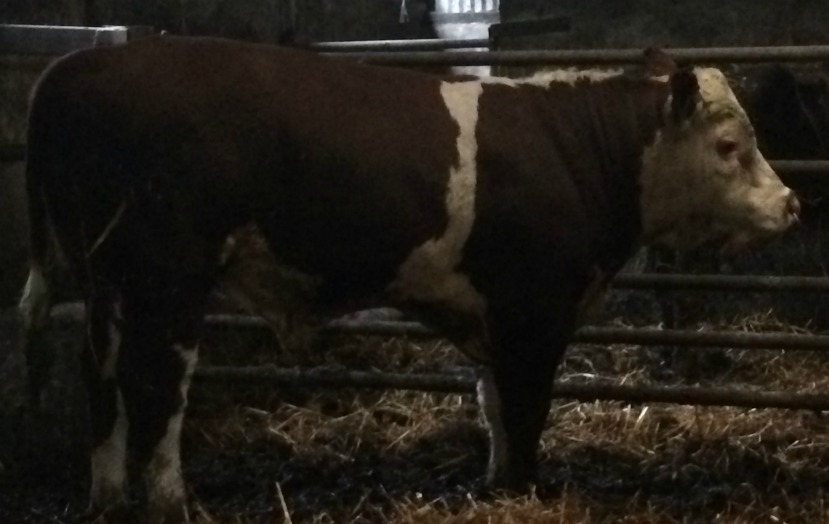 In typical fashion, we were a bit late buying him in that we should have gone to look at bulls two weeks previously so he’d have time to settle in to his new surroundings before being needed for action. As it happened, we went to see him the Tuesday after the bank holiday and it was a glorious sunny day so after agreeing on the purchase, we drove the extra few miles to the beach for a pub lunch and a walk by the sea.

So, we decided to acclimatise him gently and he was introduced to a black and white cow the next morning. He might as well have been placed beside a stone pillar for all the attention he gave her, or rather, he was aware of her but he was cowering at the other side of the fairly large pen. We knew he had only ever been with red and white herefords so we introduced a dark red Friesian – same response.

Did this mean that he had a problem or did he need more time to settle in? It’s about 12 years since we last bought in a bull but couldn’t remember any delays with his vigour. Since then, we’ve used our own Friesian stock bulls “to clean up” (which means to inseminate any that weren’t impregnated by artificial insemination) and they’d mount anything! Of course, we needed him to get to work as we want these cows to have calves in 9 months time. Cows go on heat once every 3 weeks and according to Teagasc, every missed heat (if you don’t pick up that they are on heat or if they fail to become pregnant) costs about £250 between loss of milk and calf progress.

We had decided to get a Hereford bull to use on cows that we’re not overly bothered about getting replacement heifers from (we use Artificial Insemination from high EBI bulls on cows we want replacement heifers from, heifers that will be better than their mothers in terms of producing good quality milk and will either go into our herd or we’ll sell them at a year old to other dairy farmers) and to use on cows that calved late. The reason for the latter is that it can be harder to get a cow pregnant with an AI straw than a bull so if her fertility is that bit lower (as suggested by the late calving) then there’s a higher chance of getting her back on track and ensuring her longevity in the herd.

Back to the bull’s progress – or lack of it. We have a couple of Hereford cross Friesian heifers so we got them in the next morning and he showed huge interest in a black and white one and yes, lost his virginity. We were half way there – even though she had the markings of a Hereford, she was black and white so fingers crossed.

A black and white Friesian was let in to him and I had to laugh when I checked on their progress. She was standing there looking at me with large doleful eyes as if to say “I’ve tried everything. I’ve fluttered my eyelashes. I’ve wiggled my behind. I’m standing still – what more do I have to do to tempt this fine fellow.” She was clearly frustrated and annoyed and he was oblivious to her needs.

By the way, it’s very easy to feel like a nosy peeping Tom when you’re trying to keep an eye on what is going on. You don’t want to distract him and yet you want to know if he did the deed or not – especially as it can all happen very quickly!

The next morning a red and white Friesian was on heat and he was very receptive. He ignored the black ones and Rua felt very special indeed! 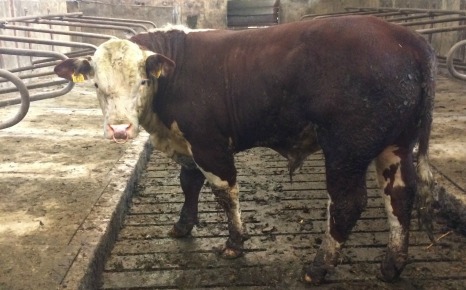 And the good news is when a black and white Friesian was let to him next, he acted like you’d expect. So it’s all good. We can name him! We’ve opted for Flash Gordon because of the stripe on his side.

We’ve used Hereford straws in the past and had 6-10 Hereford cross Friesian calves each year for two years. I like them, they have lively personalities and are strong calves – if a little too headstrong sometimes! Flash is polled so that means that his offspring won’t need to be dehorned – another job saved next spring which is important at busy times.