Hello, my name is Maggie Moo and I am the first calf to be born at Garrendenny in 2014. I’ve been chosen by the farmers to be their blogging calf and tell you all about life here on an Irish dairy farm as I grow into a yearling and then move into the milking herd in two years time. 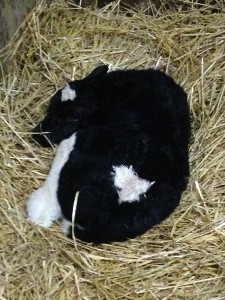 It’s pretty busy here, there are new calves coming into the calf shed every day though I’ve heard the farmers say it will get much busier next week. It’s good to have so many other calves in with me, we’ve been making friends and getting to know each other. Do you see that calf with a white head and black circles around his eyes? He is called Buster and I heard the farmerette* say that he is a greedy sod already, only a couple of days old and trying to push others away from their buckets when he has finished his milk. ?Some of them are so little they can barely reach the bucket and she has to hold it up for them. ?The newborns get really thick yellow milk when they are born and for a few days – it is called colostrum and is full of good things that keep us healthy and stop us getting bugs that would make us sick. I heard the farmerette say that her great granny used to love to make pancakes from the colostrum but she said it would be too strong for them. I wonder if it is good for humans. 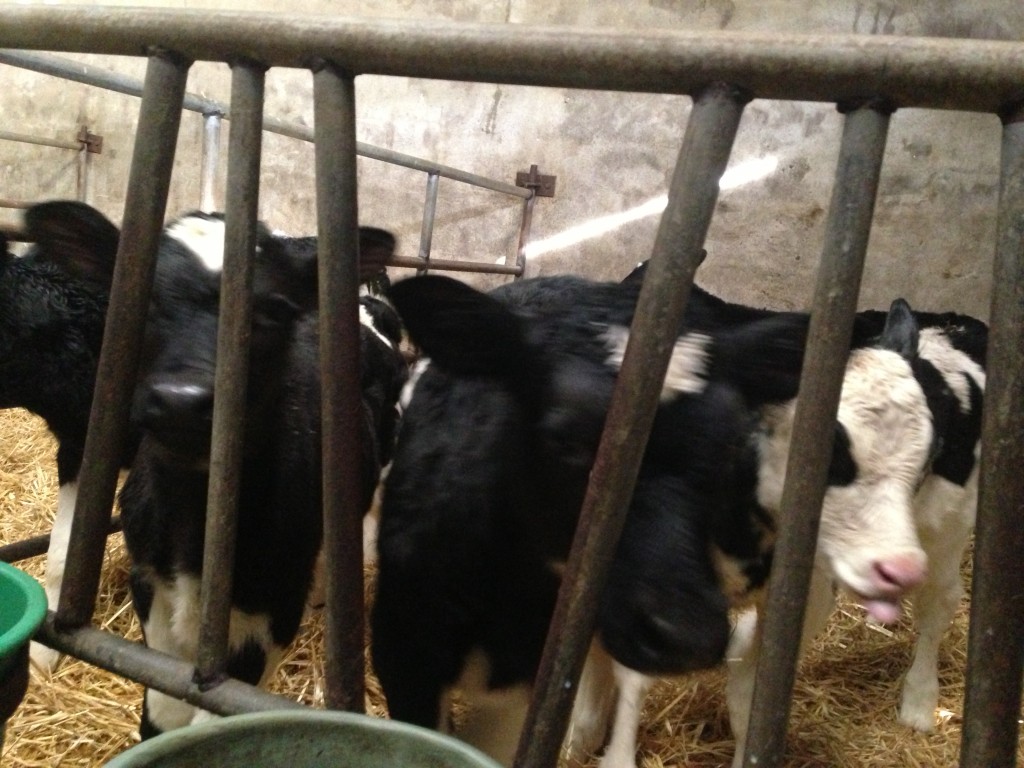 It is nice and warm here in the straw, I can hear something howling outside. When I was being moved across to here, wet stuff was falling on me, it is called rain and there has been too much of it lately according to the farmer. He is sick of the wind and rain and it is making him busier. We all sleep a lot. We get lovely warm milk twice a day and then we sleep for a while. Sometimes we wake and go for a frolic around in the straw. When we get a bit bigger, we will go into a bigger shed and have more room to run around. I’m looking forward to the weather getting warm when we can get to the fields and eat the sweet green grass.

The farmer was delighted I was a girl calf, especially as I was the first one. As we are a dairy breed, they seem to prefer girls. ?The farmer says we all have a score called an EBI (Economic Breeding Index) and he is trying to improve the overall EBI of the herd. Some of us will go into the milking herd here and some will be sold to other farmers when we are two. I hope I get to stay here.

I won’t see much of my mum for a while but I will see her sometimes when we are out in the fields. I’m looking forward to that. ?She was a lucky calf too. She was telling me that on the night she was born, the farmer was really busy as lots of calves had been born. Her mum was a heifer too (having her first calf) and although she was in one of the two maternity wards, she hadn’t been moved down to the labour unit. There were lots of calves being born and after delivering two, he did a quick check around and discovered that my mum had been born, all on her own even though she was coming backwards (feet first rather than head first) – he was so delighted she was okay and a girl especially as first time calvers often need some help – let alone when they are giving birth to a ‘backwards’ calf.

There was a boy calf born the other night and he wasn’t breathing when he was born, it was a tough birth and his mum was overdue by a week. ?They had to use a pulley to get him out. As he wasn’t breathing, they hung his back leg over a gate to get rid of all the fluid and tickled his nose with straw to see if that would get him breathing. They then had to lay him down on the ground and while the farmer gave him mouth-to-mouth, the farmerette was rubbing hard on his lungs and heart. He started breathing and after 24 hours under an infra-red lamp, he is doing really well. Not jumping around yet but drinking and looking perky. 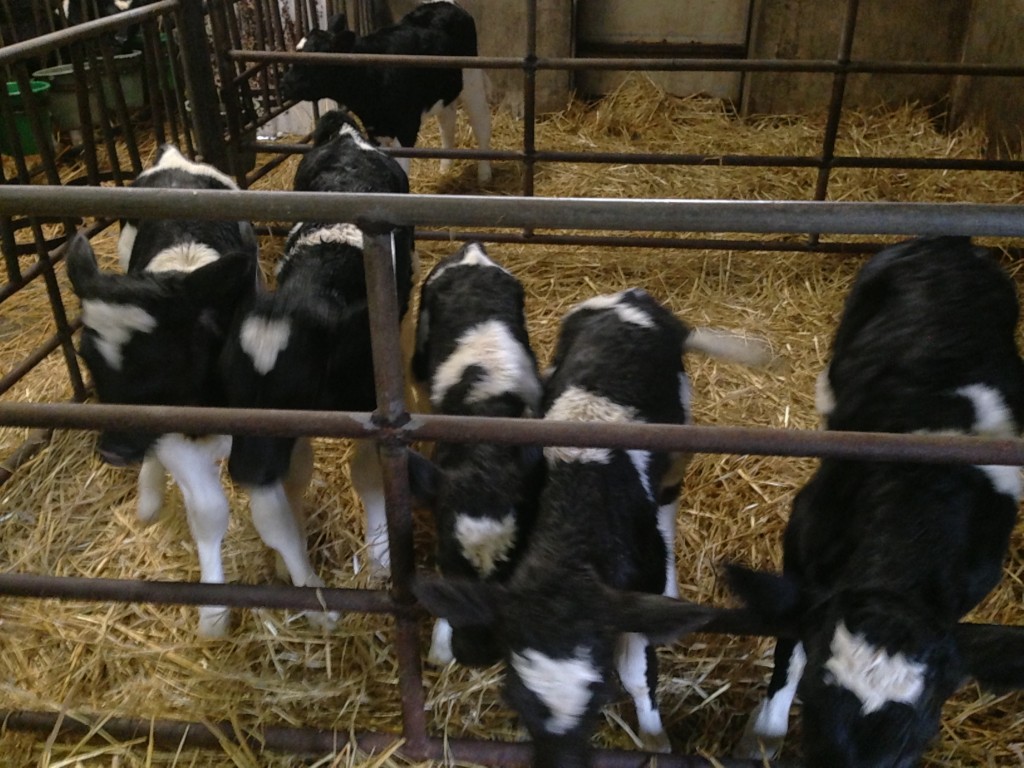 My two best friends so far are tiny twin heifers – they are so much smaller than the rest of us. As the farmer said, the two together would make one calf. They are called Sugar and Spice and are in the next pen to me.

We are fed milk in buckets in this shed. Some of the sheds are set up for teat feeders and the younger calves will go into them. It can be a bit tricky to learn how to drink the milk. Apparently human babies find it tricky too. We drink the first colostrum from our mums first and then our mums go across to the milking herd to be milked by the machine. They give 5 or 6 gallons a day at this time of year and we only drink about a gallon a day so our dairy mums would give enough milk for 5 calves. Suckler cows don’t give as much milk but their calves are beefier and they stay with their mum until they are weaned.

To teach us how to milk, the farmerette splashes milk into my mouth so I get a taste for it, she then put her hand into the milk and puts her finger in my mouth, once I am sucking on it she guides my head down to the milk and once I’m drinking the milk, she takes her hand away. It usually just takes one go and then the next time, we are able to drink the milk on our own. It can sometimes take a lot of time to teach a lot of newborn calves to drink. 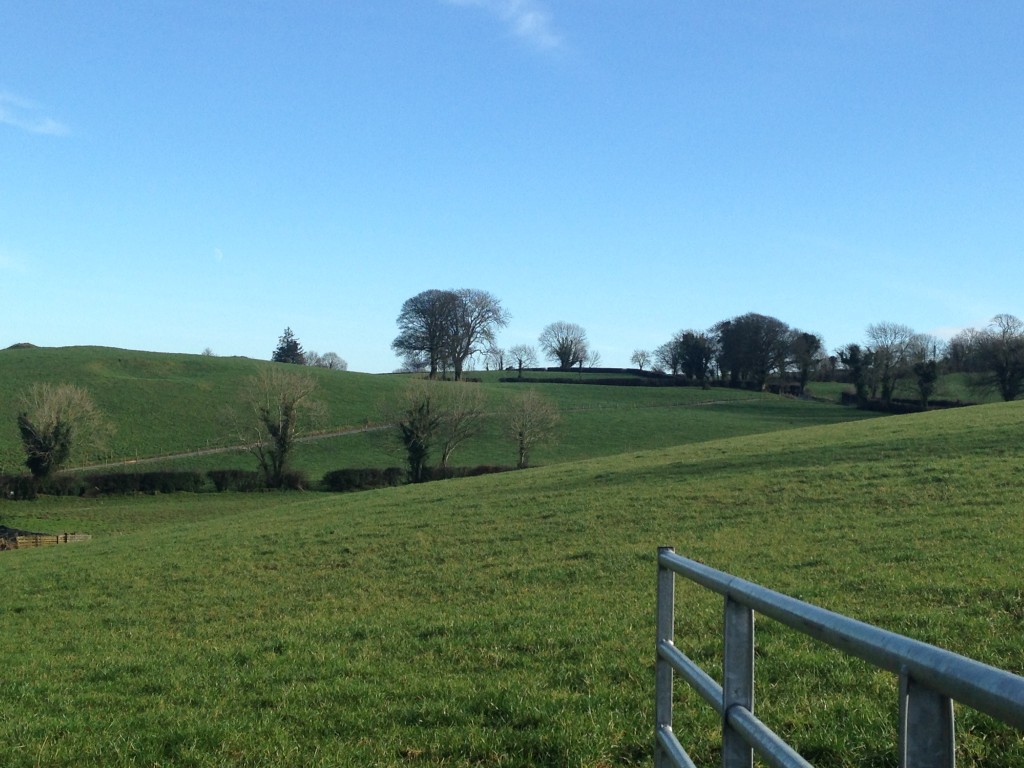 I’ll leave you with a photo of our farm. If you have any questions – do ask and I’ll answer them in my next post,? 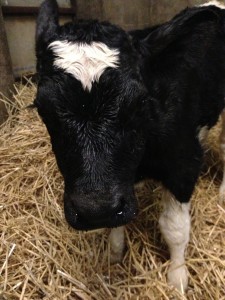 If you would like to subscribe to our newsletter or to ensure you get all our posts, do fill in the relevant boxes in the right sidebar 🙂

*Calling her farmerette to differentiate her from the farmer – she doesn’t like the term ‘farm wife’.

5 thoughts on “Maggie Moo – the Blogging Calf from Ireland”