It’s Maggie Moo here again – did you know it was my birthday recently? I’m a year old now and in a year’s time I’ll be having my first calf! 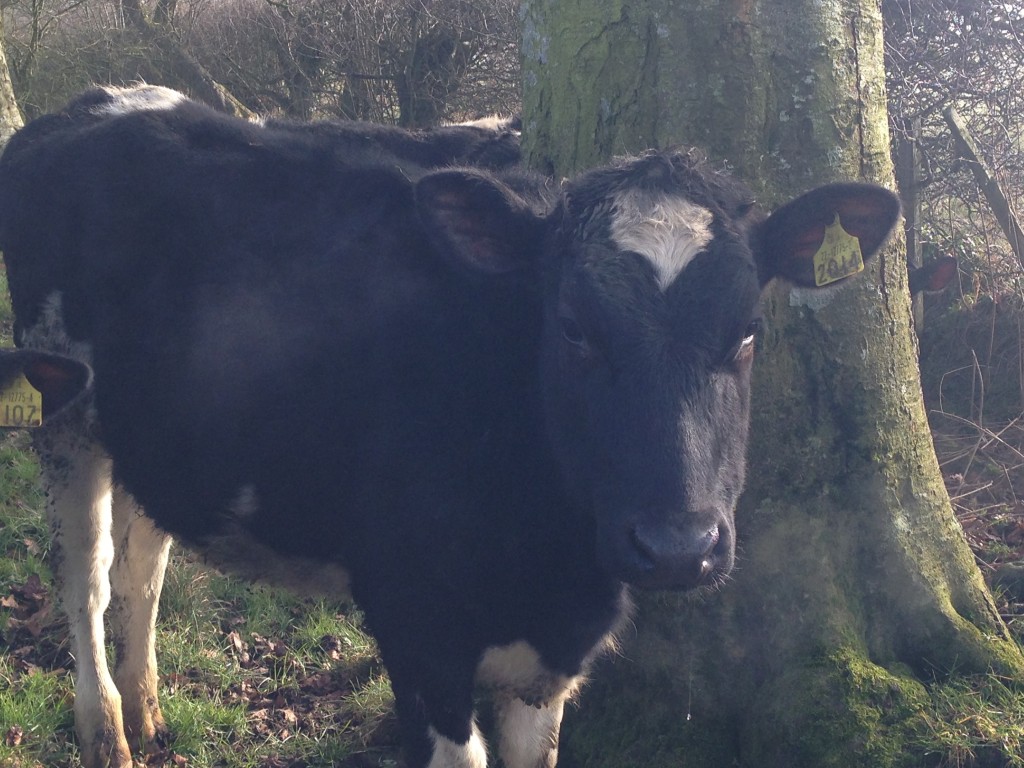 All the yearlings are over on the outfarm, we are in a huge red roofed shed, the bullocks in one half and the heifers in the other. We have cubicles to lie down on and quite tasty silage to eat. We see one of the farmers each day when they come over to check on us and move the feed barriers so we can reach the silage. 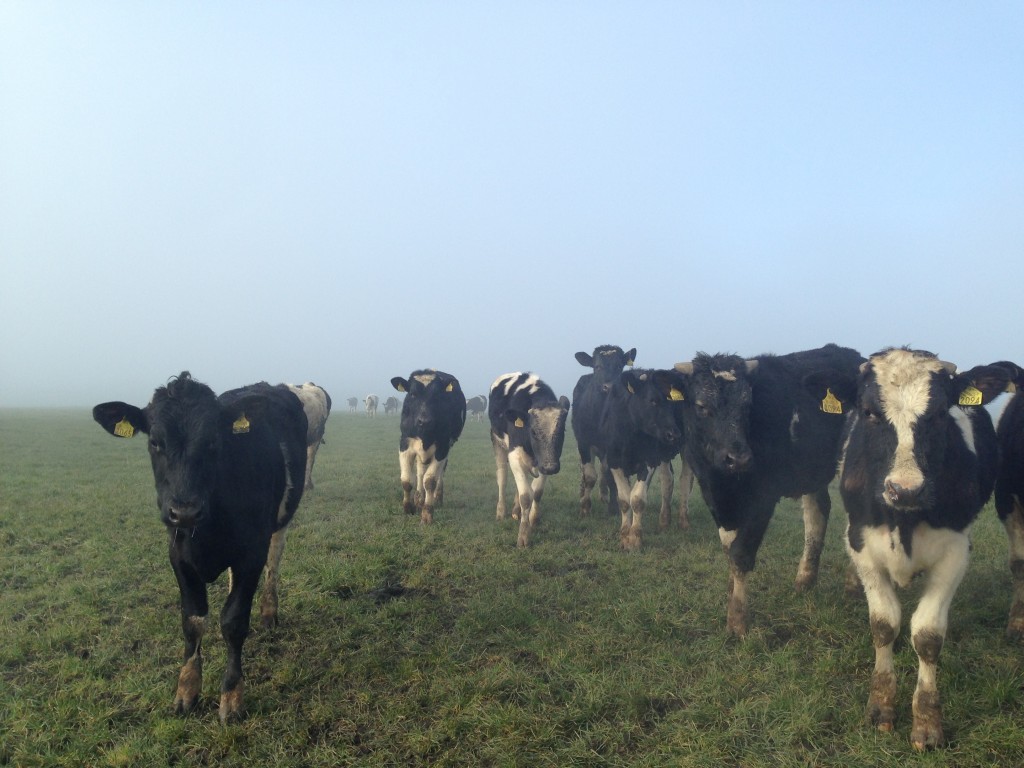 We did get out to the field for a good week, the weather was cold but really sunny. The mornings were misty but brightened up into really warm days. The night frost kept the ground hard so we didn’t do any damage to the grass or ground and my, the grass was really tasty. We had to go back in when the rain came but it was nice when it lasted. It’s supposed to get warm again so if it stays dry, we should get out again. 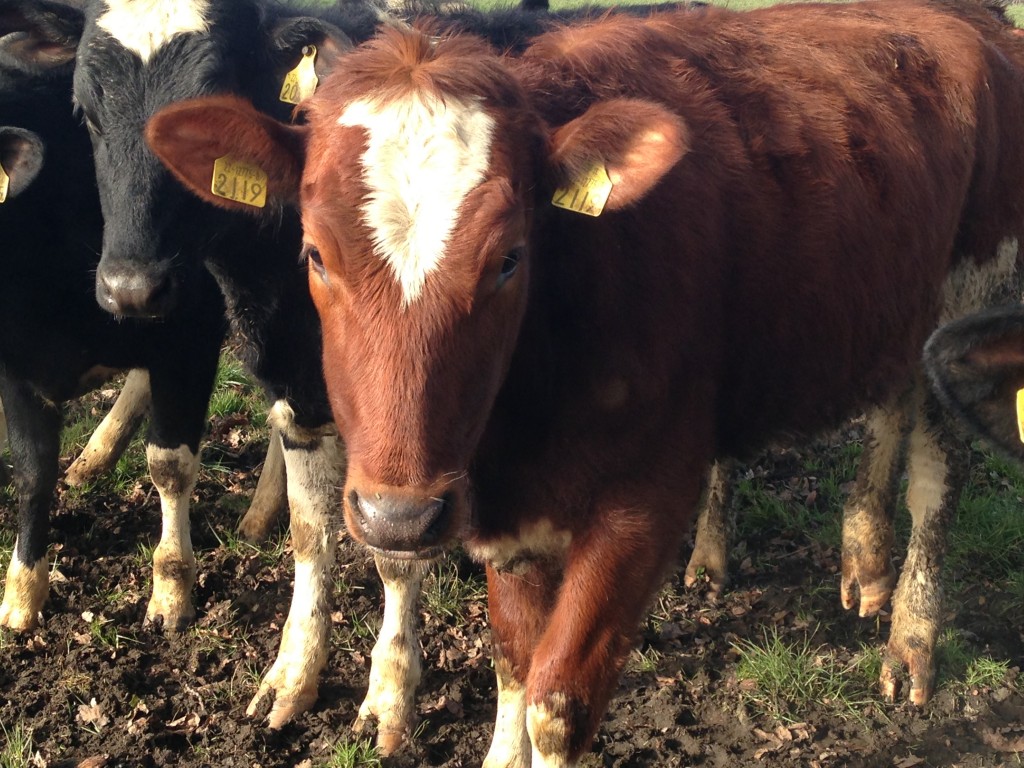 As you can see, Pixie Meadow is just as pretty as she was as a tiny calf. The red colouring is so pretty and it seems more so as most of us are black and white. 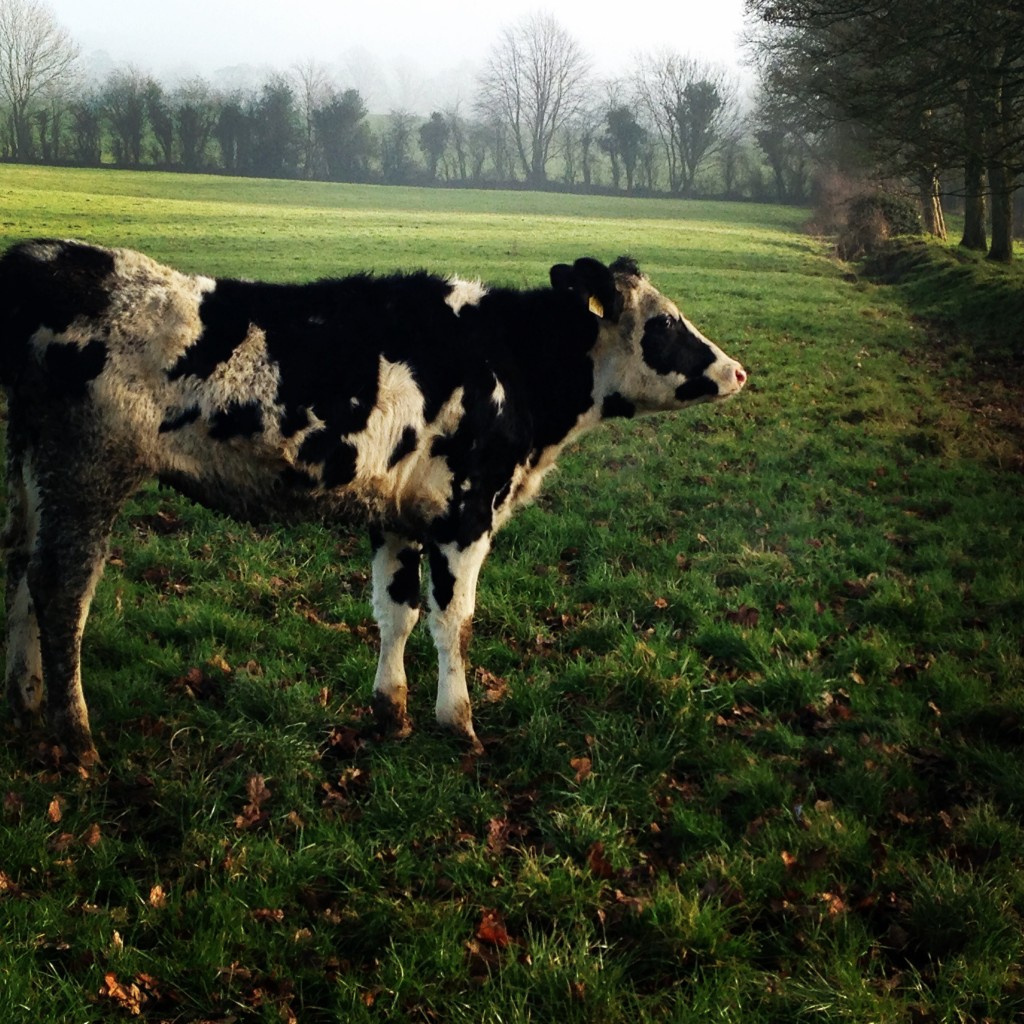 Here’s Florence having a stretch. She looks a bit different to the rest of us as she has Oman (a particularly popular AI bull) in her bloodlines and many of his offspring have the dark circles / spoldges in their colouring.

We’ll be heading back to the home farm in May but for now, we’ll be staying here. A neighbour’s young bull broke into us last week so he had to scarper quick as the farmer didn’t want any of us getting pregnant this early. He was probably a bit young but they weren’t taking any chances. ?Florence was on heat but she just laughed at the bull calf and ran away from him. She doesn’t want to get pregnant yet.

There’s lot of calves being born, up to 42 now and all are healthy. My mum had a bull calf and he’s doing well.

There’s two Hereford cross calves so far. With the bull beef crisis last year and factories refusing to take bulls as they wanted smaller cuts plus there is a premium market for Angus and Hereford beef as Aldi and Lidl sell them, lots of farmers were buying Hereford bulls. The farmers here used about ten Hereford straws on cows so it’s interesting to see the white heads with black eyes. So far, a heifer (Henrietta) and a bull (Henry) have been born. 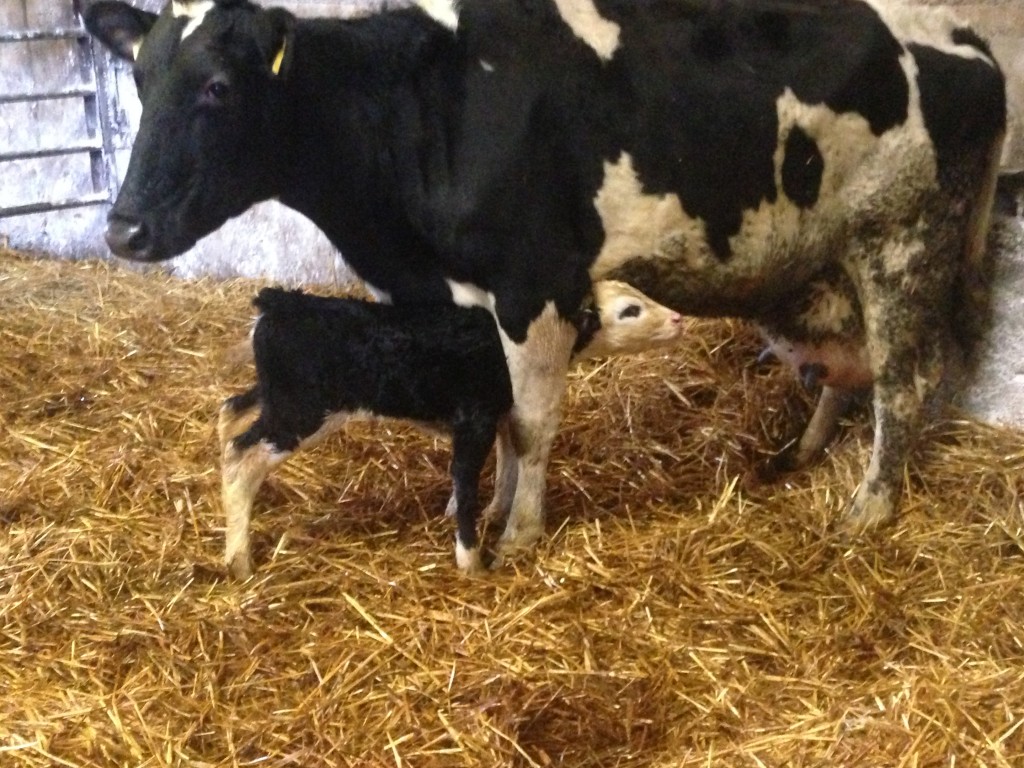 The farmers tried some sexed semen too. They want lots of female calves as we are more valuable than the boys. We don’t eat as much and have a higher value. The farmers were number 13 in the top dairy EBI herds this year which was pretty cool. Each female animal has an EBI score based on her parentage, her fertility and the volume and quality of her milk and all the scores are added up and averaged. Our herd EBI is 207. ?The sexed semen in AI is spun in some way so that it should maximise the chances of female births. So far, five of the sexed semen calves have been born but two of them have been bulls! In general though, there’s more females than males this year so far so they are happy enough. The sexed semen straws cost about ?20 extra so it will be interesting to see how it all pans out in the end. It would be nice to have girls rather than boys for the reason that it would be nice to spend time with daughters when they reach the milking herd.

They always had problems with the milkbar teats in the feeders, we just couldn’t feed from them last year unless they were punctured and then, after a while, the milk flowed out too quickly. We were fed on buckets but this year, the farmer wanted to feed the calves via teats as some calves suck on each other a lot and it isn’t too healthy if they start drinking the urine of a male calf!!

She got a couple of new teat feeders and to her surprise, the calves adjusted really well from bottle to the milkbar teats. She thinks she made it too easy last year by puncturing them and then when she put new teats on the feeder, they weren’t used to having to work hard and gave up. All the calves this year are adjusting really quickly and the farmer says she is now converted to those feeders! She’s feeding them 3 litres each twice a day. Because of the problems with crypto last year which killed some calves, each calf has to be dosed with Halocur one a day for seven days – apparently it is the only thing that will prevent it. Even though the houses are disinfected, it’s really hard to get rid of it. She’s going to get yoghurt too to add it to the milk as an added precaution once numbers increase. 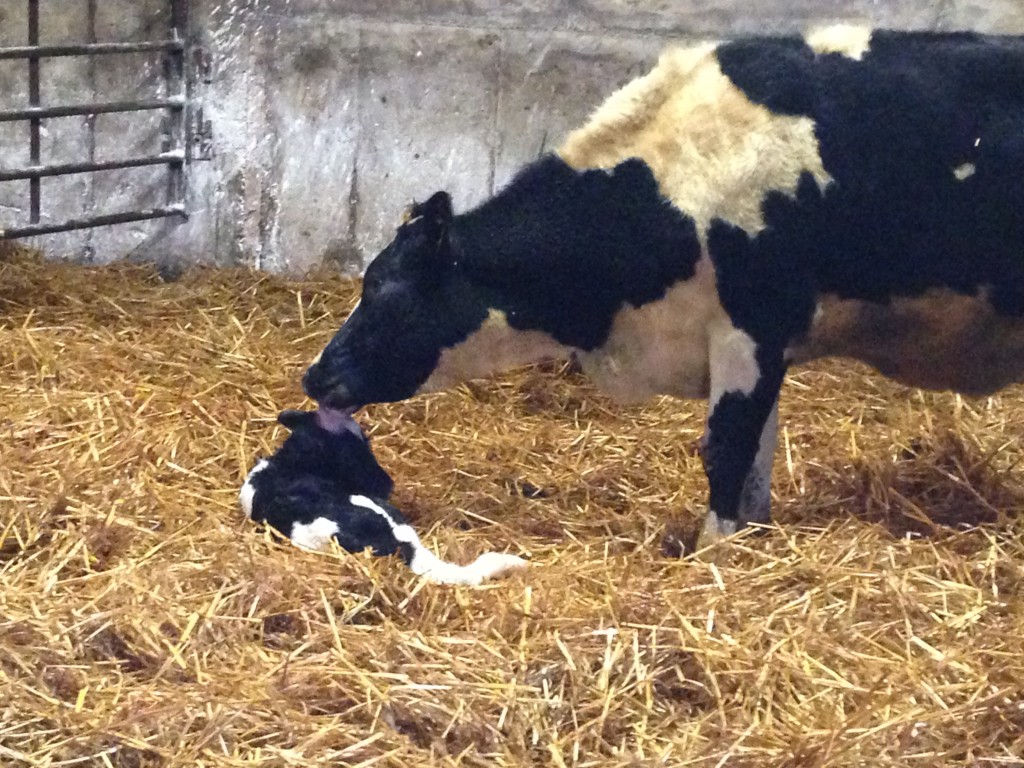 So that’s it! That’s enough excitement for one spring – it will be interesting to see what the later spring brings! I hope we get out to grass again soon. I’ll soon be calfrearing age – imagine!