Neighbourhood watch in farming used to mean that when you got a phone call early in the morning or late at night you were told cattle or sheep were out on the road. Unfortunately, with the increase in rural crime, communities watches are being officially set up all over the place to try and prevent thefts. However, we benefitted from the old type a couple of weeks ago. We’d just let out the 67 yearling heifers and split them into two fields. A lady arrived at our house at 7:30am to say that she thought our cattle were out on the road around the chapel (beside our outfarm 2 miles from the home farm). As we got the dog into the car boot and alerted the children, we received a phone call from a neighbour over there letting us know too. 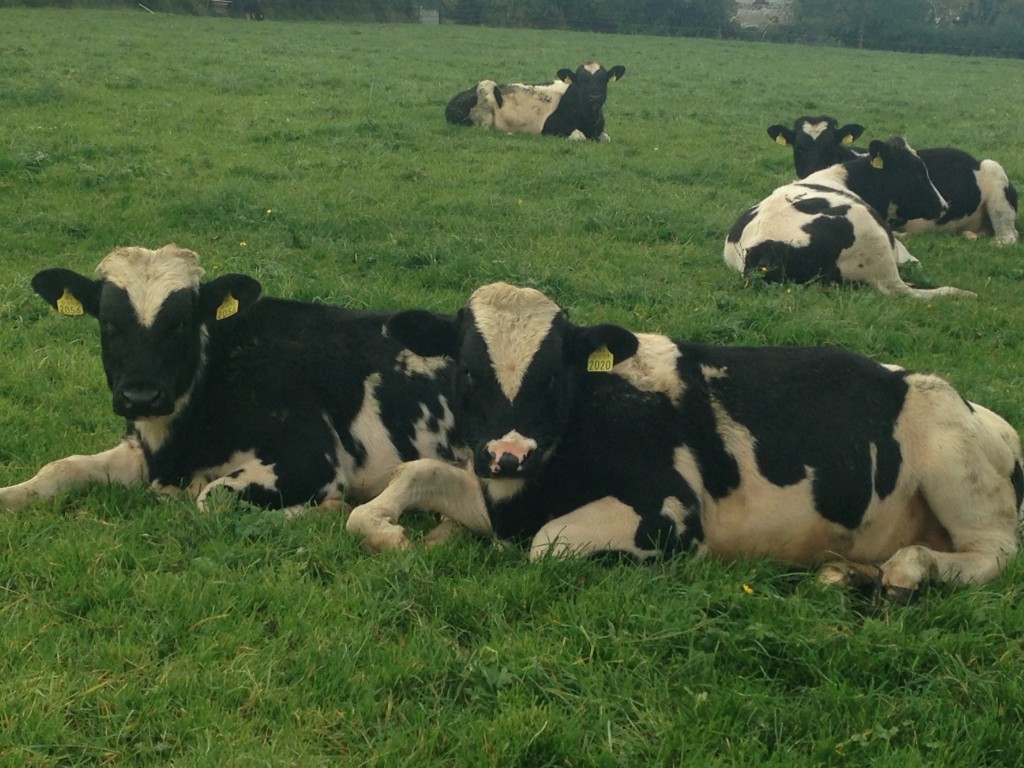 We assumed the heifers on the Chapel Field had found some hole and wormed their way out. We were just passing by the other field and wondering if we should put the escaped ones with the others when we noticed something strange.

The gate was open.

A gate was gone.

There were two small gates joined at the middle in this particular gateway. One of them (the newest one and the only half decent gate on the outfarm) had been stolen. I think our jaws dropped about six inches.

We drove on up the road to be met by a neighbour standing on the road with the heifers standing behind him looking rather bemused. When we told him a gate had been stolen, his jaw dropped and he looked as stunned as we felt.

The heifers were quiet and it was easy enough to get them into another field. The gate must have been stolen some hours previously and the heifers discovered the gap as dawn broke and decided to have a look around.

The strange thing is that although there was a loss of a gate and it was infuriating, all we could feel was relief that the heifers hadn’t been hit by a car, hadn’t been injured, hadn’t travelled far or created havoc anywhere. Not sure if that’s down to farmers looking for the silver lining or just being aware that it could have been much worse. The theft of a gate is one thing, but the theft of a gate when there are livestock in the field is quite another.

Of course, things don’t happen in singles but in threes at the very least! Brian went over to herd the cattle on Saturday and discovered the 43 bullocks to be totally spooked and crammed together in a corner. Most of them came out but 8 seemed determined to stay there so he left well enough alone. On Sunday, he discovered one was missing. I spent an hour looking around neighbouring fields but no sign.

We went over on Monday morning and discovered that he was in a neighbour’s corn field. There is a small copse of trees and scrub in the middle of it and he was standing in it. As we got close, his head went up, his ear perked, his tail was even on high alert as he pranced away down this long, large field. How were we going to get him back? There was no easy route back to our field. Getting him out the main gate would mean walking him along a long road and he wasn’t exactly calm. We wondered if getting a couple of other cattle and putting them with him might calm him down. We followed him down along as he entered another corn field and then with the help of neighbours, he decided to jump a hedge, got caught in brambles and lay entwined above a ditch of flowing water. The poor thing was terrified and yet there was a risk to Brian in case the bullock kicked out when he was being released. We achieved that much without injury anyway and off he ran up the first field again.  I headed to the gate to get the car and Brian went after him.

To cut a long story short, the bullock got out through the ditch onto the road and then into a neighbour’s yard. They got him into a shed and then very kindly, loaded him up in their cattle trailer and we brought him around to the sheds and put him in. He was glad to be back in a place where he recognised and immediately set to eating some silage. 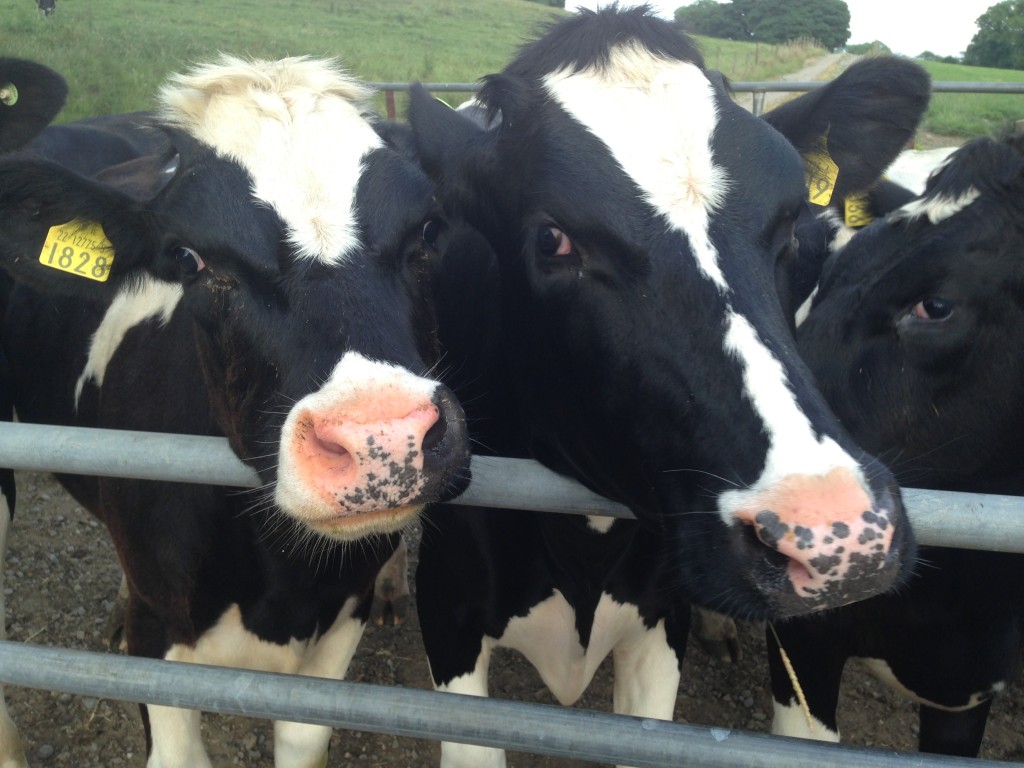 Yes, maddening that this happens, it was probably someone running dogs in the field that spooked them. Dogs aren’t just a danger to sheep. It was only their second day out so the owner of the dogs may not have realised there was stock in there. A busy week on the farm and it took us two and a half hours to get him back!

Our day wasn’t over yet though. We arrived home and Brian went up the yard. I nipped into the house and went up 5 minutes later to be met by him looking a bit pale. We had a bull in a pen near the milking parlour. Last summer, he had hurt his pelvis and since then he’d been on his own, and was due to go to the factory within the next month or so. As there weren’t any cows in the shed that day, Brian had opened the gate to let him go up the slats to get some water and left him there. Somehow, he had broken his leg but made it back to his pen.

Now, there’s not much you can do regarding setting a broken leg for an animal this size. We knew a factory wouldn’t take him with a broken leg and it was getting late in the day to get him to a butchers. We made a couple of phone calls but no joy. It seems crazy when there are people starving in the world, not to mention the loss of approximately €1500, but all we could do was get him put down and he went for dog meat the next day. Yes, I was struggling to think of a silver lining for this one. I had thought if we could get him butchered, I’d buy a huge deep freeze and yes, I was quaking at the prospect of that much meat (it would probably last us about five years – no problems working out what to feed the silage men that’s for sure) but was looking forward to having a go at cooking every bit of him ‘nose to tail’. All we could do was be glad he was out of pain and put it behind us.

There’s an expression in farming ‘first loss is best loss’. It often happens that when something happens to an animal (e.g. a severe illness or an injury) and they are looked after then for months to get them to an age and size for slaughter but something happens and they just die or have to be put down.

And my last silver lining – I was supposed to go to Mullingar last night to be in the audience for the Big Week on the Farm programme but I cried off as there was just too much on (cattle going to the factory, cow calving, children having to be collected plus I was going to a conference this morning). Travelling home from Maynooth today, I was about ten miles from home when the car seemed to lose power. By the time I pulled in, the battery and oil light were flashing red and then it cut out. I had to call a break down company (covered by insurance) and get it towed to our local garage so I’ll find out tomorrow what the story is. The silver lining is I wasn’t far from home and my mum drove down to collect me. Fingers crossed it’s nothing too serious as we are a one car family so will be ‘carfree / carless’ for a few days.

The weather has been pretty bad here lately and the cows had to go back in full-time for three days.  Apart from the extra work, it means we don’t make as much money as their yield decreases. We got them out yesterday and decided to open the gate in the evening and let them come in at their leisure (to minimise damage to the soft ground and grass). I was out feeding calves and there was no sign of some cows. Off I went and found at least 20 of them enjoying the beautiful purple sky at the top of the hill. I enjoyed the walk too! 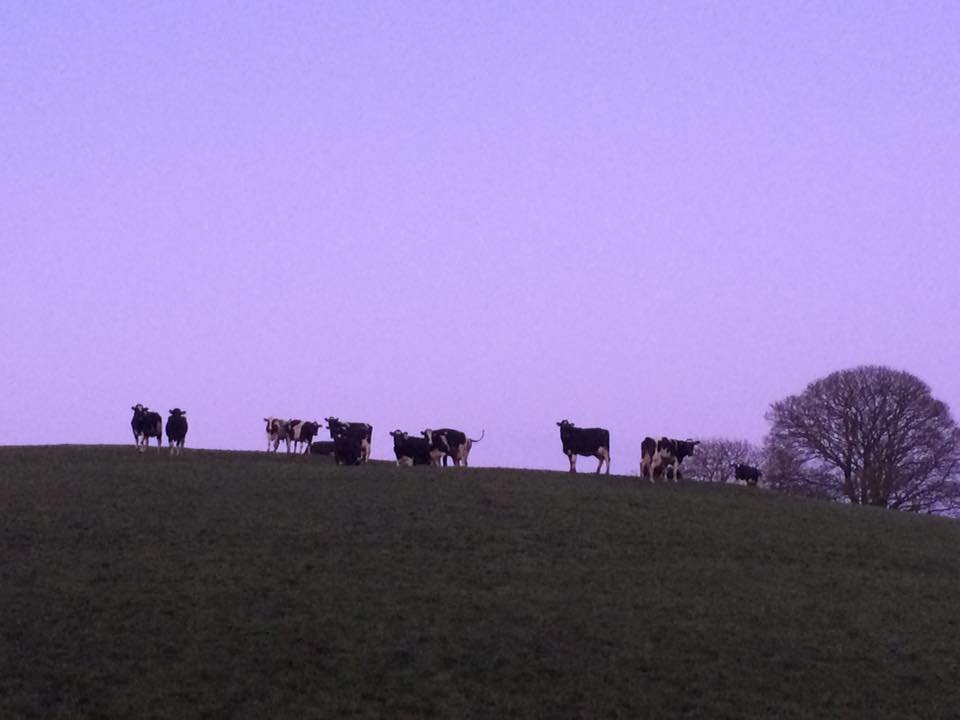 Farming can be so unpredictable at times, and of course, where there’s livestock there’s deadstock, so it can be a challenge to find that silver lining at times. Would you agree?

2 thoughts on “My Farming Week: Neighbourhood Watch and Silver Linings”