My farming week revolved around the Ploughing Championships this week. Well, if I’m honest, it feels like the last two months have revolved around it as I’ve been busily writing, editing, getting feedback from my editor, briefing my illustrator, contacting printers and everything else that goes with self-publishing a book. I seem to make things worse for myself by writing good stuff when deadlines are looming!

I had contacted the editor of the Farming Independent, Louise Hogan, some months ago and asked her if they’d be up for launching my book at the Ploughing Championships. It was a huge honour to have author and columnist, Ann Fitzgerald, launch An Ideal Farm Husband, on Tuesday. 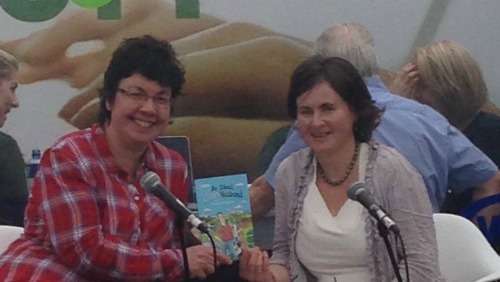 If I’d been a traditionally published author, it would have been a fabulous launchpad for a farming book but for a self published book to get that kudos from a national newspaper, it felt brilliant. They didn’t even ask to see the book before the event either but went on my track record of my previous two books so a huge thanks to Arlene Regan and Daire Whelan of Marketing, and to Darragh McCullough and Louise Hogan as deputy editor and editor and of course to Ann too. 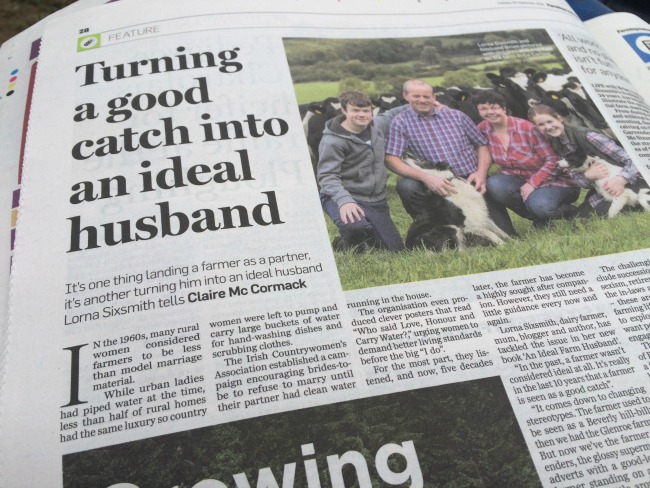 Claire McCormack wrote a superb piece in the Farming Independent for the day of the launch and I love love love the headline! 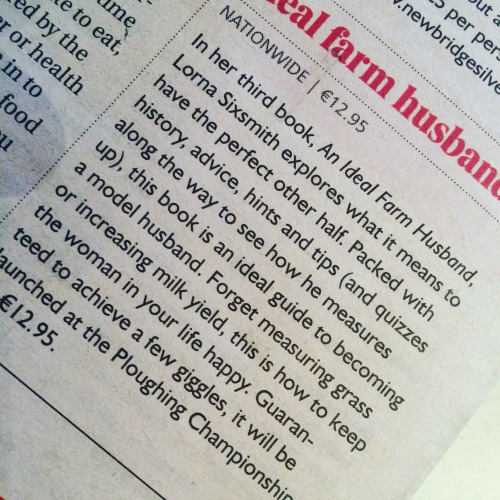 I also got a mention on the back page of Irish Country Living the previous week which I was delighted with, particularly as one of the disadvantages of self publishing is that I tend to leave finishing the book so close to the actual launch date so there really isn’t that much time for getting advance reviews and press coverage. 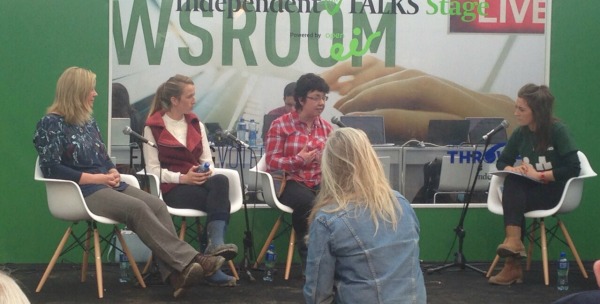 Claire McCormack was the MC for the “Women in Farming” panel and I’d been so busy, I hadn’t really thought about it properly beforehand in that it was only when I was sitting there with two other farmers, that I felt really proud and honoured to be asked to be on the panel. One of the questions and answers made it into the paper the next day and I’ll explore why I think Ireland needs a “women in farming” group in a future post very soon. 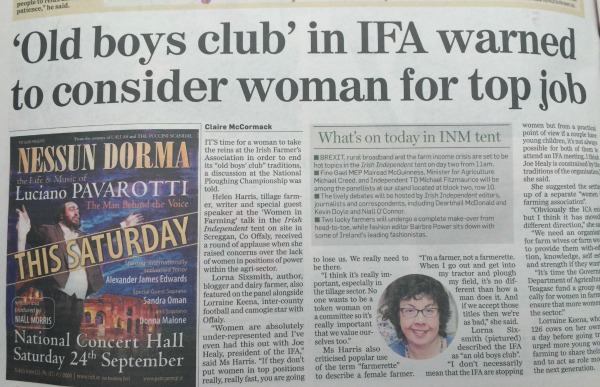 I was so nervous about my first radio interview at the Ploughing, partly because it was the first big event of a busy morning. I needn’t have worried as Sean O’Rourke makes it all very easy though I’m telling myself that the adrenaline improved my interview! There must have been 200 people in the RTE studio at the Ploughing not to mention all those listening in their cars and homes too. It lasted about ten minutes if you’d like to listen. 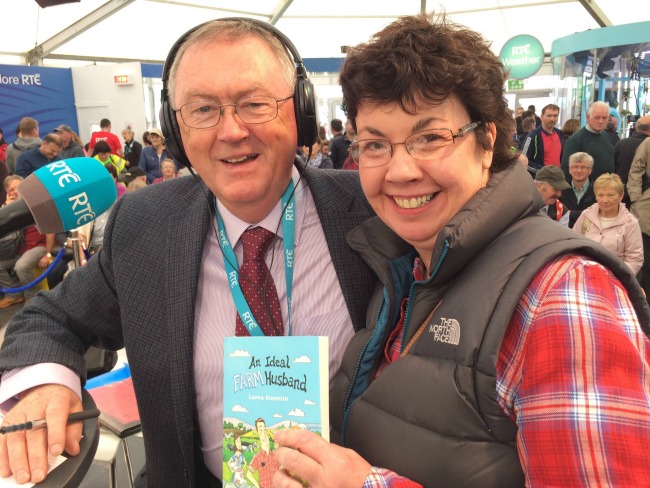 I also did a telephone interview with Joe Finnegan of Northern Sound. This was just as enjoyable as I anticipated as Joe loves playing Devil’s Advoate and we always have a good banter – the link is here if you’d like to listen. Pour yourself a cup of tea as it lasts about 15 minutes. 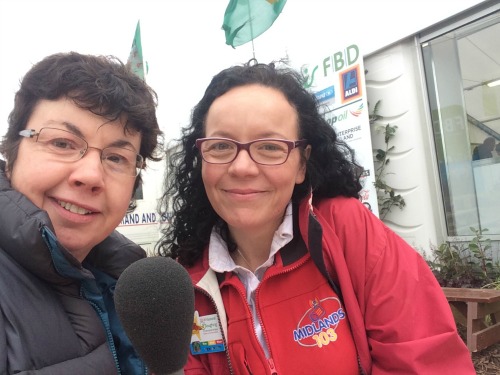 I met Ann Marie Kelly of Midlands 103 and she is including the whole recording in her show this week. We must have chatted for about 20 minutes and as we were sitting on picnic benches, sipping cups of tea, it felt more like a chat than an interview. Here’s a link to it on soundcloud.

I also got a 10 minute interview on Irish TV and shared the sofa with Mary Phelan of Irish Country Living. I don’t have any photos from that though but was great to get the chance to talk farming and of course, An Ideal Farm Husband. My reading on the various terms for Irish rain was included in Irish TV’s Carlow Matters the same week – I’m at 14 minutes in if you’d like to have a look.

One of the nicest things of meeting readers at the Ploughing Championships is hearing their stories. One farmer hadn’t heard I had a new book out but came up asking that I write one and was delighted to buy the new one. He had bought the first two and said “they were the best money he ever spent”. High praise indeed. His wife isn’t from a farming background so whenever he does one of those annoying things that farmers do such as expecting wives to be in two places at once when working with livestock, they have a good laugh about it. I heard some sad stories too: farmers who admitted to me that they had worked too hard, that they hadn’t taken time off to go on holidays with family and now it was too late for their relationship, they had moved too far apart.  I met people who hadn’t heard of my books but chortled as they flicked through them. And of course, lots of people had heard me on the radio or seen mentions of the books in the farming papers. 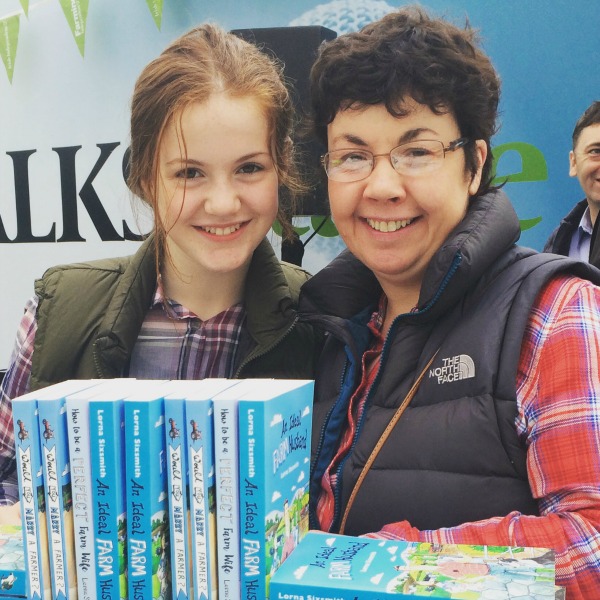 All in all, it was a busy and successful three days. My third book has been launched. It’s now available in all Irish bookshops and from my website. It will be available on Amazon later this week once I get the Mobi for the ebook and get the proof from Create Space. I also hope to get all books stocked in numerous farm shops in the UK. Two of them are also available on the Scottish charity RSABI website too.

Needless to say, I didn’t get to see any ploughing at the Ploughing Championships!

4 thoughts on “My Farming Week – An Ideal Farm Husband #Ploughing16”