It was quite an uneventful week in many ways yet how can such an uneventful week still be so busy? The sun has started shining again and apparently it will be nice for the next week. As I collected Brian from the outfarm and brought my dad an icecream as he was rolling, memories from years ago in that field came back to me. The Chapel Field was re-seeded last year and the plan was to check there weren’t too many loose stones and pick them but it didn’t get grazed down enough and needs to be closed for silage. Rolling will stunt grass growth slightly but that’s better than a stone damaging the harvester! The outfarm is 100 acres, split into six fields with a narrow road dividing them. When I was a child, my dad and workman appreciated having an extra body there to stand in the gap if moving cattle across the road as otherwise my dad would stand out on the road, and Tommy, our workman, would drive the cattle out and then race across the Chapel Field to beat the cattle trotting and walking along the road so that he would reach the field gate before them. As a fit amateur footballer, he always did it. Nowadays, we use Sam (our collie) as the third person if no else is around and he drives them out. Just as well, as there’s no way I’d outrace cattle without having a heart attack! 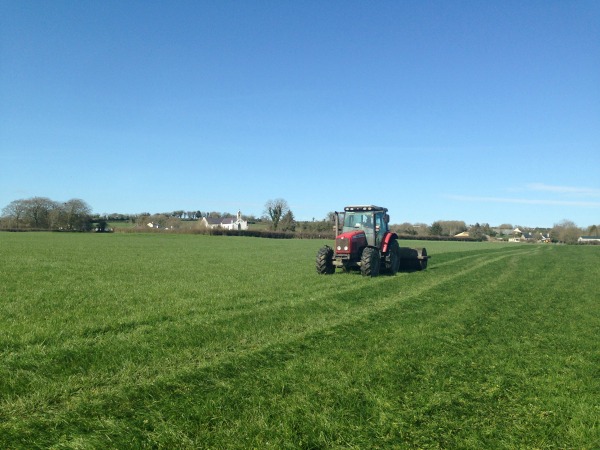 Rocking and Rolling on a Beautiful Spring Day

When I was around 12, there was an extremely wet summer around silage cutting time. The contractors had cut a couple of rows around the edge of the Chapel Field (the headlands) and then the heavens had opened. They tried to collect it but just bogged in the ground. There was a sunny day a couple of days after but the ground was sodden and wasn’t up to heavy machinery. My dad and I headed over with the small trailer and he forked the grass up into the trailer (to bring in to feed the cattle which were housed indoors as it was so wet) and I trampled it down so more would fit in. I was remembering reading about Laura Ingalls doing the same for her father when he forked prairie hay into the wagon – so much for improved mechanisation.

The maiden heifers were brought home the other day. The breeding season starts on 4th May so they are kept on the home farm to make it easier for observation (in terms of noticing they are on heat and getting them inseminated). ?One load were weighed on the way home, the local creamery has a weighbridge, and they are an average of 330kg which is fine. They should be approximately 340-350kg on breeding but that’s still a couple of weeks away so they are doing well.

Moving cattle to and from the outfarm is now done by tractor and cattle trailer. It takes 8/9 cows or about 12 -14 yearlings depending on size. Years ago, moving cattle the mile and a half was a major episode a couple of times during the summer. My mother drove in front of them, starting off with a car full as we got out to stop gaps and gateways, then we’d get to the stage that most of us would have to run past the cattle to get out in front to stop another gap. It’s easier said that done to run past cattle on a narrow road as they tend to speed up and try to outrace you. Once they can see you are getting ahead of them, they tend to drop back but it can be touch and go for a few seconds. There was more than one occasion when an odd one would hop over a dodgy fence into a neighbouring field and it would all have to come to a halt until it was retrieved. Luckily, apart from crossing one busy main road, the road over was quiet and narrow. 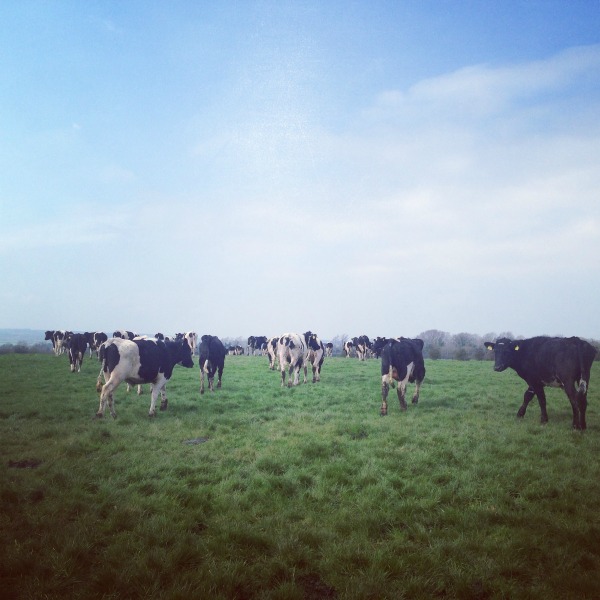 Brian was at the creamery the other day and while signing for his purchases, he got into conversation about calf feeding with the lady behind the counter. We have quite an old fashioned system for feeding calves, it’s a case of carrying buckets of milk to the calves and tipping them into the teat feeders. She was appalled to hear that I was doing all of it and that we didn’t have a pulley system. She called out to one of the men who works in the creamery to tell him the dreadful news. Now, he’s very matter of fact with quite a dry wit, always very polite to me but he and Brian would always have a laugh together. ‘Ah,’ he said ‘Sure she’ll feel good once she has it finished and then she can blog about it’!!! I was hugely amused. So, yes, I am blogging about it!

I put all of the calves (except the seven newborns) onto Once A Day feeding this week. It was delayed as when they were getting sick and there seemed to be a different six or seven sick at each feed, spread through the 4 calf sheds, I felt it was easier to just feed them twice than going back in to try and tempt some to drink if they hadn’t fed that morning. Then we moved some around so I gave them a couple of days to adjust and then I had a couple of mornings when I was rushing off so it was eventually done on Friday morning. It always takes them a couple of days to acclimatise to it and as there are now almost sixty calves in the hay shed in six large pens, there’s quite a cacophony of bellowing from all of them when they are waiting for their milk. Yesterday morning, there were two cows in the maternity unit part of the hay shed and as I pushed open the door, they just turned and looked at me as if to say ‘Can you do anything about this bloody racket, I’ve got a splitting headache’!

Before I had children, I always presumed that someday I would say ‘how on earth did I create such a creature’ assuming that someday one of my kids would be a complete tearaway by the time they reached fifteen and I might be saying it in disgust or alarm ( I hadn’t a broody bone in my body until I was 31 by the way, I just assumed there must be a strong maternal bond as no one except a mother could love some of the tearaways I was trying to teach). I never ever thought I would be saying it with such wonder and such frequency. Okay, our son is sports mad which comes directly from my dad as Brian and I would never watch sport unless we absolutely had to. He’s incredibly particular about things whereas I can be quite slapdash. He’s brilliant at Maths and Science (comes from my dad and Brian – there were plenty of engineering Sixsmiths too so it comes down a long line) so I guess that is understandable but it’s his patience and pretty good social skills that often surprises me too as I had neither at his age. 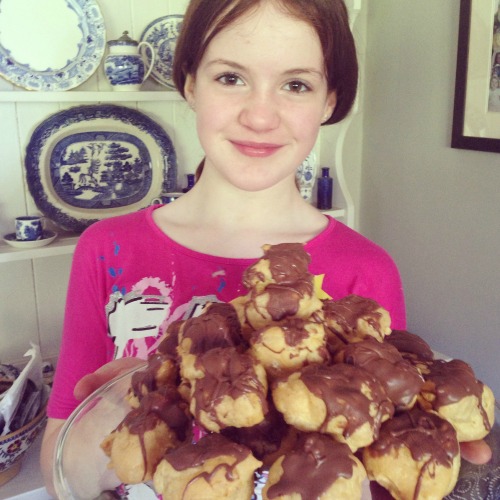 Profiteroles made by fair Irish hands

Our daughter is a complete marvel when it comes to baking. On Friday evening, she made a Victoria sponge when I was working up the yard and even washed up the baking stuff so it would be a complete surprise (but I could smell the fresh baking as I came in). She made profiteroles yesterday and when I came in from the calves this morning, she had queen cakes going in the oven. I had to bring W to a Boys Brigade service this afternoon and she stayed at home with Brian, making a rhubarb tart. When I was ten, I was pretty useless at even setting the table. I would never have had the initiative to go and make a sandwich, let alone bake a cake. I was either playing in the woods with the dog, going off for a cyle or was reading books. I can’t decide whether it is all down to her being amazing or if I played a tiny part by starting her off baking when she was little!! So yes, I do look at her sometimes and wonder ‘how the hell was I lucky enough to create such a miracle’.

All in all, my farming week was a good one and I hope you have a nice week this week. The sun should be shining here so I hope it does with you too.