It is always lovely when the first calf arrives though, the first one is always special and even more so if it is a heifer as this year’s was. Dairy heifer calves are worth more than bulls from a dairy British Friesien herd plus it is nice to know that they will ?live for longer! 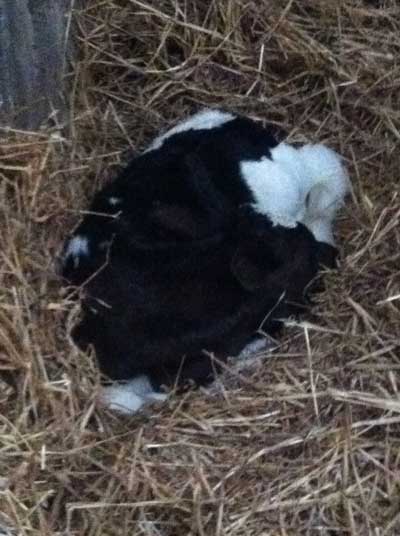 Cuddled up in the straw and fast asleep, here she is at less than 24 hours old. It may seem cruel but we remove the calves from their mothers after they have had the first colostrum (called beestings around here) which is all important for their immunity levels. They are then fed more colostrum by bucket for the first couple of days.

Why do we remove them from their mothers? Well, dairy cows have been bred to give a considerable amount of milk and a good dairy cow would probably give enough to suckle more than 4 calves so it doesn’t make economic sense to leave them with her. Suckler cows ( produce a calf for the factory) tend to have less milk but are much meatier and their calves will grow much stronger more quickly having a meatier build and also having access to milk whenever they wish rather than just twice a day.

Twin calves were born the other night, one male and one female. ? The female will most likely be what is called a freemartin in that she will be infertile so will not enter the herd but will be fattened for the factory. The testosterone from the male calf in the womb affects her hormone levels and renders her infertile. We once had a female twin to a male that Brian noticed bulling (on heat) and to date, she has had 2 calves but it is rare.

The female twin is a beautiful dark red and white with her brother being black and white. She was a little weak so Brian put her under an infra red lamp for 36 hours and gave her small feeds regularly. I was out in the yard when he was moving her to the calf shed and I was interested to see if she and her brother would recognise each other, would that connection from the womb still be there?

It was. The other calf in the pen ignored her but her brother came 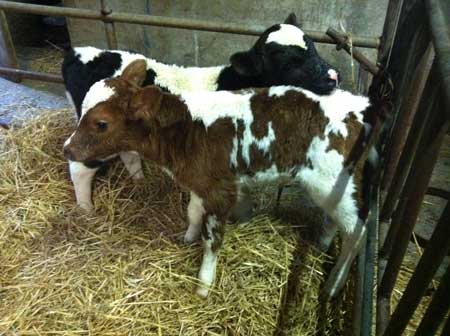 over and they stood side by side, taking it in turns to rest their heads across each other’s back. Go on, say it ….. aaaaahhhhh. It just shows the bond is there from their tangling of limbs while in the womb.

We have two twin cows in the herd (twin heifer calves really is a bonus) and they always stand close together in the field, still having that familial connection.