Many of you might have heard me refer to our goats but I haven’t actually devoted a blog post to them as yet and have been meaning to do so for some time. To be honest, I feel I could almost write a book about these goats! 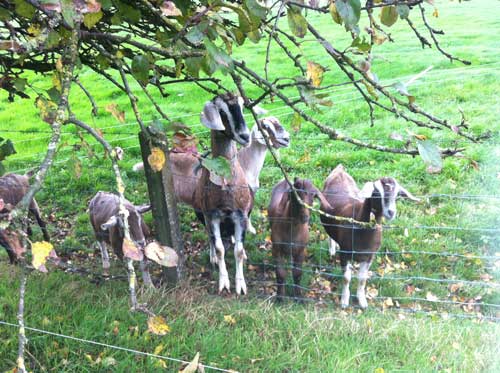 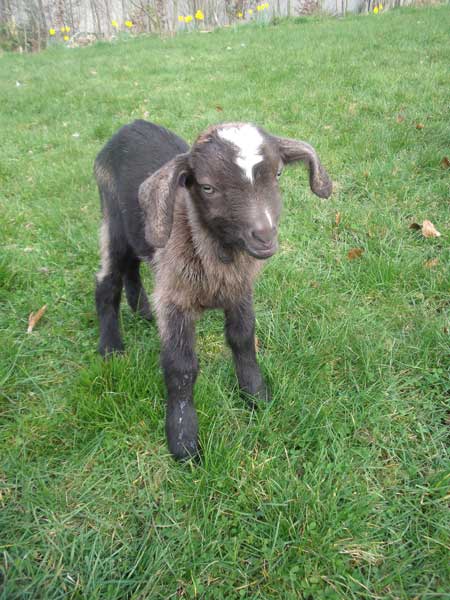 Looking at this photo above of Katie who was born this spring, I can’t believe how tiny she was. We first got 2 goats about 6 years ago, the reason being that I am allergic to dairy products and back then, the children were too. We got Becky who was the milking goat, and Megan who was a yearling, to keep her company.

I could write a book about Becky, she is extremely devious, extremely crafty, hard to milk, fat, lazy, hard to get into kid but yet I think I’d be upset if anything happened to her. We didn’t realise she was hard to milk until Megan had kids and she was so easy. To milk a goat, you just squeeze the teats (whereas with a cow you make a downward movement), but with Becky it was like squeezing hard rubber! She has had one set of kids since we got her, despite us trying to get her pregnant on quite a few occasions. 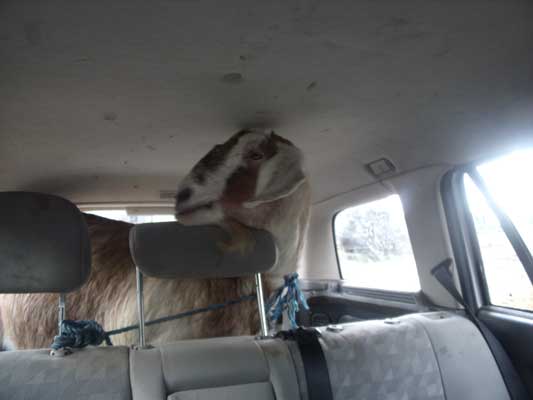 This photo is of Becky in the back of the car on the way to be ‘impregnated’ which didn’t work, despite bringing her along to the billy goat 3 times last year. Maybe it is because she is a bit fat, maybe we didn’t get the timings quite right regarding her being on heat (although the last time, she spent the whole weekend with her boyfriend!).

At the moment, we have six goats, the original Becky and Megan. Megan is mother to Katie (who is gorgeous), Soot and Clay. The boys have been castrated and the plan is for them to go into the freezer soon. I had planned to getting our local butcher to do them for us as he’s done it before but he’s not allowed to butcher them anymore. A separate licence is required now apparently so he is to investigate it for me (I think he was still in shock after the trouble he’d got into having recently slaughtered some, not realising that he wasn’t supposed to – apparently, the furore caused was probably equivalent to murdering a human on the premises – well, not quite, but you get the drift!) So if you know of someone who can butcher the goats for us, do let me know. Rolo (son of Polly who died after giving birth and we were all inconsolable for days) wasn’t castrated as we never got around to it and lost the castrating implement! He is now housed with Megan and Becky and we hope he will impregnate them before he is slaughtered. I don’t want Katie to become pregnant as she is too young so she is with her brothers at the moment. Rolo is starting to stink, you may have heard that billy goats have a very strong scent, yep, it’s true. My eyes actually water when I go into their shed, it is a smell that is indescribable.

Becky used to be the matriarch but due to Megan’s protectiveness over her three kids this year (and Becky not having any so that protective nature wasn’t aroused in her), Megan has become a much stronger personality. Becky was always difficult to milk, apart from having teats resembling hard rubber, she was always dogmatic and stubborn. She would deliberately stand in the place I wouldn’t want her or she would kick. Kate always managed her much better than I would – Brian says our personalities are too alike! In comparison, as long as I follow the same routine for Megan, she comes out of the shed to be milked when I call her, stands quietly and then returns. If the routine is upset by the phone ringing or me forgetting something, she will follow me and bawl! Goats are incredible the way they like the same routine, the same shed, the same field, they really do not like change at all. They are put out in the field in the mornings (where there is a small shed to shelter in if it rains – they hate the rain) and are brought in to the shed in the evenings as they are actually quite delicate creatures and don’t do well in the cold and wet. We think of goats as mountain goats, really hardy and strong but milking goats are not like that at all.

I’ll let you know how we get on with getting the boys slaughtered and if anyone has any recipes for goat meat, I’d love to hear them 🙂

One thought on “Our Goats”