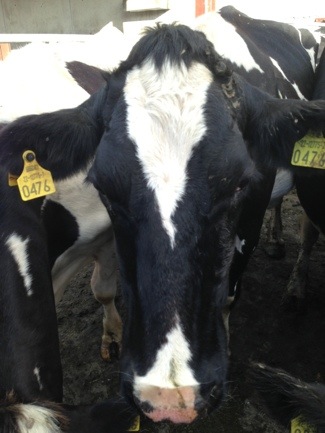 This is our Queen of the Herd – number 476. She was born in 2000 and had her first calf in 2002, our first calving season here in Garrendenny. She’s getting pretty old and to be honest, most cows of her age and condition would have been culled by now. However, farming isn’t just about making a profit, there will be those occasional animals that eke out extra time, because they are special.

The Queen is starting to look like a great grandmother now, she is lame and is one of the last cows when walking to the parlour, partly perhaps so she isn’t jostled by other cows and partly because she is so much slower. She’s had 3 sets of twins in her ten pregnancies which is hard going. Her cell count is high and she is only milked once a day and that milk is given to the few youngest calves who are still indoors. Why is she still in the herd? ?She has such a large udder and has so much milk after calving that Brian was planning on delaying culling her until later in the year. She wasn’t AI’d this year (to become pregnant) but she was bulling one day when the bull was around and he got to her through a gate that had been inadvertedly left open. We’re scanning all the cows and heifers on Tuesday – if she is pregnant, she will give birth again next year – there is no way we would cull her with a calf inside her. She has a huge udder and it fills so full before she calves, it almost reaches the ground – she’s almost in danger of standing on her own teats!

In her lifetime, she will have given many thousands of litres of milk. She currently has six daughters in the herd and a total of 20 descendants in the milking herd (daughters, granddaughters and great granddaughters). From a herd of 90 cows, that’s a significant percentage. She really is Queen of the herd and it will be a sad day when she goes to the factory. I’ll let you know on Tuesday whether she is pregnant or not! I’m hoping she is in a way.

17 thoughts on “Queen of the Herd”