Matchmaking has a long history in Irish courtships and it seems to be making a comeback in the number of matchmaking (not just dating) websites out there. Before I debate whether it should make a comeback or not, let’s have a look at how it worked in the past.

HV Morton reported on his experiences of viewing matchmaking in the 1920s in the West of Ireland (In Search of Ireland, published 1930):

In Ireland, as I noted in Kerry, the separateness of the sexes is remarkable. Love is perhaps in Ireland not a sentimental obsession as it is in England. In Connaught, and in the West generally, men seldom marry for love: they marry, to some extent, for land.

Match-making, which in England would horrify us by its deliberate, cold-blooded unsentimentalism, goes on in the country districts of the West.

He goes on to describe the deal being negotiated, which was also commonly referred to as “the plucking of the gander”. The size and scale of dowries varied according to the wealth / poverty of the farmers but there was still serious negotiating and checking going on. 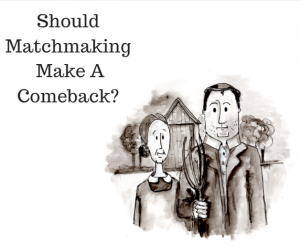 For example, the number of chains in the prospective husband’s cowshed would have to be counted in case he had ‘borrowed’ some cows from a neighbour to make his side of the bargain look more favourable and mean he could bargain for a higher dowry. It would be a little like someone hiring an expensive and new car for the weekend and trying to pass it off as their own.

Of course, the dowry wasn’t always cash. Some families just didn’t have cash and hence it could be something like a cow and a few chickens, or some pigs and some furniture. A donkey seems to have been a good trade too, if the time came to bring in turf and a family were short of a donkey to haul the turf home.

In the example from Morton’s In Search of Ireland (p 199):

The boy’s spokesman, backed by the others began praising the suitor: how he had a well-stocked farm; was sober as well as rich; had no brothers to divide his inheritance. To this the bride’s party answered by praising the girl, as industrious and skilled in the arts of needlework. In the upshot the hundred pounts was agreed to. Then a new discussion arose as to whether it should be in stock or in cash, and the award was made at sixty pounds in cash, and cattle to the value of forty. Then the stock had to be discussed and specified. Lastly, the father dealt with the questions of the ceremonial heifer, which is always given with the bride by any father who wishes to hold up his head in the country. He must buy one, he said, having no heifer beast that he would think good enough to send with his daughter.

Then when the business was settled down to the last detail, the father said: “We don’t know yet if the woman you are looking for is in the house at all?” A message was sent, the girl came in and her health was drunk; and after this ceremony was over, the mother emerged from her retreat in a wall cupboard behind curtains where she had been unofficially present. It is not lucky for a woman to assist at a cleamhnas, or matchmaking. Then the tables were ranged aside to clear the floor for a dance; but one table was set in a corner where the old men drank till morning.  Tea was provided for the young people. “Was it a love match?” I asked. The boy’s mother arranged it all; the girl was older than he. “And in truth there is no society where marriage is more a matter of arrangement than among the Irish Catholic tillers of the soil – and none where the marriage-tie is more binding.”

This situation is slightly different from the norm as it usually happened that the groom was much older than the bride. As men usually didn’t get married until they could afford to keep a family, that often meant waiting until his father was dead and his siblings settled elsewhere hence they were often in their 50s or 60s. Women had to be of childbearing age and it seems that young women in their early 20s were often married to men four decades older.

While Morton saw this as cold, calculating and business like, there were those that saw it as much more sensible than falling in love with an unknown.

He could not understand the mentality of young people today who fix up their future under the light of a full moon and would abuse or turn a deaf ear to anyone who suggested they were incapable of taking such an important decision in so casual a way. These young people were not beyond asking a friend’s advice in the purchase of a second-hand car, or taking a hairdresser’s suggestion on the shade of lipstick to suit their complexion but when it came to making a lasting decision as to their life partner, well these very people were their own capable advisors.

Success, he said, was assured from the start by virtue of the fact that the matchmaker had studied both partners from the point of view of suitability to each other in status, financial position and temperament.

Morton’s experience of matchmaking was the latter stages, that what was done once the two parties had been identified as suitably matched. There was quite a bit of preparatory work first though. This newspaper article explains how the process often worked.

Why did this custom spring up? Well, formerly, the whole economy of a country was in the land and it was of prime importance that holdings be strengthened and improved through suitable marriage alliances. A common parallel among royal marriages aimed at strengthening relations between countries. When parents decided that a son should get married they cast about for a suitable girl in a neighbouring parish. She was, in general, required to be strong and healthy, to help in the running of the farm and of course, to produce another generation to carry on. She should be of good family, a good one that could provide an adequate dowry. When such a girl was found, the parents enlisted the help of a matchmaker.

The matchmaker might then enlist the aid of another male, a relative of the girl. Then they would pay a preliminary visit to the house of the chosen girl. A bottle of whiskey was carried by the matchmaker to create a favourable atmosphere.

Then if the girl’s father was interested, the details would be fully discussed. The matter of the dowry would be settled, whether in terms of cash, land or livestock. If these discussions went smoothly and both parties were willing to proceed, a deputation from the girl’s family would in turn visit the young man’s farm at an arranged date to inspect premises and stock. If all this was satisfactory, plans went ahead full steam.

The dowry was finalised, plans for provision for old people set up and farm signed over to the son. Often the bride and groom met at the altar for the first time.

Of course, sometimes it happened that the negotiations didn’t go so well. Here’s an example from the book  The Farm by Lough  Gur by Mary Carbery (1937) p47:

I remember overhearing my father enquiring of old Paddy about a projected match.

“Tel me Paddy, did Johnnie make the match for his daughter?”

“He did not, sir, though ‘twas very near done when they bruk it clean off.”

“And what broke it?”

“Twas the ass and car that defeated it. Ould Johnnie wouldn’t part with the ass, though the ould woman was content to let it go. So his darter is disapp-inted of a home and young Johnnie is disapp’inted of a wife.”

“I’m sorry,” said my father, who had a kind heart for all young things.

“There’s no need,” replied Paddy, “no need at all. There’s more than one fish in Lough Gur, and the matchmaker is one the trail of another for the both of them.”

Therefore, a person’s life partner could be changed on the whim of a few ewes, a heifer or a donkey. Indeed, sometimes a young bride didn’t know the man she was going to meet at the altar:

Mother was resting after attending the wedding of a neighbour’s daughter, who did not know which of two brothers she was to marry until she stood before the altar and saw the wrong one by her side. (The Farm by Lough Gur, p259)

If the dowry wasn’t paid in full, it could go to court! The Irish Independent on 10th February 1906 records a case where a dowry of £40 was promised but only £15 received and the husband took his father-in-law to court.

What about women who became pregnant before marriage? Well, sometimes the matchmaker worked to find a husband for them too.

If he (the matchmaker) heard of a girl who had got herself into trouble he bided his time until he was approached by a prospective groom more interested in heirs than in moral lapses. As a result, many a girl who wouldn’t have a hope of being asked, found herself being led to the altar.

Not everyone thought that matchmaking was a good idea though. An article in 1936 described it as traffic in womanhood.

There are lots of cases of incurable misery brought about by an unnatural union. Nobody benefits by this traffic in womanhood – even materially – in the end.

The young girl whose father walks her and her one or two hundred pounds of a fortune, into a place already swamped with debt, is indeed to be pitied. The moment her money is gone paying off creditors she becomes a burden. Her mother-in-law might deny her a say in the running of the house.

Although matchmaking was dying out by the mid 20th century in many parts, I remember hearing of arranged marriages that happened in the 1960s in the South East. The dowry was dying out too although a young bride could command more respect in her new family if she brought a dowry or a sizeable ‘gift’ with her. Although the negotiations of the dowry had ended, many farming families gave their daughter a financial gift. This may have been cash or it may have been livestock and it continues to the present day.

Matching websites differ from dating sites because they have staff who take note of your likes and dislikes, your wants and needs and yes, your stage of life too I guess and they use their judgement to match you with someone they think would work for you. Within a dating site, you’re looking at the people there and making your own decisions on who to contact.

Does matchmaking have a role in today’s society? I’d love to hear what you think (after all, I’m an old married woman at this stage!). There are still a few matchmakers around, the most famous probably being Willie Daly from Lisdoonvarna and of course, there’s the Lisdoonvarna Matchmaking Festival every September. There also seems to be a number of matchmaking businesses: these include Intro Matchmaking and Two’s Company. Maybe the auld ways had some common sense in there after all although I think I’d have headed for the emigrant ship!

2 thoughts on “Should Matchmaking Make A Comeback?”