Lisdoon, Lisdoon, Lisdoonvarna, that’s exactly where I headed last weekend. It seems much longer than 6 days ago as I’ve been to the Ploughing Championships in the meantime but more on that next week. This post is going to be about matchmaking and my first ever visit to that most famous of matchmaking spa towns, Lisdoonvarna with the famous matchmaker Willie Daly. Willie has been matchmaking with the help of his 150 year old ledger for many decades, just like his father and grandfather before him. 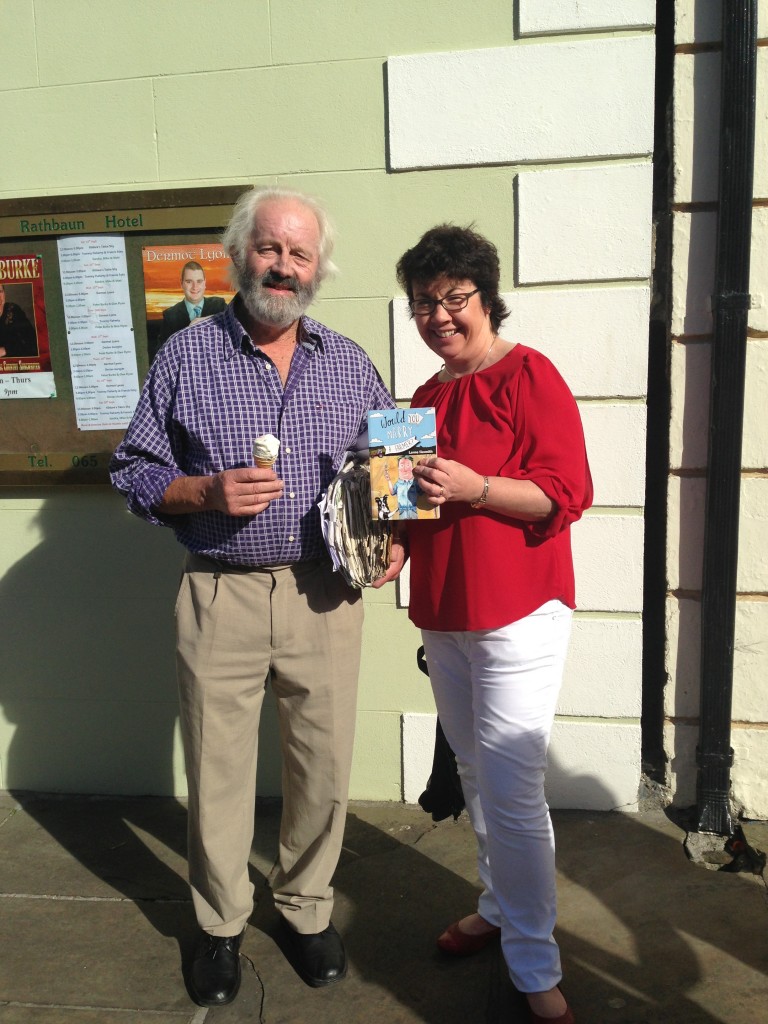 The weather was fabulous, the sun was shining, the skies were blue, everyone was in a good mood, people were strolling around town eating icecream, there was afternoon dancing in all of the hotels with music travelling out to the streets on the sound waves. Talking to some women, they said they come down every single year, not just because they are single, in fact they claimed they weren’t looked for a man at all. They were there for the craic and the dancing. I met a couple who met each other in Lisdoonvarna 47 years ago and return every single year. (I know someone who met his girlfriend at it two years ago too btw so it does work!) ?Having chatted to some people in the Hydro, I went for a stroll down to Willie Daly’s office. It was empty and I felt a tad conspicuous but on leaving it, I met Willie heading home for a rest. I can only imagine how tiring all the talking and matchmaking must be! 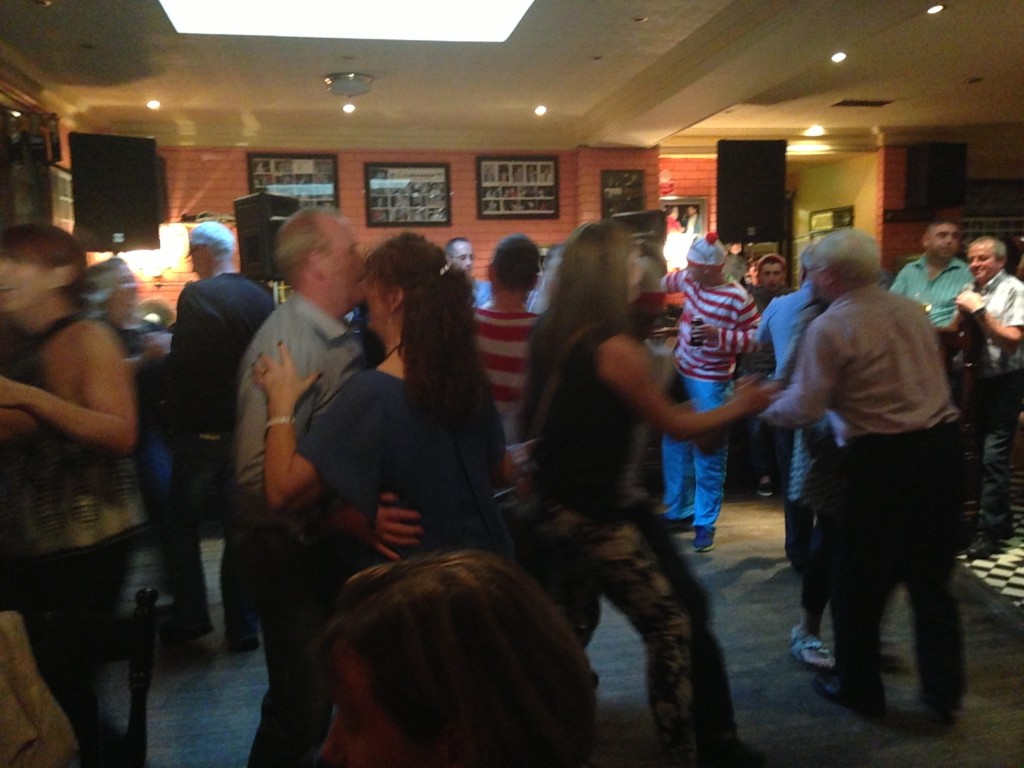 I was amused to be asked a few times if I was married. One elderly gentleman then asked if I was happily married?! ?After that, I was delighted to meet up with Sally of @BannerCoPress, we’ve had many interesting chats on twitter and email about editing and publishing, that it was lovely to meet her in person and chat about books amongst other things.

Brian and the kids had come down too, we decided to make a weekend of it and stayed in The Falls Hotel in Ennistymon. We visited the Cliffs of Moher the next day. The kids had studied it in school so they were really enthusiastic about seeing it. 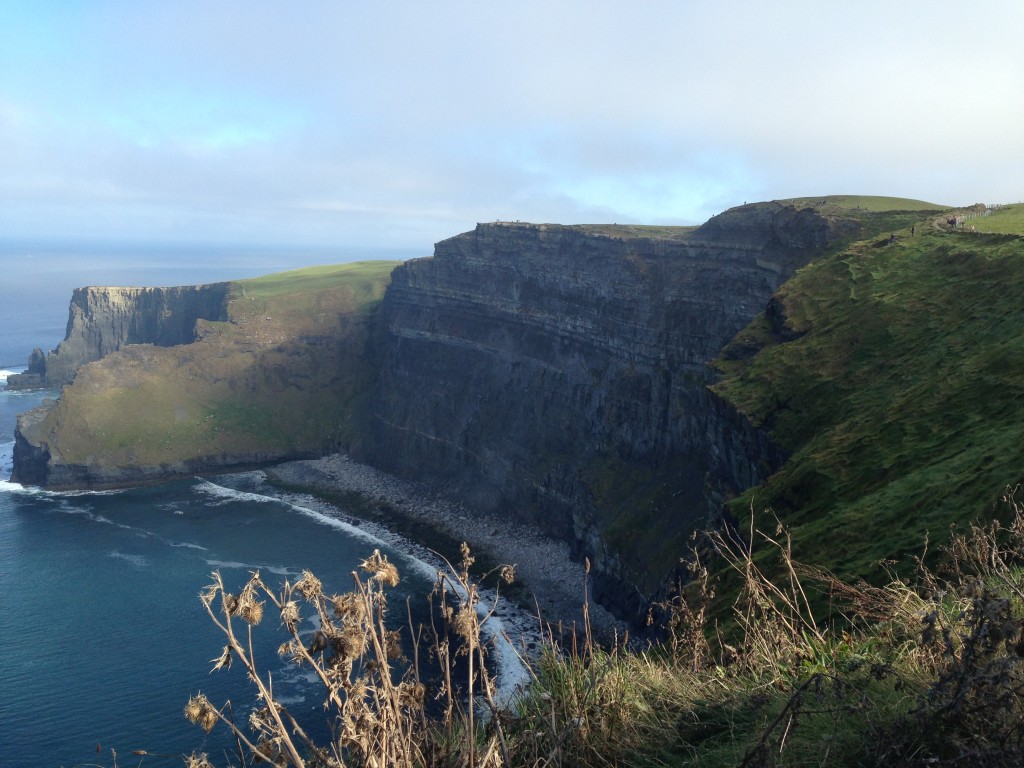 The Aran Islands looked so close but it still didn’t tempt me to want to get in a boat and go over – I get sea sick at the slightest motion! 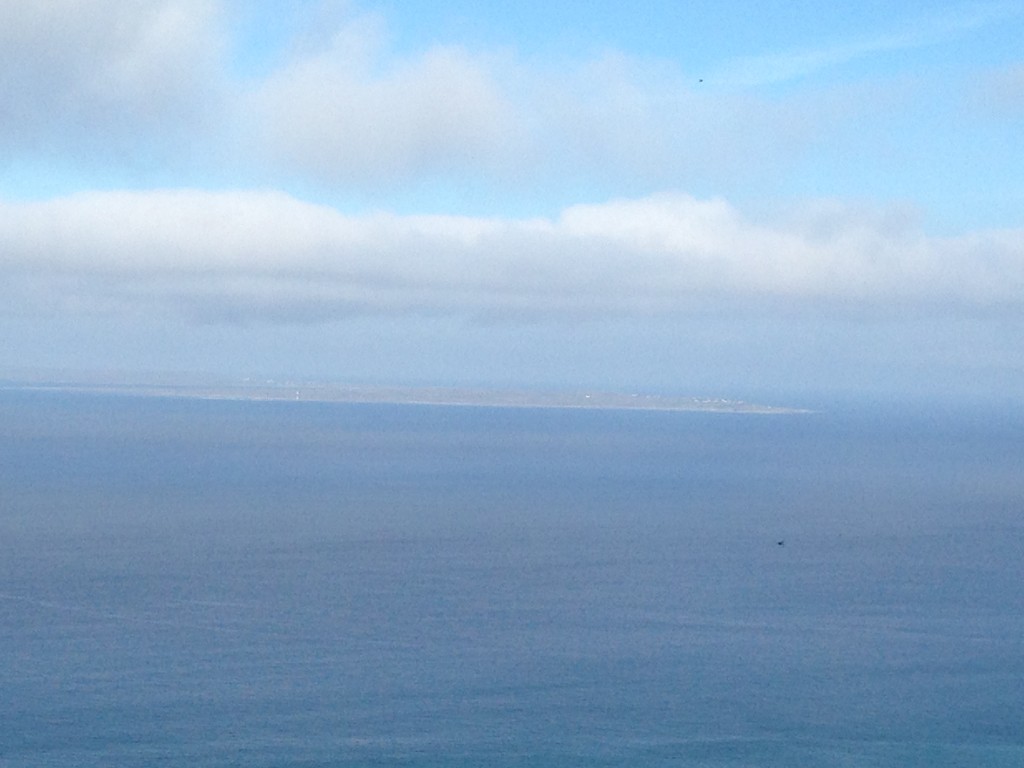 We then went for a walk on the Burren. It was so so beautiful, we all felt rejuvenated after just a few hours, I really wished I could spend another 24 hours there! 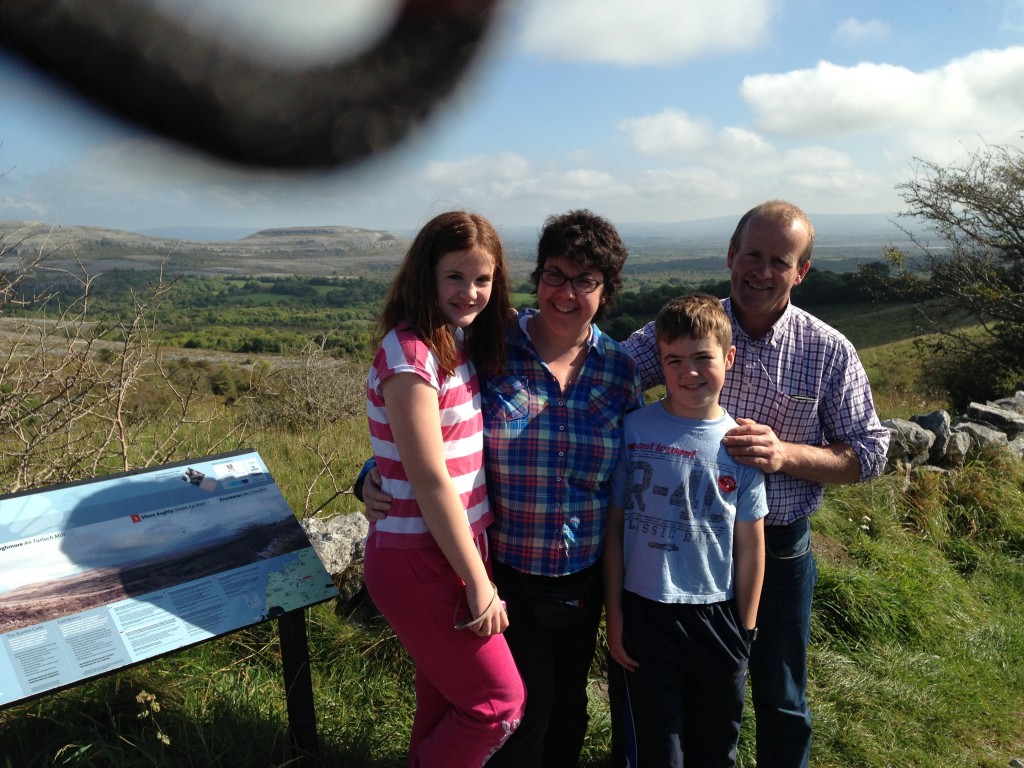 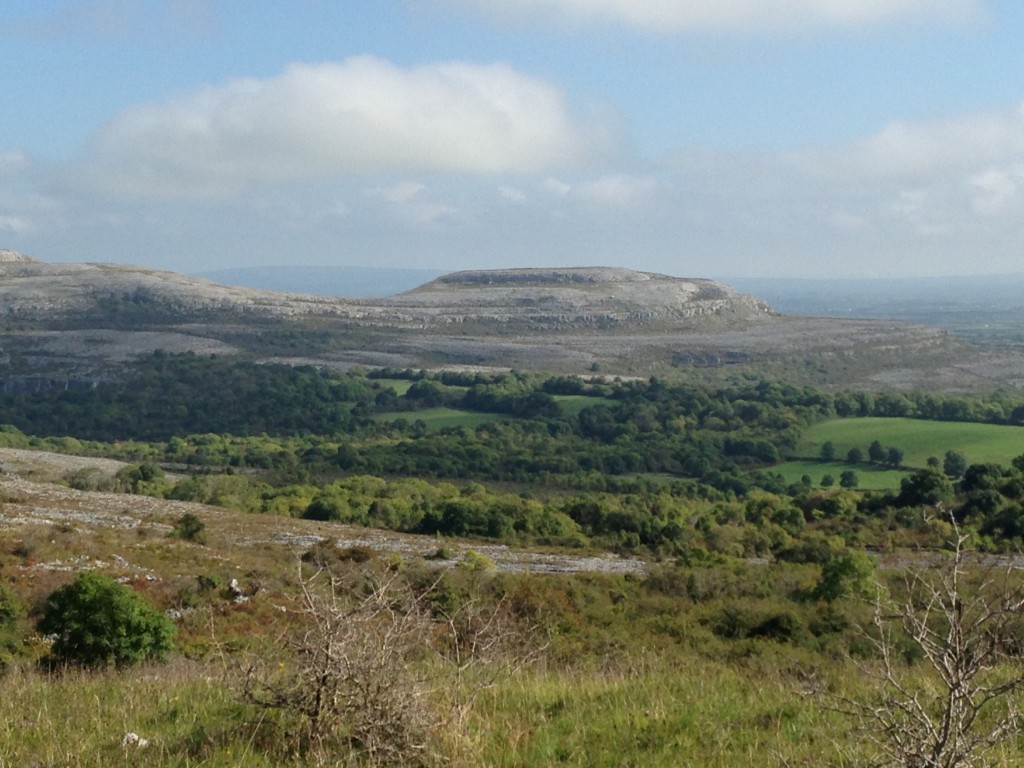 The Burren – spot the re-seeded fields down in the valley

What really struck us was how difficult it must have been for farming families to eke out a living there, incredibly stony ground, very little soil with which to grow that staple food available everywhere else – the potato. In many places, there were very few trees too – and those that were surviving were windswept and tiny. There were pockets of re-seeded fields and even in some parts, the contrast between a few dairy farms and other fields with rushes and stones was incredible. 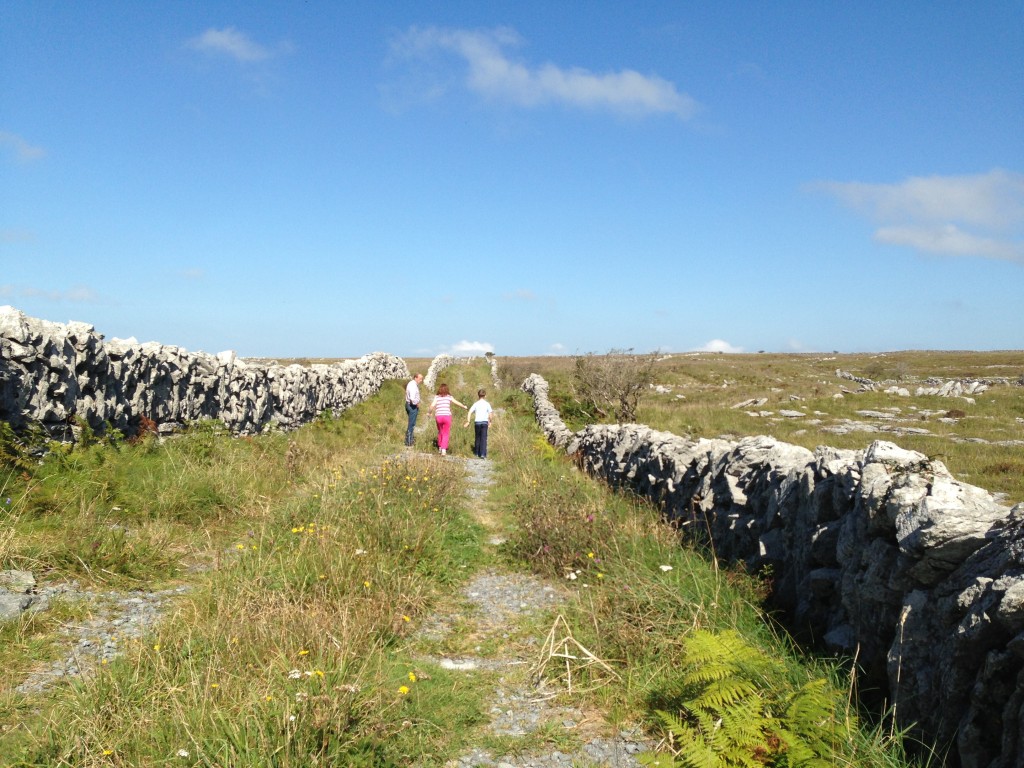 Matchmaking still happens, when people are in the mood for love, they are in the right ‘zone’ and you never know what might happen. Would I head to Lisdoonvarna if I was single? To be honest, the drinking scene wouldn’t be my cup of tea at all and neither would the conversation once people were ‘well on’ but going out around the Burren the next day, I thought to myself that I would definitely go on one of the Burren ‘singles’ walks if I was single. Not only is the Burren incredibly beautiful but even if chemistry or Cupid didn’t strike, it would still be enjoyable as a walk in fabulous countryside with like-minded people. The Hydro sent me details of Marie’s Burren Nature walks and when I contacted her, she told me that the next singles walk is on 18th October from 11-2. In fact, I think I need to become a matchmaker myself – when at the Ploughing Championships, I had two farmers and one lady come up to me asking if I had a dating agency, if I did matchmaking and if I could help them find a partner – I gave them Marie’s number as I felt that would suit them best!

I think the walks sound fabulous – not only is there great scenery for the 3 hours of walking for just ?30 but Marie tells stories of matchmaking in the past, you make a love potion from herbs and you can find love symbols in the stones – and you just might meet the person of your dreams. After the walk, you can go for a late lunch in Lisdoonvarna with the others and decide how long you want to stay. Contact Marie on?0868219441 or at?burrencottage@clareireland.net.

Lisdoonvarna’s second last weekend of the festival is on this weekend too with the LDBT ‘The outing’ weekend from 3rd-5th. They have a Burren walk too and it’s at midnight! ?The Irish Examiner reported yesterday that 46% of farmers are in favour of gay marriage so it’s great to see more celebration of same sex relationships in rural Ireland. Don’t forget to contact the Hydro Hotel for accommodation and more info on any of the above.

Do let me know if you go to Lisdoonvarna or for the Burren Walks – I’d love to hear how you get on. Maybe I’m a matchmaker at heart!

5 thoughts on “Why Singles Should Go To Lisdoonvarna”