I’m working on my third book (Ideal Farm Husband) at the moment and while doing some research in newspaper archives, I came across some articles on what women in the post considered to be an ideal husband. Partly because they are quite amusing and partly because we’re all depressed between bad milk prices, rain and Brexit, it’s time to have a bit of a laugh, I’ve decided to do a couple of comparisons.

According to the Kilkenny People on 22nd October 1904, Miss Pauline Griffith decided her ideal husband would be

as handsome as Apollo, with the courage of Michael Dwyer, the strength of Shadow, the subtlely of Machiavelli the patriotism of Emmet, the enthusiasm of A Loyola, the Irish Irelandism of “An Craoblin” and have the patience of Job. He should be able to eat anyting set before him without grumbling; able to smile sweetly when he finds his papers scattered all over the floor; and the baby flowing soap bubbles out of his fav meerschaum; good tempered when I point my pencils with his razor, and happy when I bring my mother and four sisters to live with me.

However she ends by saying that she has her doubts that she will be able to secure such a man.

On the 23rd November 1949, the Evening Herald ran an article which set out, quite firmly, that the ideal husband was a civil servant. Of course, at the time, farmers didn’t really figure as a good catch – apart from being seen as mountainy men in possession of a draughty farmhouse and a relatively young mother who would live for a long time, many couldn’t afford to marry until well into their 50s or even 60s. Indeed, there was so much concern about the lack of marriages to farmers that the topic was discussed in many newspapers at the time as shown in this article in the Irish Press.

Dr McCarthy, County Medical Officer, had stated that in 25 years time, the rural population would be completely wiped out if there were not more marriages at younger ages. He knew of cases where young farmers had to wash their own clothes and do their own cooking while there were many good-looking girls in the neighbourhood who were forced to waste their charms on the desert air. ….. Nobody wants to marry a farmer nowadasys owing to the economic conditions which they are trying to live.

Here are the reasons why a civil servant was a preferred choice according to the Evening Herald in 1949.

1. It is the very essence of his code to keep his mouth shut and never question the policy of his superiors. Women like those who don’t answer back.

2. He sits down all day and therefore he needs exercise at weekends so he can keep the grass in order. This probably explains why his lawn is like a billiard table.

3. His salary is always known to his wife and obviously he cannot have a secret reserve.

4. His hours are fixed and he can never ring up to say he has been kept late when he really wants a game of cards or a few drinks.

5. He can always be reached by phone at the office and encouraged to bring home messages.

6. He can take some of his leave on ‘odd days’ or even half days.

7. She can get him to take a day off and accompany her on a shopping expedition and carry all the parcels.

The topic surfaced again in 1968 when the Irish Press included an article on 10th January.

1. He rarely catches cold, and if he should, it is sent about its business, never once encouraged to linger with punch and sympathy for two snivelling weeks.

2. His suits repose on coathangers in the wardrobe, not in a state of collapse on chair backs, or enduring slow strangulation on a door-nail.

3. His shirts are always immaculate.

4. His food fads are largely non-existent, he never pampers a neurotic digestion, a device indulged in by men of lesser stature. Into this latter category let us fling all these men who want their eggs boiled for exactly 3 minutes; who pick out (with infuriating care) every speck of mixed herbs in an otherwise favourite dish; who waves away onions with a disdainful hand and who have a strange penchant for soggy chips.

5. He treats newspapers with respect.

6. He keeps his golf scores and old bridge hands to himself.

7. He avoids such home wrecking comments as “You never wear that nice little dress you had when we were first married.”

8. He is always on time for meals but is sufficiently realistic not to expect to be actually adequately fed when a do-it-yourself job, like painting the kitchen is in full bloom.

The topic surfaced again in 1989, this time in the Sunday Independent on 16th April. There were many contributors to this article and here are their conclusions:

1. One who dies young. It is a whole lot easier to live with a vibrant memory than spreading flesh.

2. Marry the first time for lust, the second time for money and the third time for companionship.

3. He could be a breadwinner; a meal ticket; a social, financial and sexual partner or a storm in your teacup.

4. He could be a  mountainy man with loads of land and no mother-in-law.

5. Someone who is involved in what he is doing and yet encourages you in your direction. 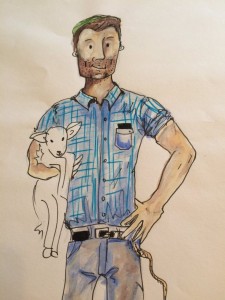 For those of you familiar with my book Would You Marry A Farmer, this was an early draft of the ‘farmer’ but we decided he was too perfect, too sauve, too good-looking, too ideal! The guy we went with is a little bit rougher around the edges, one who needs a perfect farm wife to keep him on the straight and narrow!

You can see why a farmer didn’t cut the mustard in the 1950s! However, they don’t do as badly as you might expect. Maybe the modern farmer could be the ideal farm husband. What do you think?

1. Okay, they might keep their mouth shut but I’ve a feeling many will question plenty of things – at least I hope they do. There’s a lot to question if we’re going to come out of Brexit intact.

2. I think most farm wives cut the lawns. He’s probably more fussy about the grass in the fields than in the garden.

3. Find me a farmer with a secret reserve of money and I’ll show you a pot of gold under a rainbow.

4. His hours aren’t fixed but he’s going to either be in one of the fields, a tractor, a shed or the milking parlour.

5. He’s self employed so can also take ‘odd days’ off – but only when it rains!

6. He could accompany her on a shopping expedition but one of them would probably end up murdering the other so probably best to let me act as babysitter and take the children herding with him.

7. He might get sick but he manages to keep working.

8. His farm clothes never make it to a door nail but at least he doesn’t have suits to be kept in a pristine condition.

9. Yep, farmers can be fussy eaters – I guess he fits into that category of men of lesser stature then!

10. I bet he can’t remember any of the clothes you wore when you first got married.

11. Never on time for meals but at least that’s a good excuse for the dinner not being perfect. 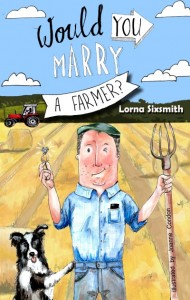 This is the front cover of the first book. As you can see, he needs a bit of tidying up from a perfect farm wife. He has good intentions with that big sparkler but he’s not going to leave the farm or his best friend behind. Once we got the farmer right, the rest of the illustrations were quite easy really. It’s not long now until you’ll see the front cover of Ideal Farm Husband, the last of the trilogy! I’m meeting with the illustrator on 11th July so it’s getting exciting.

2 thoughts on “What is an Ideal Husband?”