Not everything in farming is exciting. There’s plenty of jobs that can be repetitive, not necessarily boring but one is able to daydream a bit while doing them. The problem is, I tend to let my mind wander quite a bit sometimes particularly in the evenings if I’m tired. 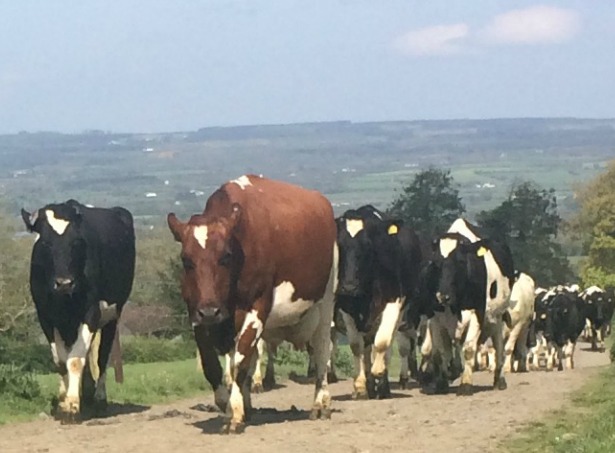 Part of our farm is separated from the rest by a public laneway. It is seldom travelled, the type that has grass growing in the middle but its existance means that gates and wires have to be put in place when the cows are going to the fields at the other side, and they have to be shut and taken down afterwards. One field, Burke’s, is directly opposite the “car road” (not for cars but a wide path for cows to walk along – see in the photo above) that is used to access all the land at the other side of Garrendenny Lane. All we have to do is open the two half gates on either side and use a chain to link them (as in photo below). The cows walk straight across into Burke’s, no danger of them going left or right along the lane. 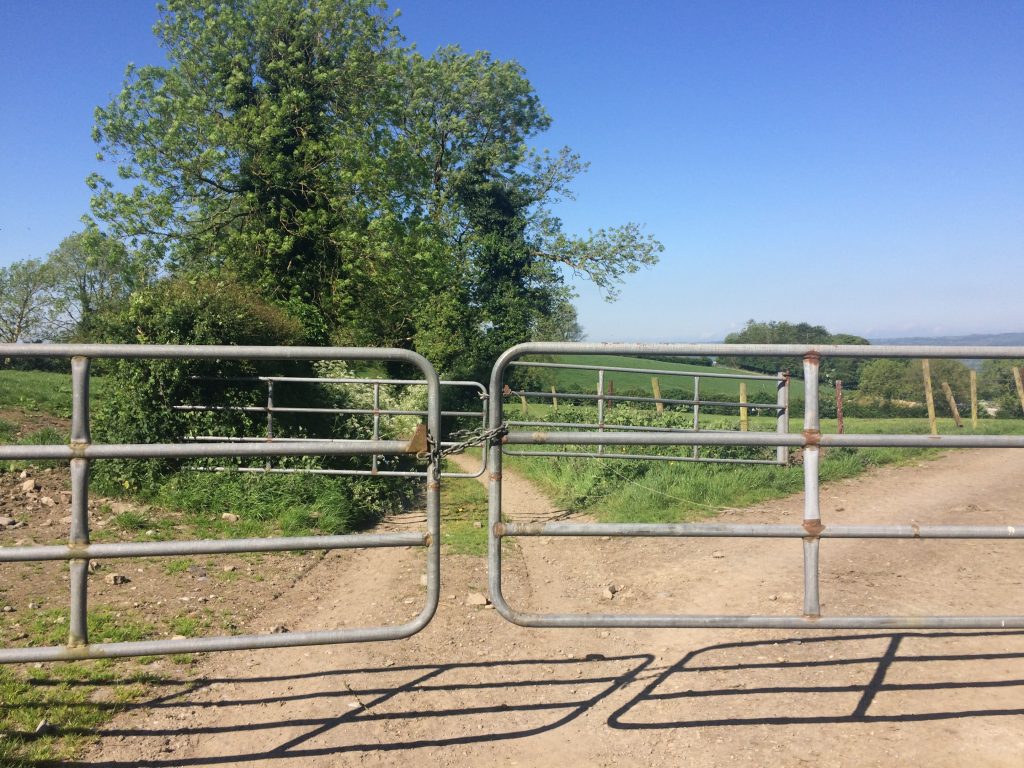 They had finished grazing Burke’s, getting five grazings off it.  On this particular evening, they were to turn left at the top of the car road. I was supposed to open one gate across, using wire to secure it to stop the cows going right. They were to turn left, walk about 50 yards, and then I had to put up a wire to ensure they went to the right towards the other farmyward and into a field off it. On I went, Brian said he’d give me a few minutes head start before he let on the cows, and I was just starting to wonder where they were when I heard some bellowing. I had been admiring the sunset and chatting to Lou (our dog) and really was in a world of my own.

Why on earth were the cows bellowing and where were they? Then I realised – somehow, they had gone into Burke’s field and weren’t happy that not alone did they not have any fresh grass, but there was very little there to eat.

As I walked back down the lane, I thought back. Had I, in an auto-pilot state, opened one of the gates to Burke’s, attached it to the other gate so the cows couldn’t turn right (instead of using a wire)? I was afraid the cows would come out of the field and head back down the lane to the farmyard, so I rang Brian to come up. To give him credit, he didn’t swear but laughed.

As I arrived at the gate, the cows were still bellowing in disgust. They turned to look at me and walked back to the gate with a very threatening and determined gait as if to say “if you don’t give us fresh grass, we won’t be responsible for our actions”.  Lou was able to round them up quite quickly, they weren’t hesitating, and we got them to the right field, which had lots of fresh grass ready for them to eat.

The cows certainly won’t let me away with any daydreaming! Perfect farm wife fail I think!