Following on from my Farmer / Farmer’s Wife post the other day, I was amused to spot this letter in the Farmers Journal over the weekend. A farmer, concerned about the increase in farm related deaths, was of the opinion that a Job Bridge scheme for farmers would improve farm safety. I have to admit I’m not overly a fan of Job Bridge or some internships (too many businesses are getting trained staff very cheaply),are students out there looking for experience / work but I do like his point re how having a second pair of hands or eyes is often essential on farms – not just for helping with a task but also for noticing the many dangers. It’s clear from the letter that they are enjoying working together too. 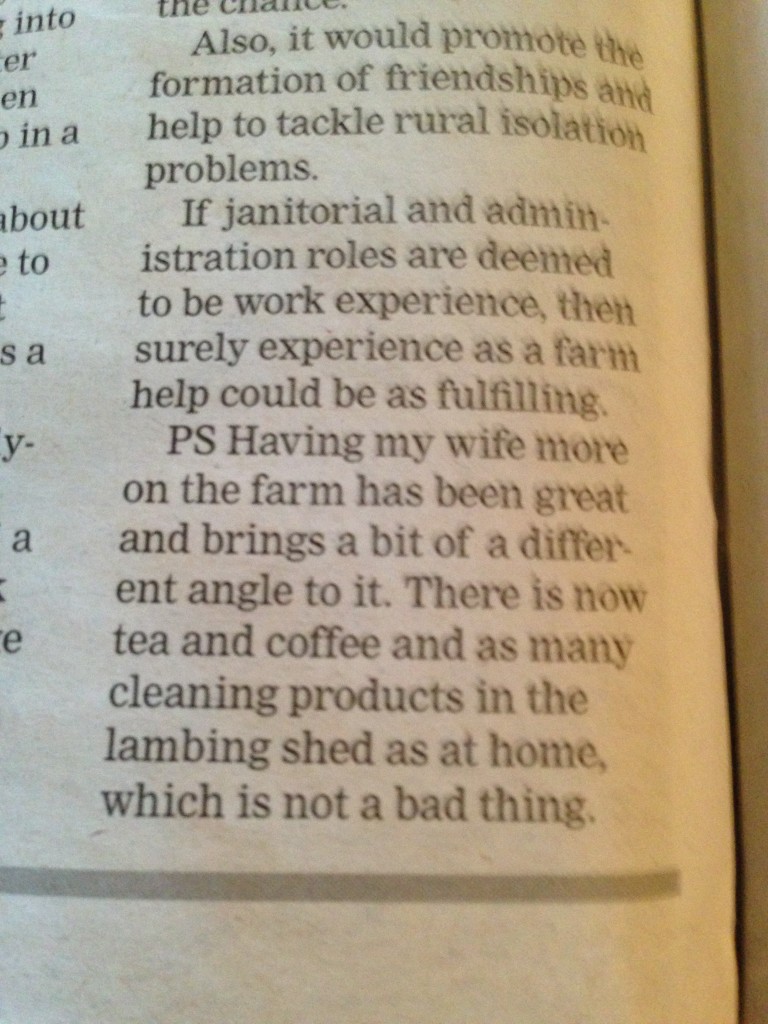 What really amused me was the value he put on having his wife working with him, not just in terms of physical help but also the fact that the lambing shed now has tea and coffee making facilities as well as a plethora of cleaning products!

I have to admit our calving shed is sadly lacking in comparison! ?I will say that Brian really appreciates the fact that I am doing all the calf rearing this year. By the time he’s done a long day’s work and milked the cows twice (which includes the dancing heifers), the thought of starting in to train newborns to drink as well as feed all the others would do him in. I enjoy it and let’s face it, I might as well be out feeding calves as walking on a treadmill – not that I ever would walk on a treadmill but you know what I mean.

I happened to spot a conversation on twitter the other evening where they were talking about the hidden labour force – the wife and children who are unpaid but do a vital job. That’s the problem – so many people still view it as okay that it is hidden. There are farm women who don’t want to admit the amount of work they do on the farm, feeling it is somehow shameful. According to research by Sally Shortall (sorry I don’t have a link but it’s in a copy of a paper she sent me), many women downplay their involvement on the farm to protect the image of the man as farmer. They may influence many of the decisions but to the outside world, it seems to be important that the man is seen to be making the decision. Women need to practise saying over and over “I’m a calf rearer”, “I’m a poultry farmer”, whatever they do so they can claim ownership over it. Every dairy farmer out there, male or female, knows what a tough job calf rearing can be so it shouldn’t be undervalued.

Everyone who works on the farm should be appreciated and factored into the labour and wages for the farm. Our kids call themselves the “James SH1T Cleaning company” and they scrape down and lime the cubicles every evening. They know we appreciate them doing it and on the last day of every month, they present us with an invoice!

A farm business is a working partnership for so many couples as well as complete families – it’s about time more people and organisations woke up to the fact. A farm business is not a male farmer with a hidden workforce.

Update: Small world – the wife of the letter writer contacted me and it turns out I had interviewed her for my next book! Small world indeed!