I’ve always wanted to write a book, but there often seemed to be something else to be completed first I have about 40,000 words of a novel in draft and maybe I’ll get back to it this winter. In the meantime, I have another project in mind. Yes, it happens to be a book but different to a fictional novel……. 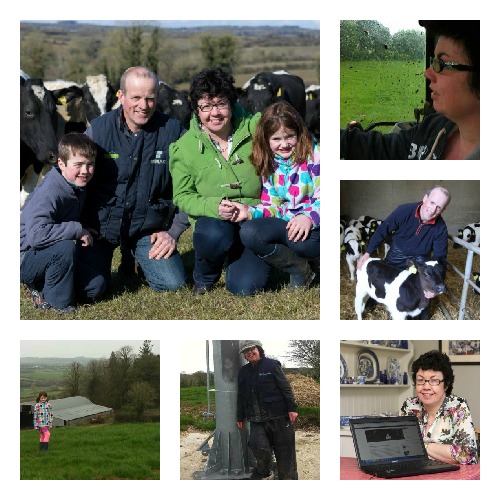 I’m grasping the nettle and I’m going to have a book published before Christmas! My ‘Advice to those thinking of marrying a farmer‘ post has been getting steady daily traffic from various search terms and some months ago, I thought to myself – maybe I could create a book from this. I wrote a couple of chapters, intending to send it to a number of publishers but never put them in the post.

Then, having attended a talk on crowd funding in Wales recently (see this post for some of the tips I picked up) and having being advised by some authors that self publishing can be the way to go sometimes, that is the route I have decided to take. 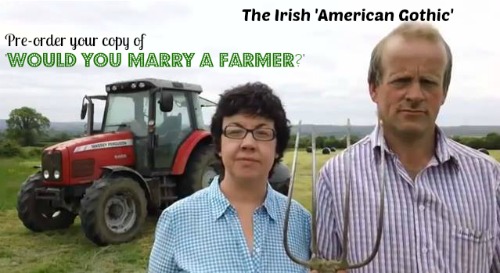 Wondering why we are looking so stern and holding a sprong? Read on …..

Partly so I can keep control over my book. If a publisher wants to pick up on it at a later date, then yabbadabbado but for now, I’m happy with self publishing. Depending on how it all goes, I might even add courses such as ‘How to write a book from your blog’, ‘How to self publish your book’, ‘how to run a crowd funding campaign’ to our list of courses at We Teach Social.

The traffic and response to that particular blog post has been huge, almost 50,000 views to date with so many people chuckling and empathising with what I have written. I just know this is a book that farmers and non-farmers will enjoy. I intend to have the book launch in November.

What Will The Book Be About?

The book will be about what is is like being married to a farmer, about farming life, about marriage and farming, about courtship, about how farming lives have altered over the years and yet has that much really changed?, about life for farming women, the humourous side of farming as well as the grit and the hardships. It will all be written in a tongue-in-cheek style, as true a representation as I can make it so farming folk can empathise with it and yet they will chuckle and chortle too.

It will be a beautiful and funny book and hopefully, if finances allow, it will have many quirky little illustrations throughout too.

Numerous reasons really – partly to raise part of the funds for the printing, proofing and illustration costs. Partly to see what the demand is for a book like this and to create a space where people can pre-order copies of the book (and other rewards) and feel part of the journey. Partly to ensure it will be finished and by a strict deadline. ?Partly to raise awareness of the book – rather than trying to promote a book just before it arrives on the shelves, crowd funding offers the scope to promote a project almost from its starting stages to its final achievements.

The funds raised will go towards part of the printing costs, the illustrations, getting it proofed and professionally laid out, and the photography.

I would so appreciate if you, my regular readers and my occasional visitors, could share this story with your friends and/or readers by linking to the campaign on Fund It. Rewards for pledges vary from pre-orders of the book, social media courses, adopting and naming some of our 2014 heifer calves to receive regular updates and having a blog created about your own adopted Garrendenny heifer. 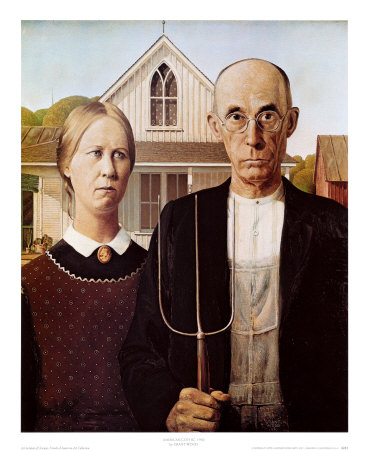 I’d really like to thank James Moxey of Ciric for his thoughts on my fund it application and to Amanda Webb of?Spiderworking?who shot and edited the video. She had the brilliantly creative idea of getting Brian and I to stand stern with a sprong between us as a parody of that?most famous painting of ?American Art – American Gothic by Grant Wood. We do look stern and I love it – I just hope everyone realises why we are looking so formidable 🙂 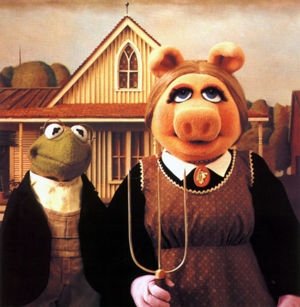 No prizes for guessing who these two are 🙂

I’ll be sharing extracts with you over the coming months as well as telling you about the journey of finishing the writing and the editing of this book, choosing illustrations, getting a printer, managing the crowd funding and getting this book onto the shelves.

For now, do watch the video and it would be great if you could share it and/or head over to Fund It to read more.

16 thoughts on “‘Would You Marry A Farmer?: Confessions of an Irish Farmerette’”