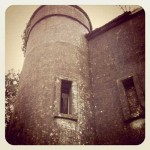 Garrendenny was often described as a “poor man’s castle’ consisting of relatively small rooms, one room wide in the 3 storey part with [...]