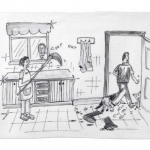 When you marry a farmer, you marry the farm and his whole family. As I mention in my book ‘Would You Marry A Farmer?‘, no matter how big a house is, it would be an unusual daughter-in-law and mother-in-law who find it large enough to contain the two of them without too many arguments. It’s often just the different personalities and ways of doing things that leads to a building of friction. The problem is that friction can intensify until you are both at screaming point. The Australians have an unwritten rule (and remember the isolation of many farms out there – there may be only those two houses for miles) that neither farming household should be able to see the other’s clothes lines!

The following differences between a potential woman and her mother-in-law are probably closely modelled on my mum and I. It reveals me to be somewhat lacking in the domestic goddess department. I often think how lucky I am that it’s my mum that lives near us as she only has herself to blame for having brought up a daughter to be so undomesticated!!! Luckily she loves me and I hope she still thinks I’m wonderful!

On a serious note though, life is very different now to what it was like when our mums and mothers-in-law were our age. Partly because of the marriage bar in Ireland until 1973 and partly because farming was more profitable in the 80s (for example, apparently a farmer was able to make the same income from 25 cows in the 80s as 80 cows now) many farming women then didn’t go outside the home to work. While many would have worked outside on the farm, many would have spent their time looking after children and doing the housework. While female farmers work on the farm, farmers wives are often looking after the home, sorting kids, working part time or full time off farm and getting home from work to find contractors waiting for food or farm paperwork waiting.

Mother in Law as depicted in my book 🙂

What do you think? Am I way off the mark or can you think of any other differences?