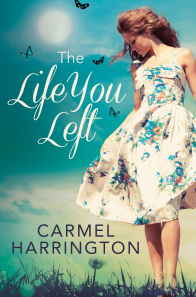 ??during the Wexford literary festival and the launch was held in Enniscorthy castle so it was a nice chance to see a little bit of the castle interior too.

I’m going to make an admission here – I read quite a lot of different genres, even more so now that I’m getting to know more authors. Crime and historical fiction are amongst my two favourite genres and I do enjoy a good contemporary novel too. I don’t read much ‘chick lit’ or ‘women’s fiction’ though apart from the occasional Irish author’s such as Maria Duffy or Sinead Moriarty. ?I loved the front cover of Carmel’s book but when I read the blurb on the back with recommendations from BestChickLit.com and saying it was for fans of Cecelia Ahern I wasn’t sure about the heavy emphasis on chick lit. Not that I’ve anything against Cecilia Ahern, she is a very popular author, it’s just I’m not the best fan of that genre.

The Life You Left promises to be more of a ‘gritty’ book though, Sarah has been left by her husband Paul and she has no idea where he is. She has 3 young children to look after and their savings account has been emptied. How is she going to make ends meet and how she is going to find her husband? The two men in her life are her twin brother James and her angel Edward. ?A slight problem exists as no one else can see or hear Edward. ?Angel – you say? Yes, I was a little sceptical at first too especially as he dominated the first few pages but then I thought to myself, I may not believe in angels but I do kinda believe in ghosts out there so it was easy enough then to go with the flow.

Although this is written in the ‘chick lit’ style, the plot could easily fit into a crime novel or perhaps even a thriller. Set in Co. Wexford, a young woman is brutally murdered and found on the beach. Sarah had a dream about it before it happened and she realises that her premonitions have returned – she can see events that may happen in the future – accidents that result in deaths, suicides, murders, who the murderer is. The question is – can she see enough detail in her dreams to find the murderer and can she prevent some of the more macrabre of the events? More importantly, can she find her missing husband and work out why he left?

There’s plenty of keep you turning the pages and yes, it does pull at the heart strings. There was one particular scene that, as a mum, it made tears flow from my eyes. ?I can see this one doing well in the charts – definitely up there amongst Sinead Moriarty et al.