Most of the calves are weaned now or down to once a day feeding. We have had a few calves that were poorly and have recovered thank goodness although one seems to have had a bit of a relapse. As I reverted back to feeding him this morning with a large bottle again, it struck me how one sick calf can absorb as much time as 50 healthy ones. When they are healthy and feeding well, it really is just a case of checking them, bedding them and feeding them – literally chucking the milk in, giving them meal and ensuring they have fresh water. 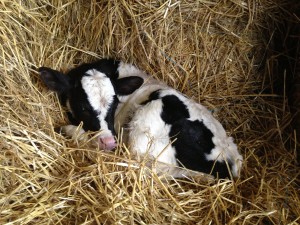 When they are sick, they feed slowly, they keep needing a rest. It’s not too bad if they are isolated from the others, you can stand or kneel relatively comfortably beside them and let them take their time. I notice myself doing what lots of bottle-feeding mums do, as the sick calf takes a rest from feeding, I put the bottle the right way up again so I can measure how much has been drank, sigh and try again. That was one huge advantage with breast feeding – I never had a clue how much had been consumed, just presumed they had enough as they grew in front of my eyes. Anyway, he is on the mend and drank a full bottle this morning (two litres) which is about two thirds of a normal feed.

I was at a Charisma Bootcamp taught by Owen Fitzpatrick for two days the end of last week. It was absolutely brilliant and I’ll be blogging about it again – it was all about improving your presentations, business presence, how to improve business and personal relationships etc. ?You may think that people either have charisma or they don’t but that’s not the case at all. Charisma is something that is reflected in how others see you – you can control how others see you to an extent. Yes, some people will see you as incompetent no matter what you do and some people are natural begrudgers and won’t like you because you are successful but you can influence others to an extent – if you want to!

Listening to the radio the other evening, the presenter was making a comment that ten year olds now don’t accept compliments. If you tell them their artwork is good, they will deny it, they just won’t accept the compliment. Owen got us to do an exercise where we had to tell the person beside us three good characterisations about ourselves and one not so good thing. Well, the ‘not so good’ was easy, which one would I choose? I opted for ‘intolerant’. To be honest, while I recognise it may be a character flaw, I’m quite happy being intolerant at times ?- don’t have to suffer fools at all. But the positive – that was a tricky one and I realised how it can be very difficult to praise ourselves. ?I said to my partner ?’Well, I’m a writer now so I guess I’m creative’. I can’t remember what I said for the second one but for the third one I decided on ‘being a good mum’. ?Now, I didn’t come up with that one just because my kids are the best in the world so I reckoned my nurturing must have played a small part. ?I realised afterwards that the reason it came into my mind was because every night when I am kissing my 9 year old daughter goodnight, we exchange compliments. I have always told the two of them that they are the best boy and girl in the world etc but about a year ago, K started returning the compliment. So I tell her she is the best daughter in the world and she replies that I am the most wonderful and amazing mum in the whole universe and we exchange compliments for about five minutes. She cuddles down to sleep or turns to her book feeling happy and I leave her bedroom feeling all warm inside. 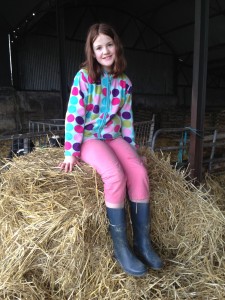 Some may say that telling kids that their work is good is not a sensible idea if it isn’t and I would agree with that but there’s no harm in exaggerating sometimes too. I love knowing that my daughter thinks I’m a good mum – let’s face it, it won’t be that long until she will feel I know nothing so I might as well enjoy it while it lasts.

Much more on the bootcamp coming up over the next week. I first met Owen Fitzpatrick?at the end of 2008 when he came down with the senior producer of ‘Not Enough Hours’ to see me about appearing in the programme as my organisation was, let’s just say, lacking. I can remember thinking that RTE were probably sending down some terribly anally boring time management nerd – however, it couldn’t have been further from my perception, I can honestly say I have never laughed so much in a training. If you ever get a chance to attend one of his talks – do!

And yes, making encouraging noises and giving compliments to poorly calves can help them feel better too – I’m sure of it! I hope the calf thought I was being charismatic this morning.

8 thoughts on “Calves and Charisma”