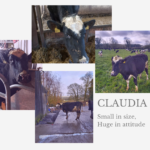 It has been a busy spring between calving, the building of a new milking parlour complete with rebuilt collecting yard and other ancillary expensive essentials, and now of course, we have coronavirus to think about. But this post is going to be about another C – a cow called Claudia. 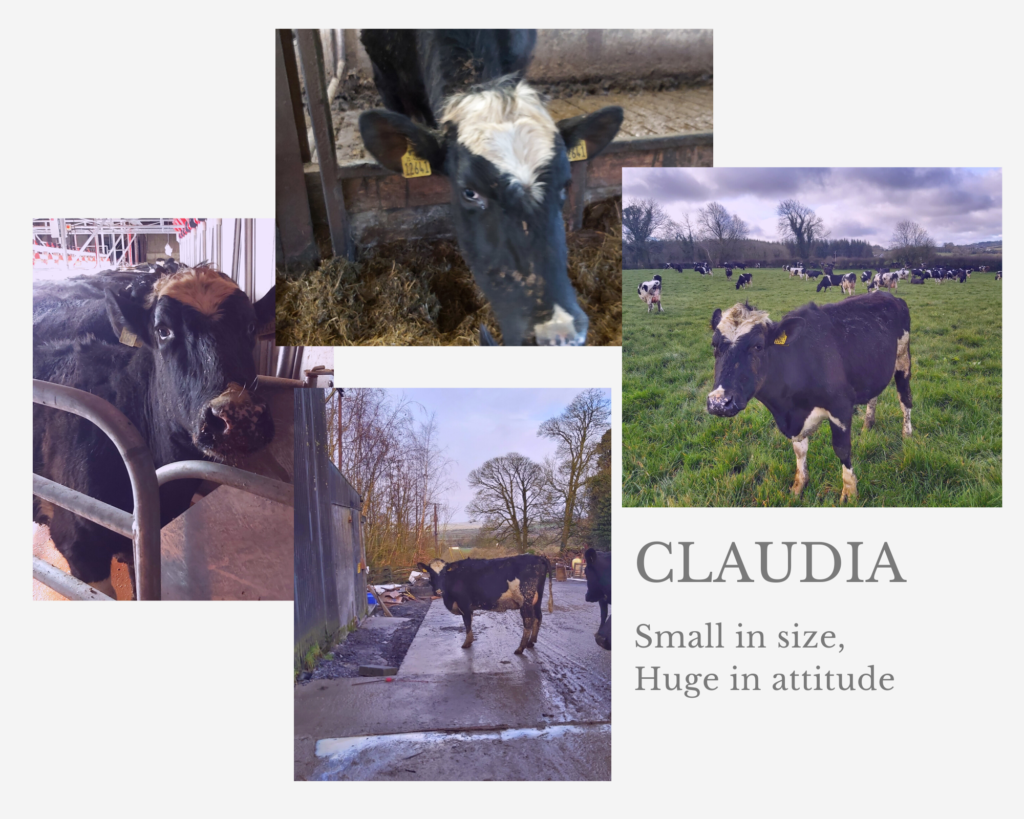 Claudia, small in size and big in attitude

Every year, there are calves and cows that are special or noteworthy for some reason and Claudia was noticeable from an early age. She was a squirt, a lot smaller than the other calves. As a result, she got milk for longer as I gave her more time to grow before weaning her. When herding, I was often one calf short when I counted them and invariably it would be Claudia that was missing, small and hiding behind another calf in the crowd. Even when we were TB testing and the vet’s assistant realised she was missing one calf from the tally, yes, it was 641, Claudia. She always had a bad hair day with her white shock so I just had to call her after Claudia Winkleman with her perfect glossy fringe.

We sell between 25-30 maiden heifers every year, keeping the best for ourselves and a few of the worst for one reason or another – usually because they are small and Claudia fell into that bracket, not that she was one of the worst but more a mid-range in terms of her EBI. She had plenty of time to grow though and as her pregnancy advanced, I was a bit concerned as she was almost as wide as she was tall. She would be one of the first to calve and had a sizeable bull calf.

What was she going to be like in the milking parlour I wondered. Would she be quiet and demure or would she display her typical mischievous personality?  Thankfully, the parlour was just about ready when she calved so we  only had to milk her once on the mobile milking machine. She adapted very well, didn’t even attempt to kick off the cluster, mainly because she was so engrossed in eating tasty dairy nuts.

She certainly has a personality that makes her stand out. Before our feeders were working in our new parlour, we had to fill all the troughs with dairy nuts before the cows filed in. She liked being first and would skip up along, stopping to snatch a mouthful of nuts from at least two troughs before she reached her own at the front. Now that we can fill the troughs with the click of a button, she likes being at the back and will stop on the way out to check if any other cows have left a few nuts.

For about four weeks, the cows had to exit the parlour at the front and walk by the new dairy. The dairy didn’t have a door on it and I was usually there (with my dog Lou) to ensure the cows stayed within the wires and filed around to the shed. I was also feeding calves so sometimes arrived out to see the cows sniffing at the dairy door although Lou usually kept them in order. One evening, I caught Claudia drinking milk from the ‘dump milk sink’ after having shut the rest of the cows out. The lights weren’t wired at that stage and she had walked down the back of the bulk tank and loitered down there in the dark (as evidenced by her poo which we noticed the next morning) before sauntering back up to help herself to milk.

She is still small but definitely larger than life with buckets of personality. She tosses her head in mock defiance when chastised and told to get a move on. She always has a bad hair day and looks grubby and unkempt, having rubbed her head in any sandy bank or mud she can find. It’s impossible to get a decent photo of her too, she refused to stand still. She does make us laugh though – and isn’t that what life should be all about?

If you would like to read any more stories about our cows, do check out my book Till the Cows Come Home, available from bookshops,  Amazon and Black and White Publishing.